Debbie Reynolds became known as “America’s Sweetheart” when she started acting in the 1950s. Her wholesome image resonated with fans during films like Singin’ in the Rain, The Tender Trap, and Tammy and the Bachelor. 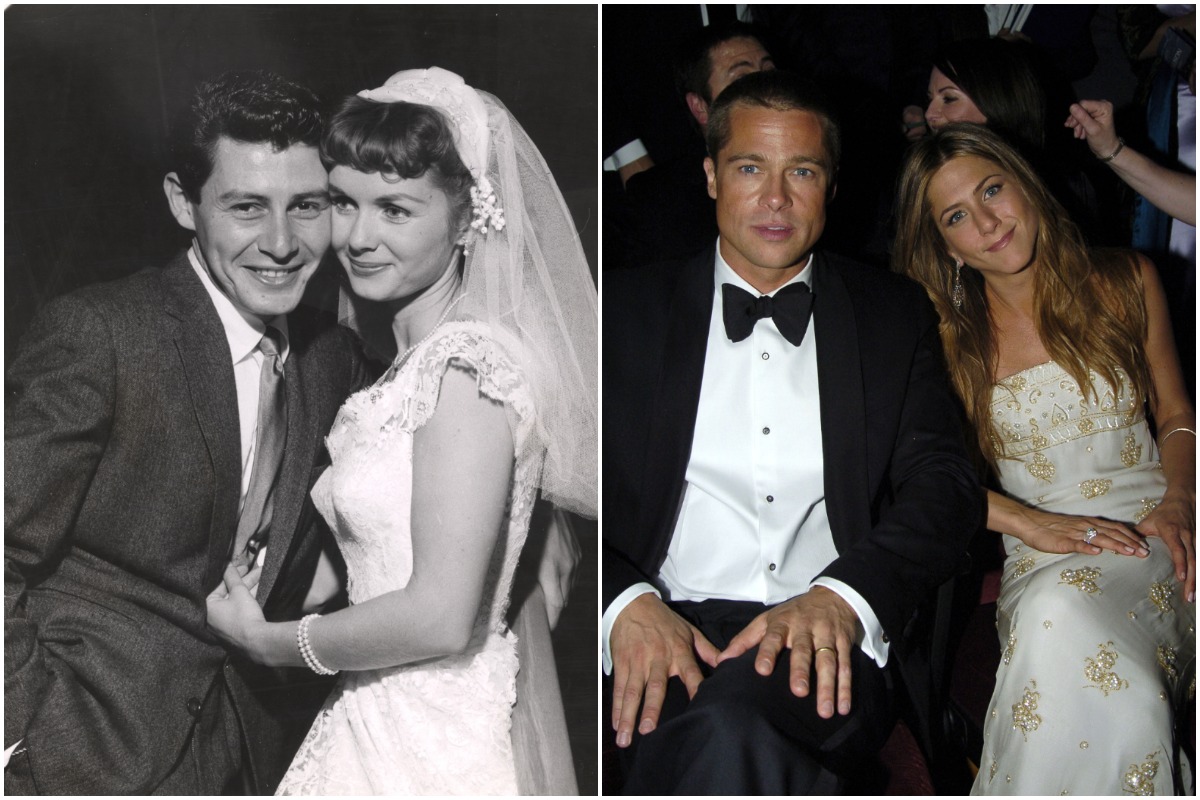 In 1952, Reynolds met singer Eddie Fisher. At the time, the two were some of Hollywood’s brightest stars. Fisher performed several hit songs such as “Thinking of You,” “Any Time,” “Oh, My Pa-pa,” throughout his career. After three years of courtship, Reynolds and Fisher got married. One year later, the couple had their first child together, Carrie Fisher. Their son, Todd Fisher, was born in 1958. Reynolds and Fisher were soon featured in multiple magazines and garnered a reputation for being the quintessential couple.

Aniston’s acting career catapulted in 1994. After a few small roles films, she landed her first starring role as Rachel Green on Friends. The show made Aniston a household name, and the public praised her for her kind persona. In September 1999, Aniston’s love life became public fodder. She and Brad Pitt confirmed that they were together at the Emmy Awards. Two months later, they announced their engagement at singer Sting’s concert, per Marie Claire. Pitt and Aniston tied the knot in Malibu on July 29, 2000.

Debbie Reynolds compared herself to Jennifer Aniston for this reason

Reynolds and Aniston both faced heartbreak at the height of their careers. In 1958, Fisher’s best friend, Mike Todd, died in a plane crash. Todd was Elizabeth Taylor’s third husband, and she and Reynolds were close friends. After Todd died, Reynolds suggested that Fisher comfort Taylor during her grief. She soon learned that Fisher and Taylor were having an affair and were planning on getting married.

“My first husband ran off with Elizabeth Taylor, Reynolds told The Sun. “A light suddenly dawned. He was away working in New York and staying at the same hotel as Elizabeth. So I phoned her room — not his. He picked up the phone, so I said: ‘Eddie, do you mind rolling over and telling Elizabeth I want to talk?’”

Fisher divorced Reynolds on May 12, 1959, and married Taylor that same day. The scandal followed the entertainers throughout their careers. Like Reynolds, Aniston dealt with her husband falling for a fellow starlet. In 2004, Pitt started working alongside Angelina Jolie. While filming Mr. and Mrs. Smith, Pitt and Jolie fell in love with one another. Shortly after the movie premiered, Pitt and Aniston filed for divorce. Pitt started dating Jolie publicly, and they eventually married in August 2014. Reynolds compared her scandal with Fisher and Taylor to Aniston’s in 2013.

“I stood no chance against her. I was just like Jennifer Aniston with Brad Pitt when he fell in love with Angelina Jolie,” she said. “If Angelina wants someone, then that is that. Certain women have that power. What chance did I have against Elizabeth, a woman of great womanly experience, when I had no experience at all?”

Following their public divorces, Reynolds and Aniston’s careers continued to flourish. Reynolds received praise in the media for raising her two young children on her own after Fisher left. In his memoir, My Girls: A Lifetime with Carrie and Debbie, Todd Fisher confirmed that his father and Taylor’s careers suffered while fans protected Reynolds.

“The world was stunned,” he wrote. “Eddie and Elizabeth were vilified. Eddie was declared a philandering, opportunistic loser, and Elizabeth was labeled a bad-girl, home-wrecking slut. Debbie, the good girl, the innocent, unsuspecting victim, and single mom, was globally embraced with love and sympathy.”

Aniston also continued to work after her she finalized her divorce from Pitt in 2005. She starred in several films like Horrible Bosses, Marley & Me, and The break-up. She and Pitt are now friendly and appeared together at the SAG Awards in January 2020.