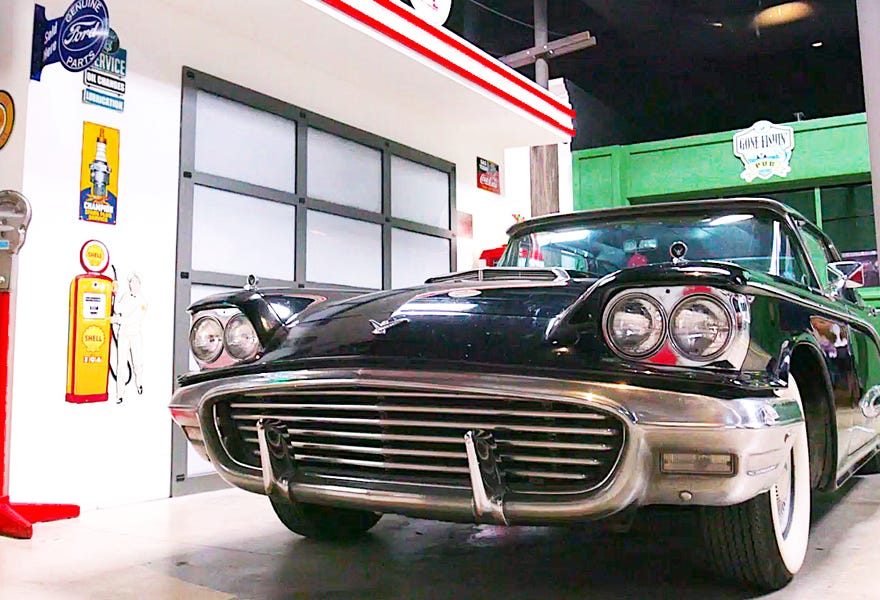 Following is a transcript of the video.

Narrator: No, this isn’t a movie set or a theme park. This anachronistic place has a greater goal than entertainment. Glenner Town Square is a treatment center that’s helping improve the lives of people with Alzheimer’s disease and dementia.

The facility is named after Dr. George Glenner and his wife, Joy. Dr. Glenner was a renowned Alzheimer’s researcher whose discoveries led to significant advancements in understanding the disease. The town replica sits inside a 20,000-square-foot building in Chula Vista, California, about 7 miles south of San Diego and 5 miles north of the Mexican border. But it looks nothing like its modern city neighbors. Instead, Town Square is designed to look like a town from somewhere between 1953 and 1961, meant to reflect the era when most of the participants were young adults.

Scott Tarde: People make their strongest memories typically between the ages of 10 and 30. And if you think about it, the reason that that is is because people typically have a lot of life’s firsts at that time. Graduating high school, graduating college, marriage, children, jobs.

Narrator: Helping people recall and discuss these major life events is part of reminiscence therapy, one of the core concepts of Town Square’s program. Reminiscence therapy often uses prompts like old photos and memorabilia to elicit reactions, trigger memories, or improve the mood of people with dementia. The therapy isn’t a cure for Alzheimer’s, but it’s been proven to help ease some of the confusion and agitation that people can often feel. But instead of just a single photo or object, the town offers a more immersive experience with the idea that it will have an even more powerful effect.

Narrator: Sonia Bland has seen her mother improve since she started coming to Town Square.

Sonia Bland: Mom was always very social, and when we received the diagnosis, she kind of withdrew. She’s a lot happier these days. We’ve noticed she rests a lot better at night. She looks forward, in the morning, to getting ready and going, so there’s more purpose for her. In the last six months, there has been no decline.

Narrator: Being able to drop her mother off four days a week is a huge help to Sonia. She goes to work on those days and gets to take a break from caring for her mother 24-7, and Eva gets to participate in activities she likes, like painting and dancing.

Narrator: Town Square participants rotate through a series of activities, spending about 45 minutes in each place. There are 11 different storefronts, but participants typically only visit around four or five in a day. There’s a pet shop with birds and fish where participants go for pet therapy. The central town square, called Glenner Park, is where they play bocce or do group exercises. Inside the retro diner, participants eat lunch, socialize, and play bingo. Next to the diner is a mock pub where people can shoot some pool or play poker. And across the street is Joy’s Department Store. Inside Joy’s, participants can browse clothing or attend a class. This group is taking a jewelry-making class. The movie theater plays old TV shows and films, and there’s even a vintage Thunderbird to tinker with or just admire.

As part of the intake process for the program, caretakers fill out a form detailing information about the participant and their past. This allows Town Square staff to focus on particular activities that are meaningful to each individual. One participant had been a barber, so the staff at Town Square asked him if he would help out at the barber shop, called The Silver Fox. A visiting beautician comes to the shop a few times a month, so they asked if the former barber would consult on haircuts and help out with inventory of supplies.

Scott: We encouraged him that we really needed his expertise, and then all of a sudden you could see that kind of spark and that trigger of purpose.

Narrator: Scott wants to be able to give that sense of purpose to more people.

Alzheimer’s disease affects an estimated 5.7 million Americans, and if no cure is found, experts predict that number will keep growing. Currently, Town Square serves about 200 people in the Chula Vista location, but they have plans to expand. Town Square has partnered with Senior Helpers, a company that provides senior-care services. They aim to bring more facilities like this one to cities across the nation.

Before Eva Casillas got Alzheimer’s, she was a caretaker for her mother, who also had the disease. Now, Sonia fears she, too, will get Alzheimer’s.

Sonia: You know, there is some fear that in the future, if there’s no cure, I may need to keep my mind busy and healthy.

Narrator: But Town Square has been a big help to Sonia’s family, and she hopes it will continue to help people in the future. With the growing need for senior care, not only for those with dementia but for the whole aging population, Scott sees this as an issue that shouldn’t be overlooked.

Scott: I don’t see healthcare as a political issue. Healthcare’s a right. It’s not a privilege. At a very basic level, people deserve the right to be taken care of. I get goosebumps when I talk about this because people need to know that these services exist, and they shouldn’t be hidden or a puzzle. Most people don’t think about Alzheimer’s disease until it’s upon them, so, you know, let’s get the dialogue going.

EDITOR’S NOTE: This video was originally published in May 2019.