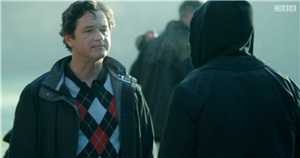 Line of Duty’s most recent episode was yet another to leave viewers on the edge of their seats.

During a particular tense interrogation interview scene with DI Joanne Davidson, her family ties to Tommy Hunter were unveiled, but who is he?

We’ve heard Tommy’s name crop up several times in the new series, and Tommy Hunter is a big part of Line of Duty history. Here’s what you need to know…

Who is Line Of Duty's Tommy Hunter?

Tommy Hunter was a big part of the first two seasons of Line of Duty, so if you’re a fan then you may well have caught him on the show then.

The part is played by Brian McArdie, and the Glaswegian is the first leader of the OCG.

Tommy was unmasked as a paedophile and he employed Matthew Cottan to do work with him at Edge Park Golf Club.

Tommy enticed Cottan into a world of crime and go him to join the police so that he could have someone on the inside.

Tommy also had Dot to inform him from the inside, and he started blackmailing police officer Tony Gates and tortured Steve Arnott to discover what AC-12 knew about his activities.

In exchange for immunity from prosecution, Tommy began to work alongside Central Police but he was killed in the second series when a vehicle escorting him was ambushed.

He survived the initial attack, but was later killed by DC Cole who disguised himself as a nurse and injected air into his IV line.

And if that wasn’t enough drama, now Jo Davidson has been revealed to be a “partial DNA match” to Tommy.

The DNA match took centerstage in episode six and it was revealed that Tommy Hunter is both Jo Davidson's uncle and father.

Jo reveals her mother was raped by her father but was forced to keep the child, and when Jo was 16 Tommy forced her into the police force ”to do his bidding and be under his control.”

Jo’s mother then committed suicide as a result.

Last night fans also thought they picked up a clue given away by DS Patricia Carmichael, played brilliantly by actress Anna Maxwell Martin.

They spotted that she could have given away a vital clue in the complex hunt for ‘H’ or the ‘fourth man.’

During a particular tense interrogation interview scene with DI Joanne Davidson, DS Carmichael appeared to tap out ‘H’ in Morse code – something long-running Line of Duty fans will know and recognise from previous series of the hit drama.

And now fans of the show are convinced that Carmichael’s four taps – which spell out ‘H’ in the SOS language – could mean she has outed herself as criminal mastermind ‘H.’

“Don’t mean to alarm anyone but (eye emoji) at Carmichael’s pen? Tapped four times and H in Morse Code is * * * *” one viewer said, as others lined up to agree with them.

“Is Patricia Carmichael ‘H’ with the obvious pen tap?” another asked. As yet another added to the conversation: “Carmichael is H. She tapped her pen four times – H in morse code – and took a sip of water. The guilty ones always drink water in the interview room.”