Welcome to Multi-Millionaire’s Row: Britain’s most expensive roads include the London street where an average home costs £36m – while outside the capital Surrey takes the crown

London has the most expensive houses in Britain but parts of the South East are hot on its heels, new research revealing the country’s priciest addresses has revealed.

The capital is home to the top 10 most expensive streets in the country, Zoopla data shows. It also identified the 10 streets with the highest average property price outside of the capital.

London’s most expensive road is Kensington Palace Gardens, home to celebrities and embassies, where the average property is worth £36million. Outside the capital the most expensive address is Montrose Gardens, in Leatherhead, Surrey, where a home costs £6million on average.

With house hunters seeking more space and greenery as a result of lockdown, these areas in the South East have increased in popularity as they provide good commuter access to London, according to the property website. 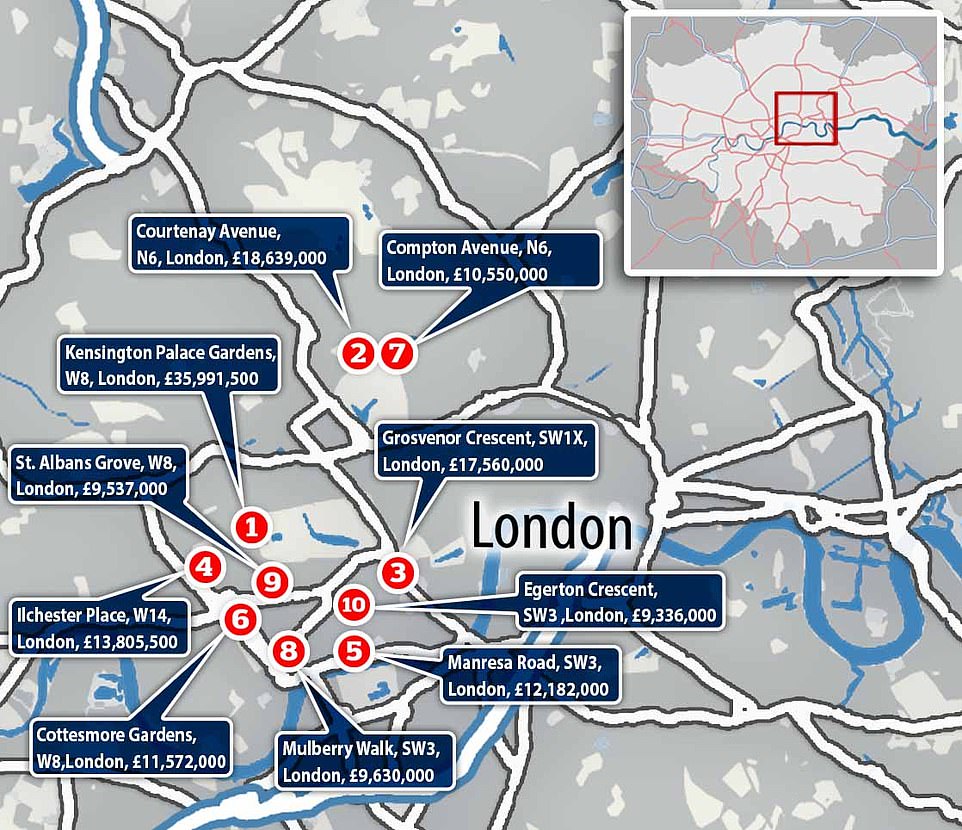 Gráinne Gilmore, of Zoopla, said: ‘Lockdown led to a once-in-a-lifetime reassessment of housing needs, with some city dwellers now in search of more space, fresh air and easy access to the countryside.

‘For some Londoners, the greenery of the commuter belt and beyond has become a more attractive option and that is reflected in increased demand across the south east.

‘With more people able to work flexibly in the wake of Covid, many are re-evaluating their work life balance and embracing the opportunity to live that bit further from the office amid the rolling countryside or even by the coast.’ 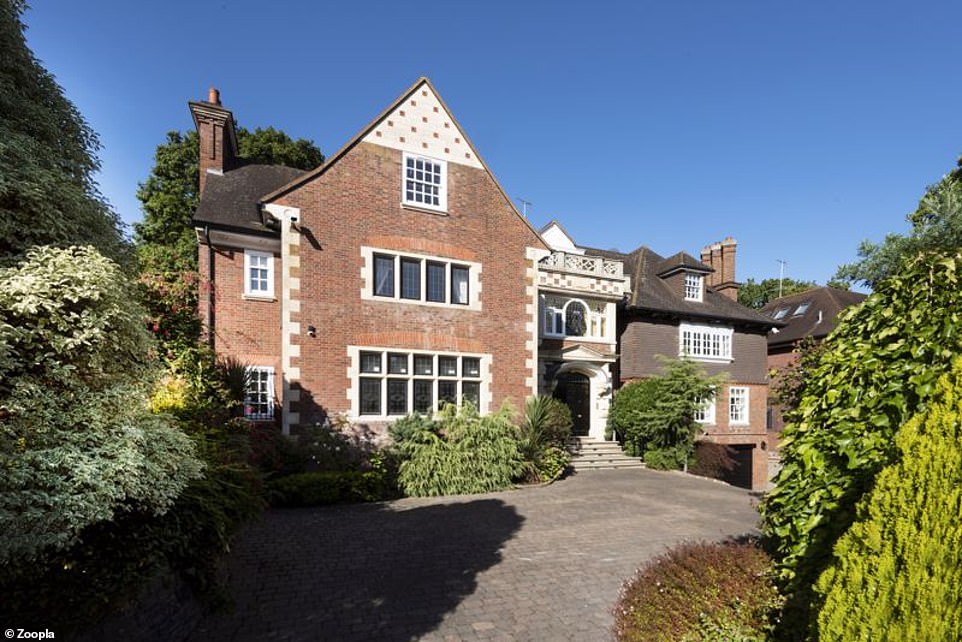 The most expensive roads in Britain are in the capital with this eight-bed detached house in London’s Courtenay Avenue for sale for £16,999,999 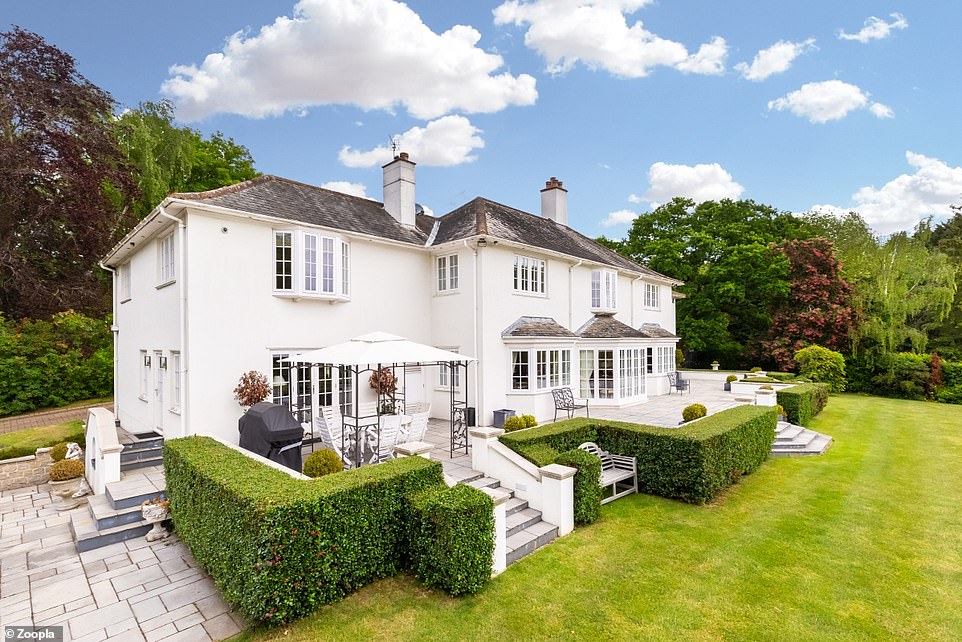 This five-bed detached house for sale in Theydon Road, Epping, Essex has an asking price of ‘offers over £3.5million’ 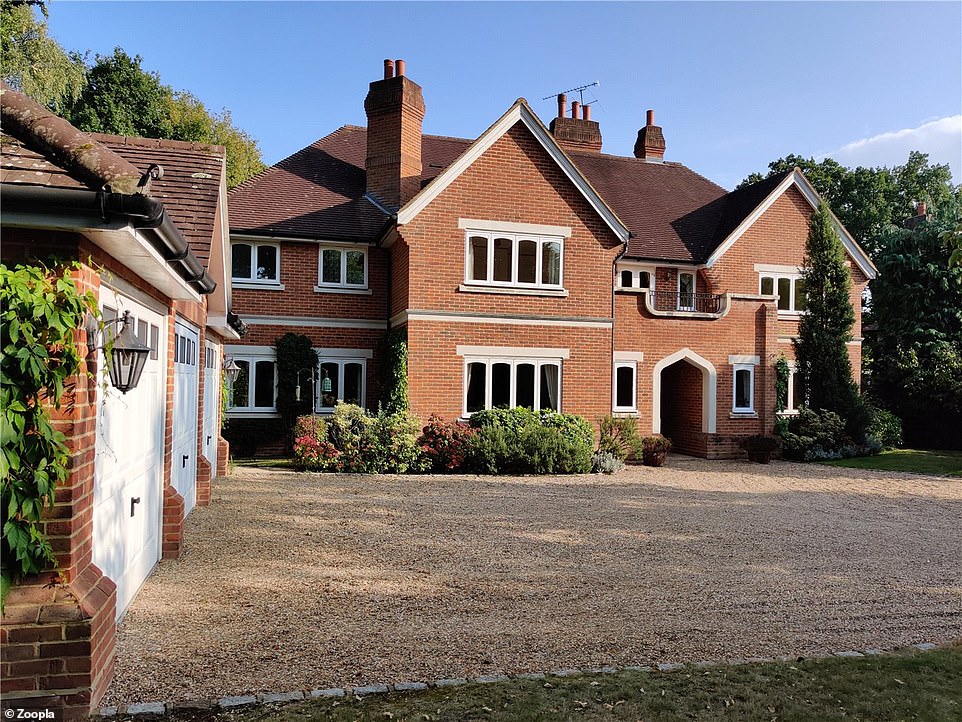 This five-bed detached house in Virginia Water, Surrey is for sale for £2.95million

Outside of the capital, Surrey takes the crown for the most expensive place to live, with Montrose Gardens in Surrey’s Leatherhead, seeing the heftiest price tags outside of London, with an average property value of £6,037,000.

It is ideally located between the countryside of the Surrey Downs and the outskirts of London.

Having become Britain’s first ‘million-pound town’ several years ago – two other streets in Virginia Water also feature on the list. 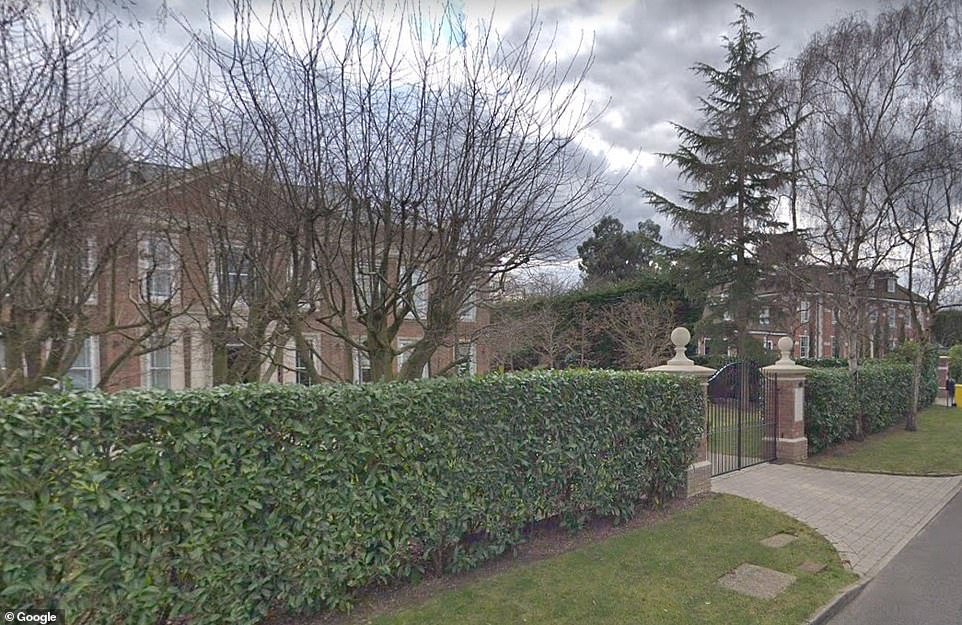 However, it is in London where you’ll find the priciest road in Britain – and for the twelfth year in a row, it is Kensington Palace Gardens.

It is often cited as one of the ‘most exclusive addresses’ in London, with embassies, diplomatic residences, and the homes of ultra high net worth individuals, including steel tycoon Lakshmi Mittal and Chelsea F.C. owner Roman Abramovich.

It is followed by Courtenay Avenue in Highgate for the second year running, which has an average price tag of £18,639,000.

For those with pockets deep enough to purchase a property on this street, there are currently a number that are for sale to choose from, including an eight-bedroom detached house that boasts its own swimming pool, a leisure centre and 24-hour gated security – all for £16,999,999.

Three new entrants in the list include Chelsea’s Mulberry Walk in seventh place, with an average asking price of £9.63million.

St Albans Grove in Kensington is in ninth place and has an average property value of £9,537,000. It is a short walk from Kensington Gardens, and a five-bedroom flat is currently on the market on the street for £9.25million, while Egerton Crescent makes up the list in tenth place. 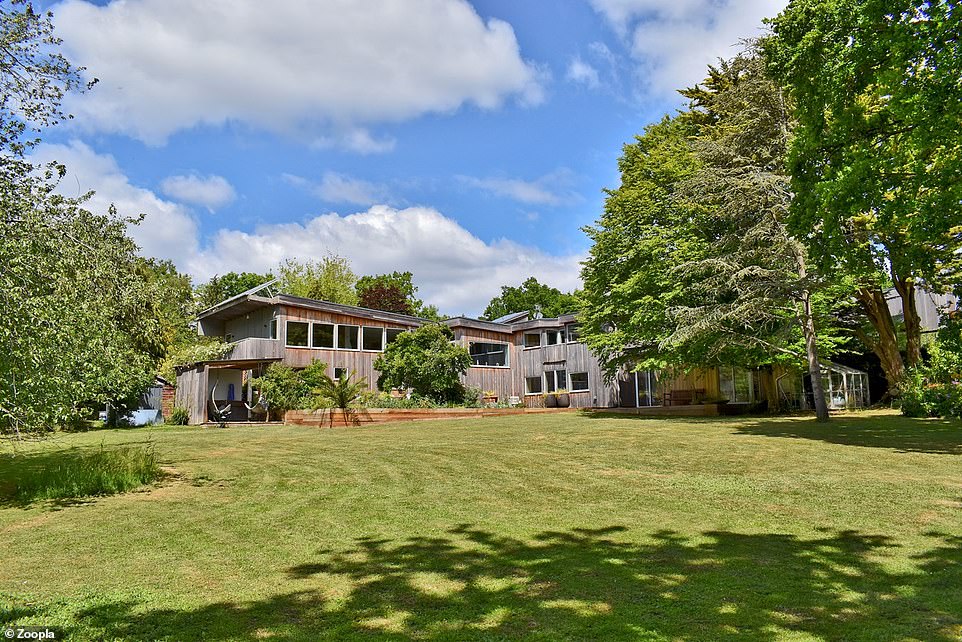 In the countryside: This four-bed property in Beaulieu, Hampshire, is for sale for £2.5million

Priciest streets in the largest counties

The most expensive streets in Britain’s largest counties – by population – have also been named by Zoopla.

Montrose Gardens again tops this list, but in second place is Philippines Shaw in the Kent Downs with an average property price of £4,225,000.

Dock Lane in Brockenhurst is Hampshire’s most expensive street with an average property value of £2.41million and is in third place, with a four-bedroom eco-mansion currently on sale for £2.5million.

Next on the list is Theydon Road in Epping, Essex – a sought-after location due to its countryside feel, yet close proximity to London.

A five-bedroom detached home on the street is currently for sale for £3.5million – albeit more expensive than the average property value on the street of £2.7million.

In fifth place is The Avenue in Altrincham in Cheshire, which is an area popular with Premiership footballers. With an average property value of £2,297,000, it is Greater Manchester’s most expensive street. 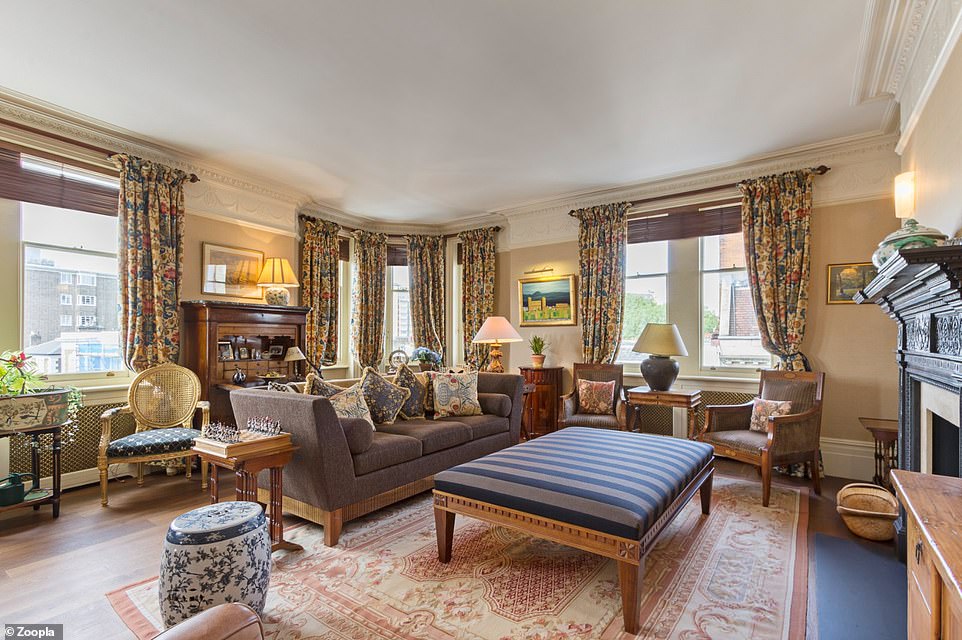 Outside of the capital, Sevenoaks in Kent is the postal town with the most expensive streets – a total of 188 – and is followed closely by Guildford with 183 and Reading with 179.

A regional analysis of the data shows that of the 12,545 streets in Britain with an average property price of £1million and above, 4,707 are found in the south east and 4,523 are concentrated in Greater London.

Ms Gilmore added: ‘Zoopla data shows where housing stock and prime locations converge to create some of the most expensive addresses in the UK.

‘Clusters of expensive homes are not unusual as the cache of an area starts to create an appeal of its own, which can factor into what a home is really worth.

‘London dominates the country’s prime property market, but it is being challenged by the south east in terms of the number of million pound streets, reflecting the rise in demand and pricing seen in this market, as well as its housing stock mix and its geographical size.’