On a crowded train, I had no choice but to listen to the phone conversation being conducted by a florid-looking man in a shiny suit, who, it soon became apparent to the whole compartment, was conducting a job interview. 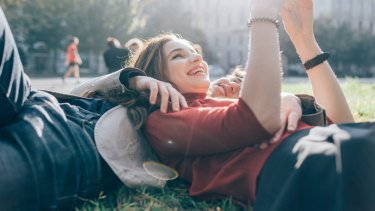 With no gold-plated pension to look forward to, working well into your 70s will be the norm for many Millennials.Credit:Shutterstock

I was wondering how his life was so busy that he couldn't find somewhere quieter to have this sensitive conversation, when I heard him say to the hopeful applicant: "How do you feel about managing Millennials? They're not like us, you know. Don't have the same work ethic."

I considered tapping him on the shoulder and reminding him that age discrimination is illegal and cuts both ways, but from the size of the enormous cup of coffee he was sipping, I thought it unwise to confront someone so over-caffeinated.

I was reminded of my train companion when I read of the latest salvo by a baby-boomer against Millennials. "They expect to have a nice time," author Danielle Steel, 71, recently said in an interview.

"And, pardon me, but I think your 20s and a good part of your 30s are about working hard so that you have a better quality of life later on." She added: "I never expected that quality of life at 25. I had three jobs at the same time, and after work I wrote. Now it's a promise that it's all going to be fun."

The reason for her ire seems to be that one of her nine children had told her he liked to leave the office by a certain time to preserve his work-life balance, and that when she was shown around the headquarters of online shopping giant Amazon, there was free food.

Her comments may have resonated with many who think the so-called snowflake generation has it too easy at work. But who's really in the right here?

I began my career in the heyday of newspapers. Every waking hour was devoted to the job, and non-waking hours, too, with bosses thinking nothing of phoning people up in the middle of the night: food, free or otherwise, didn't get a look in, but the day always ended with a compulsory session in the pub.

Marriages failed, children grew up barely knowing their fathers and few women made it to the top in those conditions. The financial rewards could be good. But when an outing was organised for the retirees of a newspaper I worked for… only four were found to have survived into the sunlit uplands of their seventh decade. The rest had died from heart attacks, strokes or liver damage.

I doubt any self-respecting Millennial would tolerate being phoned up in the middle of the night by their boss, but smartphones mean we are all now, whatever our age or job title, constantly available. This is despite the fact that, after a decade of wage stagnation, the rewards for being on call 24/7 are much less.

House prices make home-owning a distant dream for many young people. And with no gold-plated pension to look forward to, working well into your 70s or beyond will be the norm for many.

I was like Wile E Coyote running over the cliff face, legs still pedalling furiously in the air.

For me, when I was made redundant from my high-powered job as a magazine editor, I carried on initially at my usual frenetic pace working 80-hour weeks. I was like Wile E Coyote running over the cliff face, legs still pedalling furiously in the air, taking on complicated projects, acquiring more qualifications, until one morning I missed a 9am meeting because I was simply too exhausted to get out of bed. It caused me to rethink my priorities and "Marie Kondo" my working life.

Now I only take on work that "sparks joy". And I no longer exist on ready meals because I am too busy to cook, or need someone to walk my dogs or tend my own garden.

Danielle Steel's formidable work ethic has resulted in her publishing 179 books, generating a fortune of around $500 million, despite, as Publishers Weekly slyly noted, "a resounding lack of critical acclaim". And all while being married five times and raising nine children. She claims to work 20 hours a day and take only one week's holiday a year.

Over her desk, which is shaped to resemble three of her bestselling books, hangs a sign that reads: "There are no miracles. There is only discipline."

Good for her. But perhaps an even better desk accessory might be a vase of beautiful roses…and a sign reminding her to smell them occasionally.