Greg Stone is an actor best known for appearing in more than 70 stage productions, and is about to appear in Girl from the North Country in Melbourne. He is currently in a relationship. The 60-year-old opens up about his first kiss, what his children have taught him, and why he doesn’t feel the need to remarry. 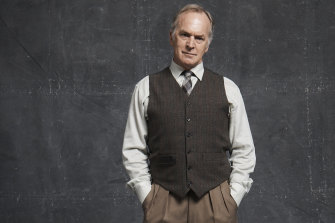 My maternal grandmother, Olive, was a petite woman always full of laughter, big hugs and stories. She looked after me when I was very young because my mother, Jenny, worked full time. Her ability to tell stories had a big influence on me.

In the 1970s, Mum was a secretary of a football club. It was unusual for women to work full-time in this era. My father, Roy, was well loved but unreliable; it was Mum who kept our family together – and still does. She is a strong and powerful woman who ran the house, mothered three kids, worked a 9-to-5 job, then would come home to cook dinner. She was firm but fair.

Mum met Dad when she was 15 and they married when she was 18. He was a farmer. I think she thought she was marrying a rich farmer but it didn’t work out that way. Dad died 10 years ago.

Mum has a new boyfriend, an old childhood sweetheart. They met five years after Dad died. She told me she never thought romance was possible after his death, but in her early 70s she found love again.

I got into the National Institute of Dramatic Art at 19. Mum has always been supportive of my decision to become an actor, although she wanted me to also have a secure job to have something to fall back on. I told her I didn’t intend to fall back. She still worries about me even though I’m 60!

I have a sister, Jenny, who is three years older than me. She introduced me to the music of David Bowie, T-Rex, Frank Zappa and Led Zeppelin. She was always out seeing live bands in the late 1970s in Perth. Now she lives in Melbourne, not far away from me.

I experienced my first kiss at 10 and have been fascinated by women ever since. I would meet Kerry behind the tree and we’d kiss at play time.

I was a competitive swimmer at 15, but realised how boring it was to swim in a pool compared to performing in a theatre. Theatre was also a great way to meet girls. The women I met in that scene were strong, independent, self-assured, confident and intelligent.

I had my heart broken by my first girlfriend, Sally, when I was 16. She was older than me and went off to university while I was still at high school. She didn’t want to hang out with a high-school kid any more.

I have had a series of long-term relationships. In the mid-1980s I was living in Sydney and dating a girl from the country. Eventually she didn’t like the city any more and I was ambitious for my career. We remain friends.

The director said the kiss between me and Rebekah was going on for too long, but we didn’t realise it.

In the late ’80s I was in a glam-rock band, Melody Lords. The audience was predominantly women and I got lots of attention because of that.

I met my ex-wife, Rebekah Robertson, in the stage play Lady Windermere’s Fan in 1995. We were in period costume and the director said the kiss between us was going on for too long, but we didn’t realise it.

We have two children, Harry and Georgie. Georgie is an activist, actor and transgender rights advocate. She was the youngest Victorian to receive hormone blockers in Australia; in 2010, we began a six-year legal battle to allow this to take place.

Georgie told us she felt she was a girl ever since she was three. We wanted our child to be happy and that was the driving force through this journey. You would do anything to make sure your child is happy, and we were united on this as a family.

Georgie has taught me extraordinary things, such as to be true to yourself and to never give up. She is articulate, clear and confident and speaks her truth.

I am in a relationship and have a partner, but I don’t think I’d marry again. I don’t feel I need to.

Greg Stone is performing in Girl from the North Country at the Comedy Theatre Melbourne from April 29.