Chief Health Officer Brett Sutton is unsure if Victoria can achieve zero COVID-19 cases in the short term, despite Premier Daniel Andrews saying on the weekend the state was still aiming for “very low numbers”.

“We have to do what is feasible,” Professor Sutton said on Monday after the state reported 73 new coronavirus cases. It brought the number of Victorians with an active case to 805 as the state entered the 25th day of its sixth lockdown. 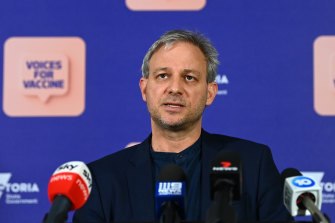 “We are not going to achieve the impossible if it becomes impossible,” Professor Sutton said.

On Sunday Mr Andrews said the state’s case numbers were too high to open up but that “we are still a chance to drive this down to very low numbers … No one has given up on that.”

NSW Premier Gladys Berejiklian last week said she accepted that “getting to zero across the nation … will be an impossible task”. On Monday, NSW reported 1290 new local COVID-19 cases – the highest number recorded in an Australian state in one day – and four new deaths, including an Aboriginal man from Dubbo believed to be Australia’s first Indigenous death.

Those deaths took Australian fatalities from COVID-19 past the 1000 mark.

Asked if his advice to the government would be that zero cases was still achievable in Victoria, Professor Sutton said the state would continue to pursue an “aggressive suppression strategy”.

Victoria would do its “utmost to keep those numbers down … to get to zero if you possibly can. But not with some absurd hope if numbers continue to increase despite everything that you’re doing.”

The discussion came as a northern suburbs council area emerged as both Melbourne’s least vaccinated area and one of those with the highest rates of active COVID-19 cases.

New vaccination figures released by the federal government on Sunday showed just 22 per cent of Hume’s residents were fully vaccinated – compared with 46 per cent in the wealthy municipality of Bayside, which covers suburbs including Brighton, Hampton, Black Rock and Sandringham. This was due in part to Hume having a much younger population than the rest of Melbourne – the federal government’s vaccine rollout has meant this group until recently has had little access to jabs.

Hume has 105 active coronavirus cases compared with Bayside’s one. The only Melbourne local government areas with more active cases are Wyndham (141 cases) and Hobsons Bay (133 cases).

Professor Sutton said on Monday that part of the state’s focus was on bringing down COVID-19 case numbers in Melbourne’s west and north.

“Most of the outbreak is under control but … in particular [in] Hobsons Bay, Wyndham and Hume local government areas, we do see continued mystery cases among those other linked cases that present a challenge for all of us.”

There were promising signs, Professor Sutton added, that while access to the Pfizer vaccine was increasing in Victoria, the AstraZeneca vaccine was proving more effective than had previously been understood.

“There are signs that the immunity that you get from AstraZeneca might even be more long-lasting than Pfizer, and that it will outperform Pfizer six months after getting vaccinated,” he said.