Between the increasingly precarious nature of the gig economy, the erosion of leisure time and the very real fear that robots will, one day, take our jobs, it's easy to feel unsettled about work.

If you've spent time pondering how you can use your education and the skills developed in your current role to transition into something else should desire or circumstance demand it, you're not alone. 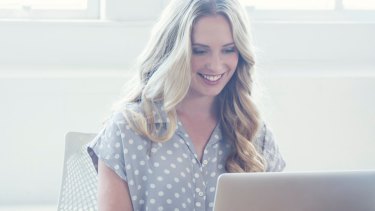 Being creative and adaptable are key to being future fit. Credit:Courtney Keating

This is in part why Andrea Clarke, who worked as a TV news and Washington DC correspondent before setting up her career development business CareerCEO, has written Future Fit.

The book expands on modern day leadership and techniques for overcoming a fear of change, but it's also a blueprint for being adaptable and above all, ways of honing human ability – i.e. the kind that can't be automated. Crucial when you consider that as Clarke notes, recent data predicts that up to 46 per cent of jobs will be lost to automation by 2030.

Clarke lists eight core competencies in her book and strategies for harnessing, including ways to nurture creativity, useful networking tips and building what she calls 'reputation capital.' That is, the ability to define your own personal brand, from your values to your digital footprint and the way you want to be perceived.

Personal branding is 'what we say we'll do, and what we do, combined. It's what people say about you when your're not in the room.'

Personal branding is, as Belinda Wall, founding director of marketing agency Brand Amplified puts it in the book, "what we say we'll do, and what we do, combined … it's what people say about you when you're not in the room." Which, you could argue, is similar to a rather old-fashioned but making a welcome comeback term, "character."

Ultimately Clarke believes that it is talent and not technology that is the future of work.

Below are five learnings

On staying relevant
Take responsibility for your own currency.

"I believe that the responsibility for finding, securing and delivering work is shifting to the individual in ways we have not seen before," says Clarke.

"[This] means that we need to invest in developing our own talent, as well as our ability to communicate that talent to our colleagues, clients and business community."

Creativity is your biggest asset and opportunity

"Creativity is the last competitive advantage and the most remarkable fact about this human skill in
the workplace is that 77 per cent of CEOs can’t find enough people with the ability to think creatively," says Clarke. This presents an opportunity, she says, for people to take risks and be vulnerable with their ideas.

"If you want to foster creativity, role model it yourself by being bold about sharing your ideas in meetings so you can send a signal that it’s OK to try something new."

Clarke is a woman who has taken risks – from flying over war zones to changing careers – and she thoroughly recommends them. Doing so, she says, is the only way to truly build confidence, whether it's speaking up in a boardroom meeting, taking a public speaking workshop or taking a new direction with your career.

"There is no doubt that women face obstacles to success that are deeply systemic. And on an
individual level, a lack of confidence is certainly the main factor that holds us back," says Clarke.

Clarke believes a new kind of worker is emerging, one who is adaptable, creative and always learning. This worker, says Clarke, is the future.

"[T]his is talent who are masters of the human skills. They know the value of their reputation capital across the marketplace, they’re super-communicators, they're creative, highly adaptable problem solvers."

There are no secrets with mentors

If you're lucky enough to have a great mentor, it's not about impressing them. Clarke says your mentor should be the one you turn to when you fail. Be honest and ask for no-hold's barred honesty in return.

"Mentors are everything. My only advice on this is: you should be able to tell your mentor the
good, the bad and the ugly. You should be able to call them and say, ‘hey I really stuffed this up
and I’m not sure how to recover, what's your advice?’ If you need to censor yourself with your
mentor, then I’d suggest that person might be a great sponsor or advisor instead," says Clarke.