University Challenge Birmingham team captain is branded ‘sexist’ by infuriated viewers for only appearing to confer with MALE teammates – but he denies it, saying ‘I do not discriminate’

The captain of Birmingham’s University Challenge team felt the sharp wrath of Twitter last night after many viewers tuning into the latest episode of the BBC2 quiz accused him of ‘ignoring’ his only female teammate.

US student Michael Joel Bartelle, from San Antonio in Texas, was heavily criticised as the show aired for appearing to frequently turn his back on his female teammate, Sajit, preferring to chat answers through with his male co-quizzers McPharlan and Robinson instead.

One viewer became so frustrated by Bartelle’s apparent dismissive attitude towards Sajit, who’s studying medicine, they claimed ‘I haven’t been able to look at the screen’.

Bartelle, who’s doing a PHD in Shakespeare Studies, has since defended his actions during the show, posting on Twitter: ‘I do not discriminate’.

Frustration: Viewers of the BBC2 quiz show criticised Birmingham’s captain, US student Michael Joel Bartelle, for frequently turning his back on his female teammate, Sajit, preferring to chat answers through with his male co-quizzers McPharlan and Robinson 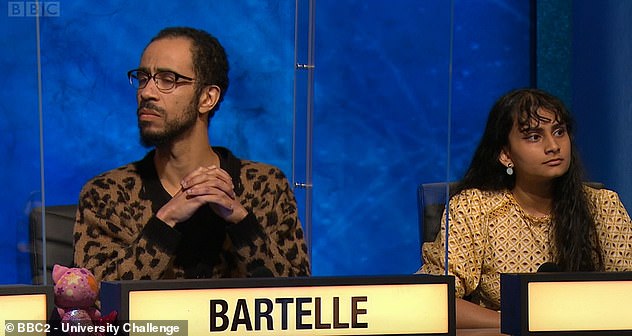 One viewer became so frustrated by Bartelle’s apparent dismissive attitude towards Sajit, they said they ‘haven’t been able to look at the screen’ 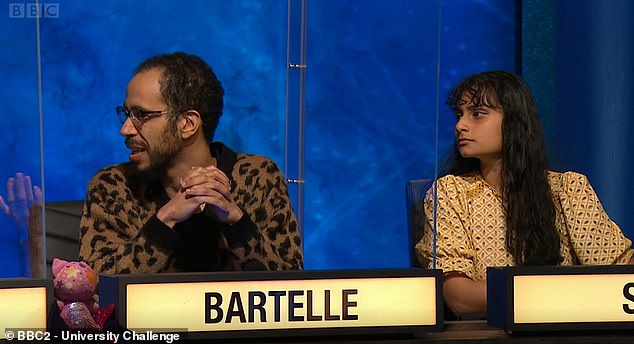 Bartelle, who’s doing a PHD in Shakespeare Studies, has since defended his actions during the show, posting on Twitter: ‘I do not discriminate’.

The performance of the captain, who was wearing an animal print woollen cardigan, left many viewers exasperated and taking to Twitter to air their opinions – but his friends also rushed to his defence.

Claiming Sajit was often ignored by her teammate, @BarbaraCastle45 wrote: ‘Talk about Birmingham cancel culture. APPALLING arrogance ignoring Sajit. Bartelle (especially) McParlan and Robinson and should be utterly ashamed of themselves.’

@AnnGregoryRN agreed, saying: ‘Yes, I haven’t been able to look at the screen; Bartelle so obviously and arrogantly ignored the female team member. #BBC2 please advise him.’

@SiobhraRush added: ‘I really wish Bartelle would stop ignoring the only girl on his team.’

@AnnGregoryRN penned: ‘Does Bartelle realise he has another team member on his left ? I’m feeling miffed he keeps ignoring her.’ 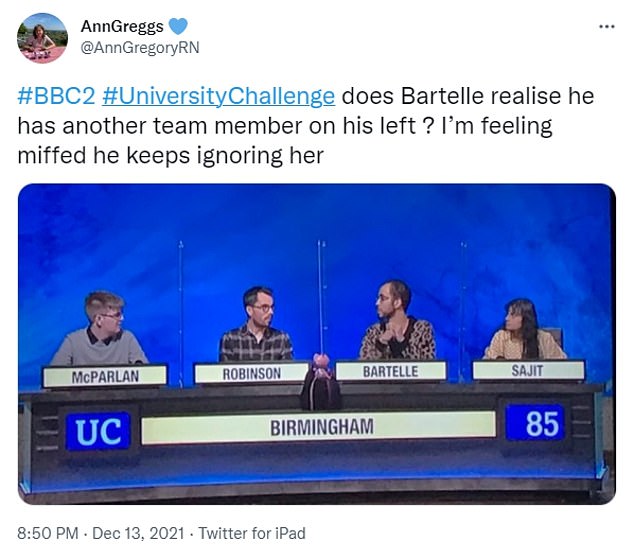 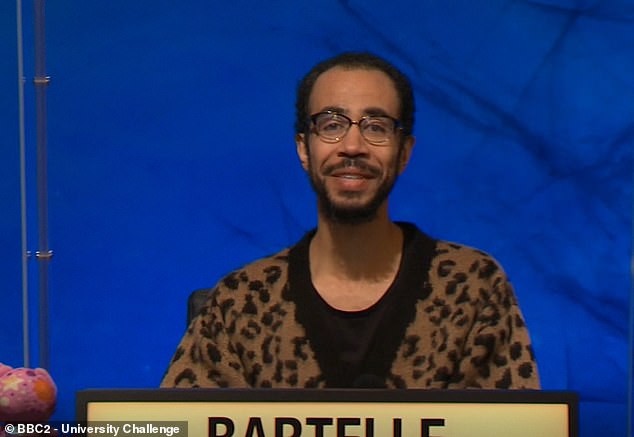 Denial: Bartelle told Twitter: ‘When conferring, I turn to any of my teammates if they offer an answer’

Defence: Bartelle responded to negative comments on Twitter, saying he was ‘proud’ of all of his teammates for helping secure a quarter final place

Birmingham easily won the match, 255 to 50 points against the Scottish University, but the episode was overshadowed by the debate that followed on Twitter.

Bartelle himself took to the social media platform to dismiss the accusations, saying: ‘Hey everyone. I do not discriminate. When conferring, I turn to any of my teammates if they offer an answer. I love them all and they are all amazing quizzers. Lots of love to all who’ve had warm comments for our team.’

Another fan of Bartelle’s said ‘I’m all for pointing out sexism, but this ain’t it chief’

He added: ‘I’m not really sure what I can say other than that I considered every single answer that was offered by all three of my teammates. They all contributed massively to our win and I’m proud of all of them.’

Friends also rallied to the quizzer’s defence. @reaffirmsfaith wrote: ‘Michael Bartelle is a delight and has been astoundingly supportive of my quizzing. I’m all for pointing out sexism, but this ain’t it chief #UniversityChallenge’

Former contestant on the show, James Devine-Stoneman, agreed, tweeting: ‘Just coming on here to say that Birmingham’s Bartelle is a great guy and the twitter jury need to f*** all the way off.’

He added: ‘Good lesson in how taking a selective screenshot plus the right narrative can make anyone look awful. Complete nonsense. I was accused of the same when I was on. Don’t pass judgement people you see on screen for half an hour.’

The academic competition is hotting up, with the quarter-finals the next step. Season favourites are also emerging amongst the show’s contestants, with Philosophy student Atyab Rashid, 22, from King’s College London one of the most popular – thanks to his silken voice.

His latest appearance, last week, saw his voice branded like ‘warm honey’ by one viewer. Another fan suggested that Rashid, who hails from from Daventry in Northamptonshire, has such impressive diction he ‘makes the Queen sound common’.