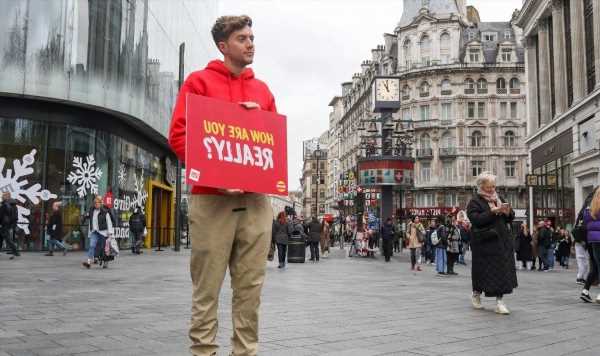 Roman Kemp asks people 'How are you really?'

But 51 percent believe others don’t want to hear about their troubles as it dampens the mood.

If respondents were asked by family how they are over Christmas dinner, 47 percent would keep the conversation light-hearted, believing that it is not the right time to discuss heavy issues.

But the study, commissioned by Walkers to shine a light on the benefits of opening up and talking more, found more than half (52 percent) feel additional pressure to be happy during the festive period, and pretend everything is okay.

Walkers and Comic Relief teamed up with TV and radio presenter, and mental wellbeing campaigner, Roman Kemp, to inspire people to open up and talk more – challenging the nation to give up the F*** word (fine) this Christmas and beyond, to support their mental wellbeing.

Roman said: “As someone who has been open about their own battle with mental health, and seen first-hand the devastating consequences of people bottling up their feelings, this is a campaign very close to my heart.

“Christmas is an amazing time of year, but it’s also a very challenging time for a lot of people.

“So, I’m hoping that through this campaign, and encouraging people to ban what is undoubtedly the most offensive “F” word out there, we can help open up the conversation surrounding mental wellbeing – and get people having open and honest conversations about how they’re really feeling.

“Most of the time, if a friend or family member is asking you how you are, they do genuinely want to know because they care.”

The study also found that, as a nation, we collectively proclaim we’re “fine” 213 million times every day, with the average person saying it four times during a 24-hour period.

But 87 percent confessed to saying they’re “fine” on autopilot when asked how they are, without even thinking about how they actually feel.

Money worries and the heavy current news agenda were cited as the things most likely things to get people down.

To kick off the campaign, Roman took to the streets of London to ask the public if they ever give honest answers when asked “how are you?”, and would join him in giving up the “F” word this Christmas.

Many of those interviewed admitted they, too, are guilty of providing autopilot “I’m fine” responses – with the reasons for doing so ranging from “not wanting to bring other people down with you”, “not knowing how people are going to deal with your emotions”, and “being afraid of feeling uncomfortable”.

Philippa Pennington, from Walkers, which has donated £2 million to Comic Relief for mental wellbeing projects, said: “We know Christmas can be a challenging time for many, and the pressure to appear positive and pretend everything is “fine”, even if it’s not, is particularly strong at this time of year.

“The message of our Christmas campaign – that it can help to open up and talk about your feelings – is so important, and we hope to be able to encourage people to talk a little more this festive season.”

The research, carried out via OnePoll, also revealed the top barrier to giving open and honest answers was that “it’s easier than explaining why you’re not fine” – along with not wanting to go into detail about how they’re feeling.

And one in four (26 percent) don’t think people genuinely want to know how you are when they ask this.

Despite this, almost half (48 percent) claimed they do genuinely want people to tell them how they’re feeling when they ask how they are.

Samir Patel, CEO of Comic Relief, said: “We believe humour can be great way to help start conversations that can sometimes be difficult to have, especially about how we are really feeling.

“So, this Christmas, together with Walkers, we hope we can help get the nation talking more, and looking after their mental wellbeing.”