Whatever kind of television takes your fancy, the free-to-air channels have you covered.

The Masked Singer
Ten, 7.30pm
Osher Gunsberg pops up yet again as host of this kooky singing show. But what the heck. Few people in Australia handle the hosting gig better. And in terms of pure weirdness, this isn't that far removed from Gunsberg's most recent gig, Bachelor in Paradise. Masked Singer is, however, decidedly more family friendly. Apart from the odd throwaway line that pushes the boundaries this is 100 per cent guaranteed G-rated. And I understand it's scientifically proven to be impossible to resist trying to guess who's behind the mask, regardless of your age. 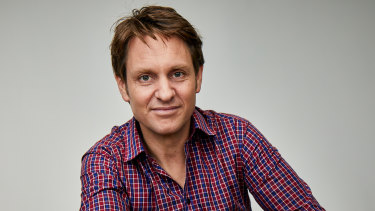 Craig Reucassel hosts The Fight for Planet A on ABC.

And while much of the science is broadly familiar, even those of us who consider ourselves pretty well briefed can learn something here (I did not know, for instance, that 10 per cent of Australia's carbon emissions comes from land clearing). There's real value in having familiar material hammered home in novel ways (regular farmers explaining the granular impact of changing weather patterns is particularly powerful). And in an episode that focuses on the ways in which agriculture contributes to the destruction of the planet it's uplifting to see examples of responsible farming and be left feeling that maybe we're not all going to die after all.

The Smoke
7Plus
This big-budget English drama about a team of London firefighters has lots of bells and whistles. The action scenes are amazing and the cast is great: Jamie Bamber stars as the troubled macho crew leader Kev, alongside Jodie Whittaker (his girlfriend) and Taron Egerton (the new kid on the crew). The drama itself is strictly B-grade, but entertaining in a sudsy Chicago Fire sort of way, and the whole thing has that British television gloss.

Shaun Micallef's Mad As Hell
ABC, 8.30pm
He's a man with a lot of plates spinning/fingers in pies/choose your own metaphor: scripted comedy, documentaries and (pre-COVID) live shows. But this absurd, tragicomic satire is Shaun Micallef's sweet spot, the vehicle that lets his talents really shine. That sharp legal brain seems to effortlessly spot all the ways in which the Emperor is, in fact, nude.

The slightly mad part of that brain frames his material in ways only Micallef could imagine. The word play is exquisite. And he's the opposite of a prima donna, relishing surrounding himself with mates – comedic and dramatic – and nurturing their talent. Kat Stewart was an early collaborator. This season Christie Whelan Brown joins the crew, and she's terrific.

Wok vs Pot with Marion And Silvia
SBS Food, 8pm
Two of the most charismatic TV cooks around right now team up for this delightful new series reminiscent of that classic, The Cook and the Chef. As the title suggests, in this iteration Italian expat Silvia Colloca and Thai/Aussie (and Masterchef favourite) Marion Grasby take an ingredient (say, rice) and each cook it in their own style. The warmth between the two women is evident, as is the genuine expertise of both. Both women manage to give us some great "who knew?" tips along with their recipes. And both definitely inspire us to have a crack at home. 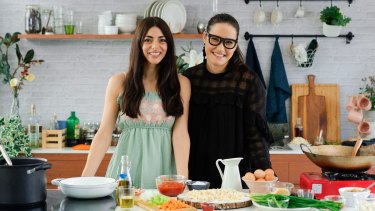 Silvia Colloca and Marion Grasby team up for Wok X Pot on SBS.Credit:SBS

James Cameron's History of Science Fiction
SBS Viceland, 8.30pm
Sometimes when a famous person's name is attached to a documentary their actual involvement is minimal. Not so here, where James Cameron regularly appears chatting with pals, including Steven Spielberg, George Lucas and Christopher Nolan. But this is much more than a bunch of middle-aged filmmakers patting each other on the back. It's a satisfyingly thorough investigation of one of those most underrated genres in fiction. As well as notable directors there's intelligent input from actors (Sigourney Weaver, Will Smith, Keanu Reeves); film technicians; film critics, commentators and academics; sci-fi novelists and actual scientists.

It's a rich brew that opens up an exploration of the way sci-fi works as a vehicle for not just imagining the future but examining the past and interrogating the present – as well as being wildly entertaining. The nuts and bolts of making great sci-fi also gets a run and there's some fun archival footage, including Ray Bradbury talking about how much he enjoyed Close Encounters of the Third Kind. (He saw it twice, and cried both times.)

Gogglebox (series return)
Ten, 8.40pm
It's the gift that keeps on giving. Not only have a whole lot of "OG" Goggleboxers gone on to greater things (or at least other Ten projects) the refreshed crew – along with old favourites – keep coming back, multiple times every year, to entertain and comfort us. Not to mention conveniently plugging the schedule for the networks, which in these COVID-blasted times is no small thing. For those of us locked up tight at home, there's not much else to do but watch telly (and watch other people watching telly). For those allowed out into the world, the other key purpose of Gogglebox has always been to keep you updated with all the latest shows – and what to think about them – without having to actually watch them yourself. 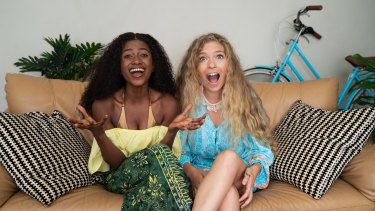 Motherland
ABC Comedy, 9.30pm
Comedies about how ghastly it is being a mother abound, and this is a middling entrant to the lists. Inevitably it often traverses familiar territory, thinly disguising its lack of insights with lots of fast talking and arm waving. On the upside Motherland has a cracking cast, headed by Anna Maxwell Martin and including the sublime Diane Morgan. And there's an equally impressive writing team, guaranteeing at least a few laughs, and a couple of sharp observations.

Greek Island Odyssey
SBS, 7.30pm
The third episode of historian Bettany Hughes' six-part voyage around the Greek islands sees her visiting Santorini, Naxos and Siphnos. She's retracing the journey of Odysseus, legendary king of Ithaca and hero of Homer's epic poem, The Odyssey, and she approaches the expedition with the upbeat manner of a primary school teacher who's excited about her subject.

On the volcanic Santorini, "an island that's had an explosive influence on the story of the world", she visits a disused boat-building shed. Then, as she explores "the Pompeii of Greece", she confides, "Now you're in for a bit of a treat because I think that this is one of the most inspiring places in the ancient world". Wine-loving Naxos, home of Dionysus, is "an island of pleasures and treasures", and she explores the rich history of Siphnos, with its gold and silver mines. Sunny, picturesque, garnished with tidbits about Greek gods.

Last Tango in Halifax
ABC, 8.20pm
Created and written by the estimable Sally Wainwright (Happy Valley), this beautifully nuanced story of the late-in-life romance between Alan (Derek Jacobi) and Celia (Anne Reid) has, over five impressive seasons, blossomed into a rich multi-generational study of family and relationships.

Australia Remastered (premiere)
ABC, 6pm
The ABC's globally acclaimed, late and lamented Natural History Unit is long gone. The national broadcaster, as it is currently configured, cannot support a department that's so costly to run. Making quality natural-history programs requires time, money, people and patience, all resources in short supply for Aunty. But in decades past, the unit produced some exceptional work and now a selection of 16mm and 35mm film footage has been digitally remastered to form the foundation of a new 15-part series. Presented by Aaron Pedersen, it's divided into three sections – Wild Australians, National Treasures and Oceans – and opens with Kangaroo Tales, which moves around the country, from the arid desert centre to snowy Tasmania, to trace the evolution of the marsupials. It's a fascinating study, graced by stunning imagery and perfectly programmed for Sunday night family viewing.