I’m RM-biased and I don’t care who knows it. The BTS leader for the iconic group always does an incredible job speaking on behalf of his bandmates. Their final Speak Yourself concert in the United States is just the latest example. The video of RM’s ending speech at BTS’ last U.S. Speak Yourself concert has stateside ARMYs swooning and soaking up his inspiring words. The show took place on Sunday, May 19, at New Jersey’s Metlife Stadium where the boys brought down the house, and RM wrapped up the show in a simple white T-shirt, black jeans.

J-Hope, Jimin, Jin, Jungkook, RM, Suga, and V popped over to the U.S. at the beginning of May and performed six shows over the course of three weekends. The Speak Yourself tour took them to Los Angeles, Chicago, and New Jersey, though fans hoped they would make a surprise appearance in New York City for the Met Gala, too. Alas, the objectively intense demands of touring kept the boys away from other big distractions like the gala so they could focus on what they do best: performing. It’s clear all members put their heart and soul into their shows and RM’s speech touched on their true motivations as performers: to transcend language barriers and unite everyone through music.

"You know how they say, the so-called American Dream… It’s a dream that, I don’t know, some say we’ve reached it, some say not," he began. "But, we’ve never dreamed it ’cause it was always considered, like, something that we could never dream of. It was impossible, but, the ARMY — they give it to us when they get together." 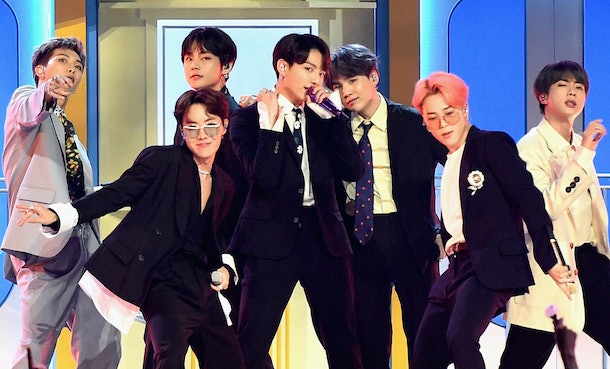 Check out his whole speech in this video shared by one lucky fan:

Based on BTS’ Speak Yourself tour schedule, the gang has a week or so of time "off" (besides their iHeartRadio concert on May 21) to process this leg of their travels before hitting their next location in Brazil followed by the UK and France. ARMYs will need to work double time on Twitter to make sure all moving moments and speeches are translated in the local languages so no one misses a damn thing!

I speak on behalf of the entire United States of America when I say it was an honor to see BTS perform here. Thank you, RM. For real.