The West Australian government’s dramatic exit from coal this week is the first major announcement that indicates the state is finally getting serious about the net-zero transition.

But will closing Collie’s coal be enough for WA to meet its emission reduction obligations? Not even close. Let me explain. 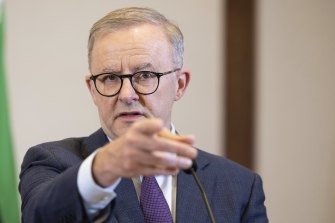 Prime Minister Albanese has made it clear he intends to legislate a 2030 emissions reduction target of 43 per cent from 2005 levels.

This new national target will have implications for each state and territory and require them all to reduce carbon emissions.

Most states and territories already have 2030 reduction targets:

The problem is that when you add up these commitments, Australia’s emissions reduce by only 35 per cent, well short of the 43 per cent that is soon to be legislated.

WA and the Northern Territory are noticeably absent from this list, both are still without a 2030 target, and both are the only jurisdictions where emissions are going up.

WA’s emissions are 21 per cent higher than 2005 levels. The NT’s emissions have increased by 46 per cent but from a far smaller base level.

For Albanese’s 43 per cent target to be met, the NT’s and especially WA’s emissions must be substantially reduced this decade. The only other solution is that the other states will need to do more than their fair share to enable Australia to meet its 43 per cent target.

How much would WA and NT emissions need to come down?

According to independent analysis, emission reduction levels for WA would need to sit around 32 per cent below 2005 levels. This 32 per cent target would also need to apply to the NT (and Queensland, whose current 30 per cent commitment is already close to that target.)

However (and this is where things get complicated), a 32 per cent reduction from 2005 emission levels for WA is far more than 32 per cent of current emissions. WA’s emissions have gone up over 21 per cent since 2005, and therefore, the state would need to reduce its emissions by approximately 48 per cent from current levels – or more than 40 million tonnes a year – to reach the 2030 target.

Let that sink in for a minute.

For WA to do the bare minimum of its fair share in meeting Labor’s proposed national target, it will have to almost halve its current emissions by the end of the decade – emissions that continue to rise year after year.

If WA doesn’t do this, other states – in particular NSW, Victoria, SA, and Tasmania – will have to work harder. At a time when WA is raking in record amounts of GST and revenue, is that argument likely to fly with the other states? I can’t see it. 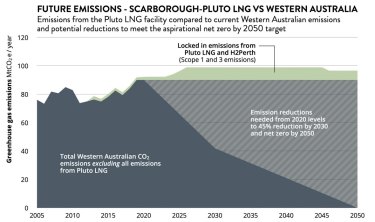 Emissions reductions needed in Western Australia from 2020 levels to meet a (hypothetical) 45% reduction target by 2030 and the state’s aspirational target of net zero by 2050.Credit:Climate Analytics

A further complication is that while the McGowan government is making limited efforts to reduce emissions, they are also doing plenty more to increase them – think of the approval of two major gas projects, Scarborough and the Browse Basin.

Swinging back to where we started, will WA’s phasing out of coal-fired power be enough to get WA on target? Here’s why not.

The WA government has said as a result of the coal phase-out: “Synergy’s carbon emissions will be reduced by 80 per cent by 2030”.

This means that their emissions will drop from 5 million tonnes to 1 million. While significant, this 4 million-tonne reduction makes up less than 10 per cent of the emissions reductions required for WA to do its fair share by 2030. WA still has 90 per cent to go.

In addition to retiring coal, this will mean far fewer new gas projects, more renewable energy and storage, and much more electrification of households and transport. Without a radical shift in WA, Albanese’s much-vaunted target will be almost impossible for him to reach.

For the Albanese government to meet its 43 per cent target, WA will have to get serious about climate action. Phasing out Collie coal is a good start but there’s plenty more WA will need to do.