The final battle of the Whisperer War is here.

“The Walking Dead” had to shut down production due to the coronavirus back in April, leaving the planned Season 10 finale in limbo as it hadn’t been completed. Nearly six months later, it’s finally here … and it was oh so satisfying.

The previous episode ended on one helluva cliffhanger, with Beta showing up outside the hospital where all the survivors were holed up — with an army of walkers and Whisperers at his back.

The hour began with Gabriel rallying the troops for war, as viewers got caught glimpses of a few other characters not at the hospital We saw Aaron and Alden fighting off some Whisperers in the woods before linking up with someone we’ll call “The Man In the Iron Mask,” one of Maggie’s buddies, for now. Speaking of Maggie, she returned after learning the fates of Jesus, Tara, Enid and everyone else killed by the Whisperers. Wow, has she been out of the loop!

There was also a quick look at Virgil returning to an abandoned Oceanside after parting ways with Michonne. He’d later come across Connie, who is thankfully alive after the cave collapse and will hopefully steer him in the direction of the other survivors.

Back to the meat of the episode.

Walking Dead: The World Beyond Stars Reveal Who They'd Kill to See Cross Over (Exclusive)

The survivors devised a plan to lure the walkers away from the hospital, Pied Piper style. First, a faction of them — including Carol, Daryl, Kelly, Jerry, Magna, Beatrice and Luke — covered themselves with guts to sneak out, as archers took out any Whisperers that Lydia could spot from a lookout point. The only casualty was Beatrice, who was ripped to shreds by a group of hungry walkers after a Whisperer slashed her ankle, causing her to scream. It was a nasty death, but the only one on the survivor side.

The rest of them then attached a stereo system to one of the horse-drawn carriages and lure the zombies away by blasting the Talking Heads’ “Burning Down the House.”

The wagon was eventually overrun by walkers after nightfall, but Lydia — who picked up a few tips from her mama — was able to steer them away by donning a skin mask. Meanwhile, the other survivors started picking off the Whisperers among the horde one by one.

The biggest moment of the episode came next, as Beta came face to face with a skin-wearing Negan and Daryl. While he delivered a beating to Negan and prepared to kill him, Daryl swooped in and stabbed him in both eyes with a pair of knives. Another brutal death, made all the more gross when Beta pulled the knives out of his skull before he died.

As his mask was ripped off to finally reveal actor Ryan Hurst’s face, a shocked Negan asked, “Shit, you know who that asshole is?” While Daryl replied, “Yeah, nobody,” it was just one final confirmation Hurst’s character was a famous rocker before becoming Alpha’s #2.

Lydia led the walkers to a nearby cliff and was prepared to walk off with them, before Carol stepped in and vowed to “finish it” herself. Since AMC already announced a spinoff starring both Carol and Daryl after “The Walking Dead” ends, any fear she was actually going to off herself went out the window. Lydia swooped in at the last second and pulled her behind a rock, while the zombies still went right off the ravine.

The Walking Dead to End In 2022, Spinoff Coming with Norman Reedus and Melissa McBride

Meanwhile, Maggie and her masked mystery man — seriously, what is his deal?! — linked up with the other survivors, Carol told Daryl she was no longer planning to leave them behind and Eugene’s group finally made it to the train yard to meet up with woman on the radio, Stephanie.

They were late and worried she had already left to wherever she calls home. They were kinda right, as she didn’t greet them. Instead, they were surrounded by heavily-armed, Stormtrooper-looking soldiers.

So, who are they? Well, anyone who doesn’t want comic book spoilers, stop reading this recap now. For those who don’t care, the armor on these guys is a perfect match to what the Commonwealth guards wear in the source material. The Commonwealth was introduced near the end of the comic’s run as a fully-developed, walled-off community where life appeared to run almost like it did before the outbreak. Like all communities on this show, however, it has a few dirty secrets of its own.

Expect to see that community and where Maggie’s been when the six additional episodes added to the Season 10 air in early 2021. Until then, both “The Walking Dead: World Beyond” — a two-season spin-off show — and “Fear the Walking Dead” will air new episodes every Sunday on AMC. 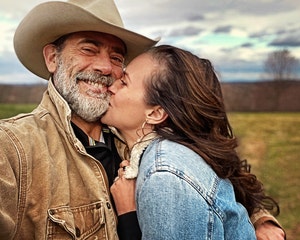