It's been 10 years since actor Jesse Eisenberg appeared on movie screens as Mark Zuckerberg in a dramatized version of Facebook's founding story in the movie "The Social Network." 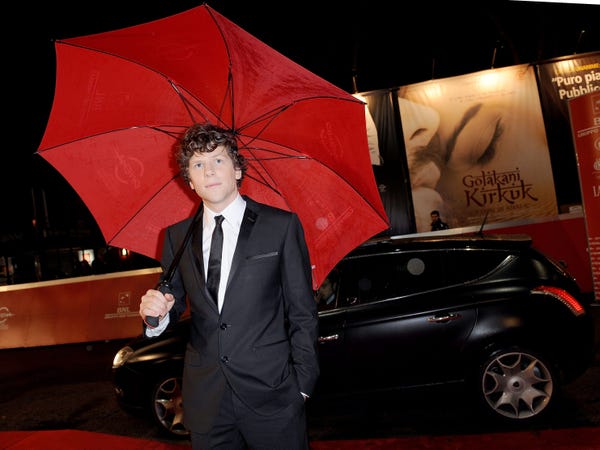 The two-hour-long David Fincher and Aaron Sorkin modern classic holds a 96% rating on Rotten Tomatoes and has raked in close to $100 million in US box office earnings.

"Mr. Fincher and Mr. Sorkin offer up a creation story for the digital age and something of a morality tale, one driven by desire, marked by triumph, tainted by betrayal and inspired by the new gospel: the geek shall inherit the earth," film critic Manohla Dargis wrote for The New York Times in 2010.

While the movie has entertained many over the last decade and earned more than a few fans, one person in particular has remained unimpressed — Mark Zuckerberg.

In a 2014 town hall with Facebook employees that was livestreamed to his page, Zuckerberg said he had "blocked" the movie out and that, in reality, his life was much less glamorous than the events depicted in the movie. 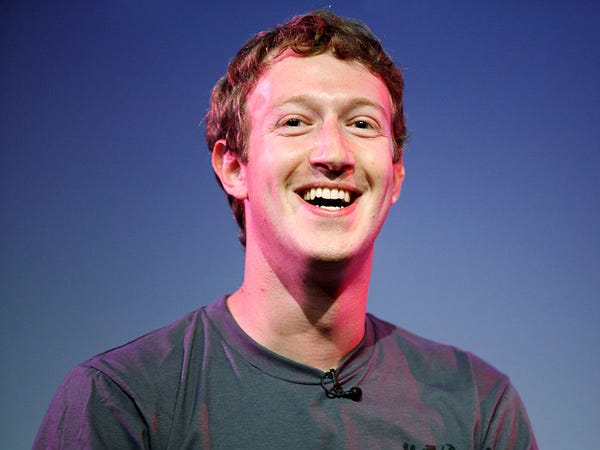 "The Social Network" mainly follows the journey of Zuckerberg, his Harvard best friend Eduardo Saverin, and Napster cofounder Sean Parker as they build the social media giant — first, in Harvard dorms in Cambridge, Massachusetts, and later from a house in Palo Alto, California. It goes from being "The Facebook" to, simply, Facebook. The movie is based on Ben Mezrich's 2009 book "The Accidental Billionaires."

When Brad Stone of the New York Times reached out to the publisher of the novel in 2009 about some inaccuracies, a publicist said, "this is not reportage. It is big, juicy fun."

The closing frame of the movie, an extreme close-up of Eisenberg's face, said Zuckerberg was the youngest billionaire in the world. In the decade since, he has become the fourth-richest person in the world overall, with an estimated net worth of $99.2 billion. 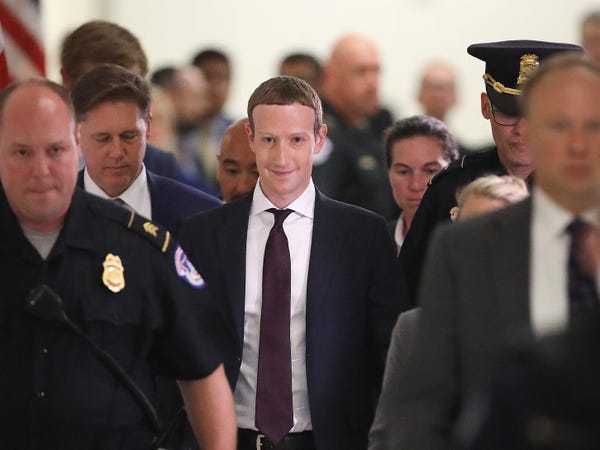 Bloomberg estimates that Zuckerberg is worth $99.2 billion and has gained $20.9 billion in wealth year to date.

A decade ago, the closing scene noted that Facebook had 500 million members in 207 countries and was valued at $25 billion.

As of the second quarter of 2020, Facebook has 2.7 billion monthly users, per Statista, and it's currently valued at $759.6 billion.

This massive growth over the last decade, for both Zuckerberg and the company, didn't come without hiccups and controversies, including instances of misuse of user data and the spread of fake news on the platform. 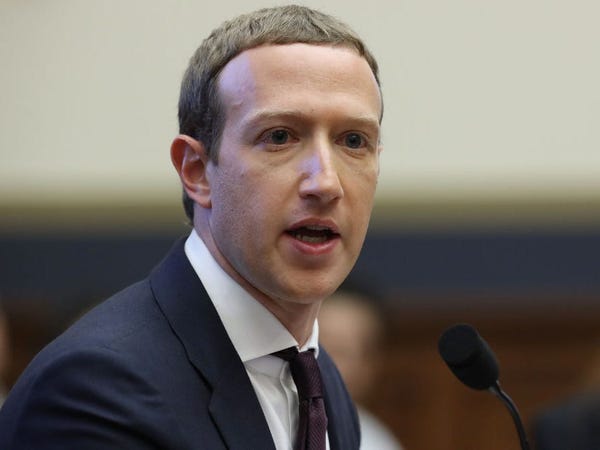 In 2018, Zuckerberg testified before Congress about news reports that political consulting firm Cambridge Analytica had misused user data to target voters ahead of the 2016 US presidential elections.

It was the largest penalty ever imposed on a company for violating consumers' privacy and almost 20 times greater than any previous privacy or data security penalty worldwide, per the FTC, as well as one of the largest penalties ever given out by the US government. The same month, Facebook reported $2.6 billion in net income for its most recent quarter, which would have been even higher without a $2 billion legal expense related to its settlement with the FTC.

Zuckerberg also went back to Harvard and got his degree, albeit an honorary one.

Mom, I always told you I'd come back and get my degree.

Mark Zuckerberg is married to Priscilla Chan, a pediatrician, and the two live in Palo Alto, California, with their daughters, Max and August. They also own properties in Lake Tahoe and Hawaii.

Eduardo Saverin, played by actor Andrew Garfield, is shown in the movie as the company's CFO in its early days before getting ousted by Zuckerberg and Sean Parker in a dramatic confrontation. 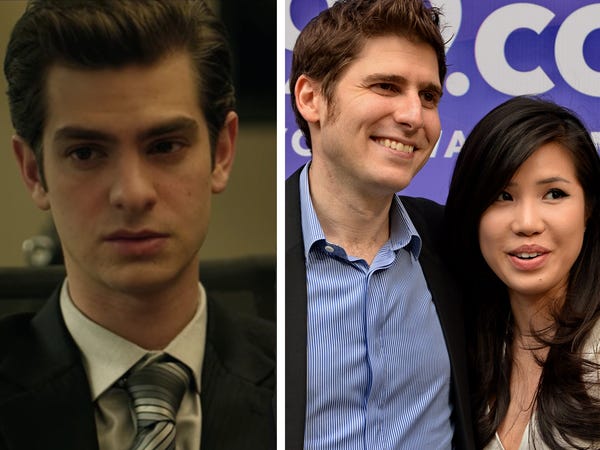 In 2010, Saverin wrote an op-ed for CNBC commenting on the film. "The movie was clearly intended to be entertainment and not a fact-based documentary," he said.

Two years later, he told Brazilian publication Veja: "Facebook wasn't built out of a Harvard dorm window. And I would never throw a laptop at someone like it appears in the movie. Not even at Mark."

Saverin, who was born in Brazil, gave up his US citizenship in 2012 ahead of Facebook going public, and currently lives in Singapore, where he is one of the richest people. 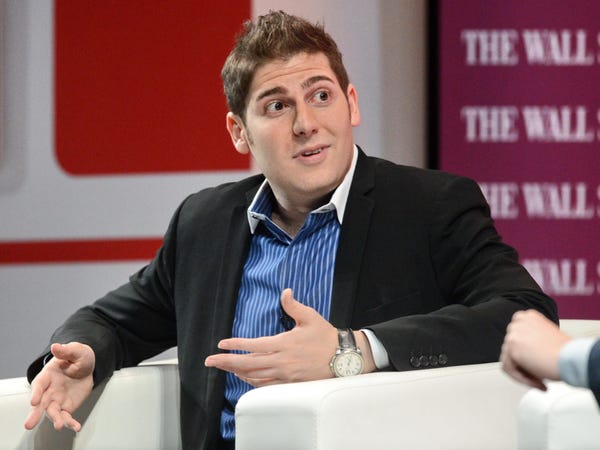 Saverin has an estimated net worth of $14.1 billion, per Forbes. He's now a venture capitalist but most of his wealth comes from his stake in Facebook.

He founded B Capital in 2016, a venture capital firm which invests in late-stage tech firms, according to Forbes.

He is one of the richest people in Singapore and is married to Elaine Andriejanssen, who works in finance. The couple has one child. 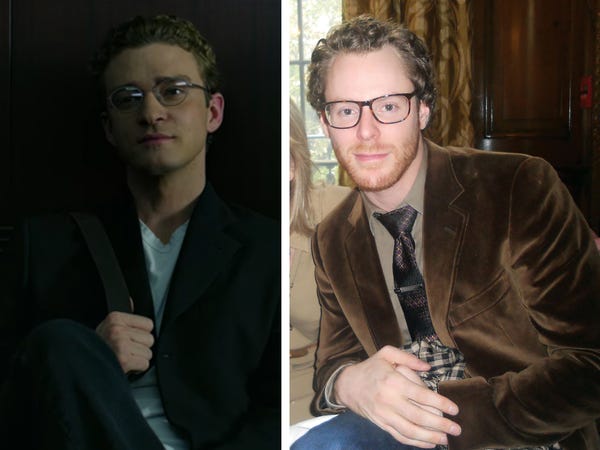 Parker cofounded music-focused file sharing software Napster as a teenager and was Facebook's founding president at 24.

Parker didn't appreciate his portrayal in the film. Specifically, he didn't enjoy a scene where Garfield, as Saverin, and Timberlake, as Parker, have a heated confrontation.

"I consider Eduardo a friend of mine, and I'm one of the few people at Facebook who still interacts with Eduardo," he said at an event in 2011. "This guy in the movie is a morally reprehensible human being."

As of October 2020, Parker was worth $2.7 billion, per Forbes. Most of his substantial wealth comes from his time at Facebook. 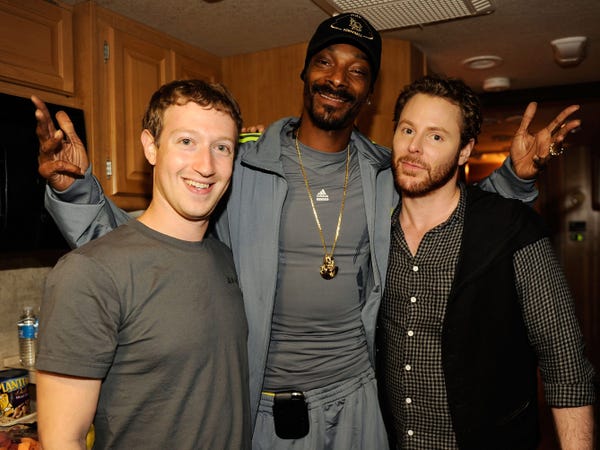 Parker has gone on to become a venture capitalist. He invested in music streaming app Spotify in 2010, his Forbes profile notes. "The Social Network" was released the same year.

Parker is also generous with his fortune and frequently donates money to various causes. In 2015, he spent $600 million to launch The Parker Foundation. Based in San Francisco, it focuses on the life sciences, public health, civic engagement, and the arts. He also founded the Parker Institute for Cancer Immunotherapy in 2016 and the Sean N. Parker Center for Allergy & Asthma Research in 2014.

Parker and his wife, Alexandra, have two children and are based in Los Angeles.

He was a supporter of Democratic VP nominee Kamala Harris' previous bids for attorney general, senate, and president. 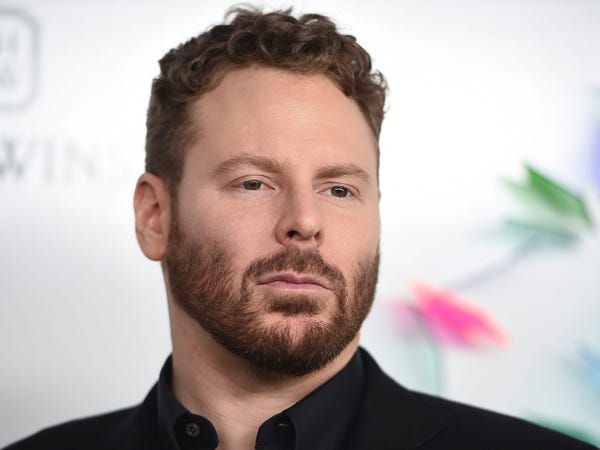 In 2017, he called it a "social-validation feedback loop."

"It literally changes your relationship with society, with each other. It probably interferes with productivity in weird ways. God only knows what it's doing to our children's brains," Parker said.

Actor Armie Hammer played both Tyler and Cameron Winklevoss, with the help of special effects and a body double. The identical twin brothers had a combined net worth of $1.45 billion in June 2019. 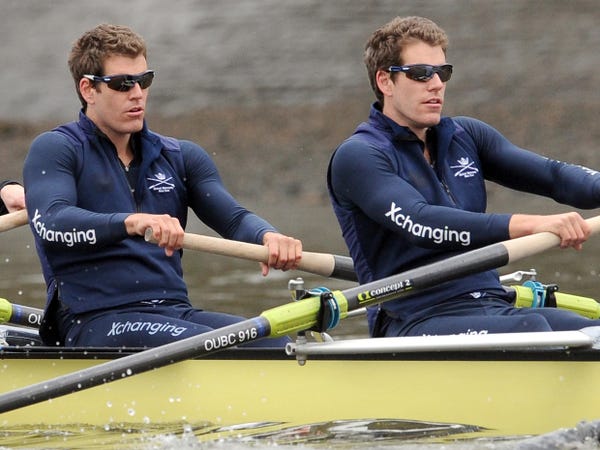 The Winklevoss twins sued Zuckerberg in 2004, stating that he stole the idea of Facebook from them; they eventually settled for $65 million.

They have since gone on to build an extensive fortune through trading in cryptocurrency. In 2015, Tyler and Cameron founded Gemini, a cryptocurrency exchange company. Tyler serves as the CEO. In June 2019, Bloomberg reported that the twins had a combined net worth of $1.45 billion after the price of bitcoin surged by 22% in one day.

According to reports in the Financial Times, the twins have had conversations with Facebook about cryptocurrency. 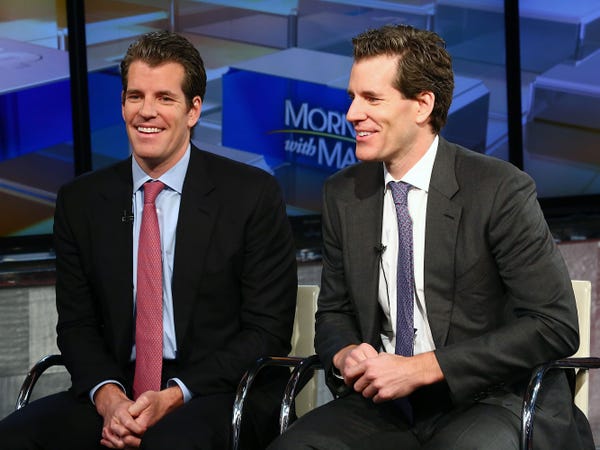 Hannah Murphy and Philip Stafford reported for the Financial Times in 2019 that "a secretive unit of the social media company" was working on developing a cryptocurrency that Facebook users can use beyond the social platform and had consulted with Gemini and Coinbase. A spokesperson for Facebook told CNBC that the reports were "speculative."

PayPal and Palantir cofounder Peter Thiel, played by Wallace Langham, was one of Facebook's earliest investors and makes a brief appearance in the movie. 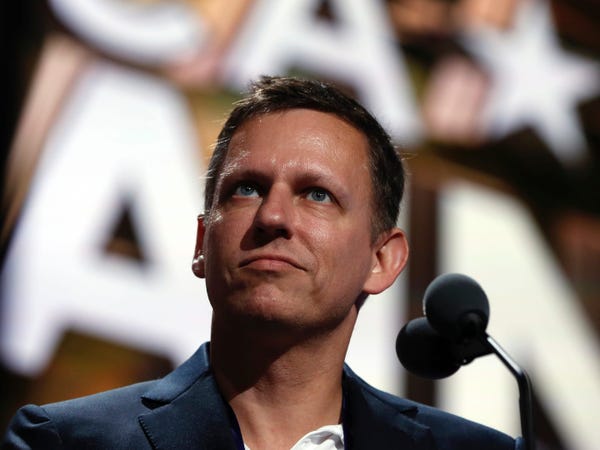 John Shinal reported for CNBC that Thiel invested half a million dollars in Facebook in 2004 and owned 2.5% of the company when it went public in 2012. He sold large chunks of his shares at various points in 2012, 2017, and 2020. His most recent sale left him with only about $2 million worth of shares in the company, per Bloomberg.

Thiel, a libertarian, supported President Trump in 2016 and spoke at the 2016 Republican National Convention.

The Wall Street Journal reported in December 2019 that Thiel was responsible for Facebook's controversial decision to accept political ads and not fact-check them. Thiel, The Journal reported, is said to have asked Zuckerberg "not to bow to public pressure." Twitter, on the other hand, has a far stricter policy for political ads. 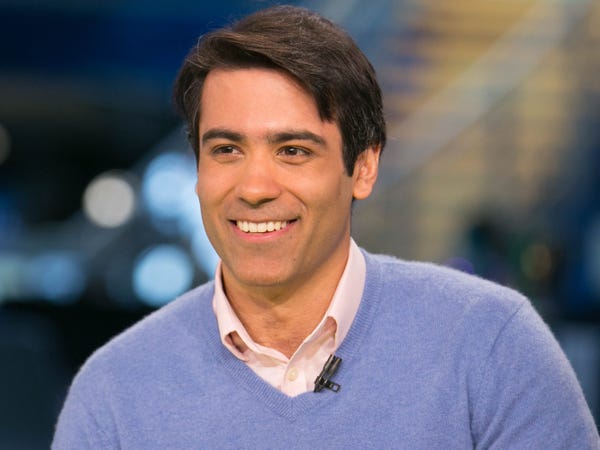 Narendra joined the suit against Mark Zuckerberg by Tyler and Cameron Winklevoss in 2004 before eventually settling.

Tyler and Cameron invested $1 million in SumZero in 2012.

According to his LinkedIn profile, after graduating from Harvard with a degree in applied mathematics, Narendra attended Northwestern University, where he got degrees in law and accounting and finance.

Dustin Moskovitz, who helped launched Facebook and is credited as one of its cofounders, left the company in 2008 and is currently worth $16.3 billion. 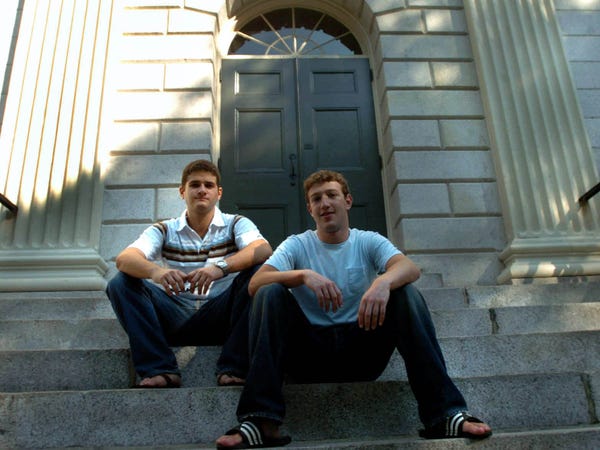 Forbes notes that most of Moskovitz's wealth comes from his 2% stake in Facebook.

Moskovitz cofounded office organizational platform Asana in 2008 and has been the CEO of the company since. Asana was worth $1.5 billion in November 2018 and reported revenue of $142.6 million in the 2020 fiscal year, per Forbes.

Asana went public on September 30, 2020, and as of October 2 has a market capitalization of $4 billion.

"It wasn't buzzy like a social network, or conceptually ambitious like rockets or artificial intelligence. But even hotshot space companies and disease-fighting nonprofits need to coordinate staff. Asana, which the avid yoga enthusiasts named for a Sanskrit word meaning alignment, could help them all," said Forbes' Alex Konrad about the app. Thiel, Parker, and Zuckerberg all invested seed money.

Chris Hughes, another cofounder, was estimated to be worth $430 million in 2016. He was also previously the publisher and editor in chief of The New Republic and more recently emerged as a vocal critic of Facebook. 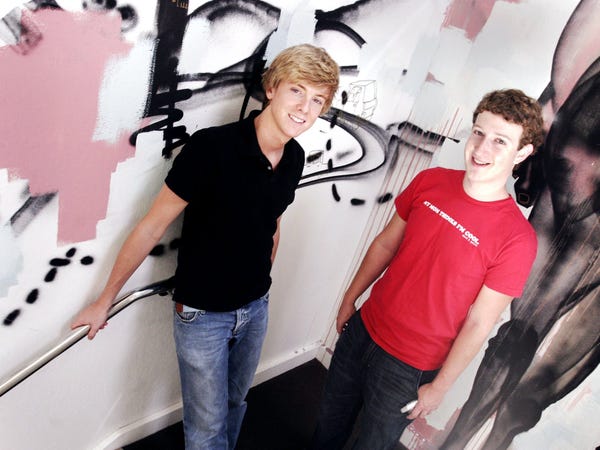 In 2012, Hughes took over the majority of The New Republic, per Forbes. He sold the publication in 2016. His time leading the magazine was marked by a decline in traffic and a wave of staff departures.

Also in 2012, Hughes married Sean Eldridge, the political director of Freedom to Marry, an organization dedicated to winning marriage for same-sex couples; Eldridge unsuccessfully ran for a seat in New York's 19th congressional district in 2014.

More recently, in May 2019, Hughes wrote an op-ed for The New York Times entitled "It's time to break up Facebook."

"Mark is a good, kind person. But I'm angry that his focus on growth led him to sacrifice security and civility for clicks. I'm disappointed in myself and the early Facebook team for not thinking more about how the News Feed algorithm could change our culture, influence elections and empower nationalist leaders. And I'm worried that Mark has surrounded himself with a team that reinforces his beliefs instead of challenging them," he said.