No news ma’am? The Queen attends Sunday church service in Windsor as Britain awaits Baby Sussex – and doctors say that overdue Meghan could be induced in hospital despite her hopes of a home birth

The Queen was pictured travelling from Windsor Castle to The Royal Chapel of All Saints in Windsor Great Park today.

The royal, 93, opted for a pretty pink ensemble, matching her blazer to her trademark hat which was adorned with a floral embellishment.

The Queen’s appearance came as fans eagerly await news of the birth of Duke and Duchess of Sussex’s firstborn.

According to reports it was always the Duchess of Sussex’s fervent wish to give birth naturally in the calm surroundings of her secluded Windsor home, Frogmore Cottage, pictured

But now a week overdue and with no sign of Baby Sussex’s arrival, the 37-year-old Duchess was last night facing the disappointing prospect of induced labour and a hospital birth.

Unless nature takes its course in the next 48 hours, it is now increasingly likely she will give birth at Frimley Park Hospital in Surrey, 15 miles from Frogmore Cottage. The Queen was pictured travelling from Windsor Castle to The Royal Chapel of All Saints in Windsor, Great Park today Harry and Meghan, 37, were due to welcome the much anticipated royal baby at the end of April or beginning of May, but there has been no word on whether the Duchess is in labour

The Queen looked serious  as she sat in the back seat of the car, appearing to travel without her seatbelt.

While often accompanied by the Duke of Edinburgh, 97, it seems that the Queen’s husband had remained at home as she was chauffeur-driven to the Sunday service.

Accessorising with pearl earrings, a necklace and red lipstick, the royal looked to be deep in thought.

The Queen’s appearance comes amid reports Meghan could be induced – which is typically offered seven to ten days after the due date, although it can be left as late as two weeks if mother and baby are ‘well and fit’. At that point, induction is imperative.

Once the Duchess has been induced – either physical manipulation or drugs to trigger contractions – there will be no chance of a home birth as that is against national guidelines, which also apply to private doctors and midwives. Unless nature takes its course in the next 48 hours, it is now increasingly likely she will give birth at Frimley Park Hospital in Surrey, pictured, 15 miles from Frogmore Cottage 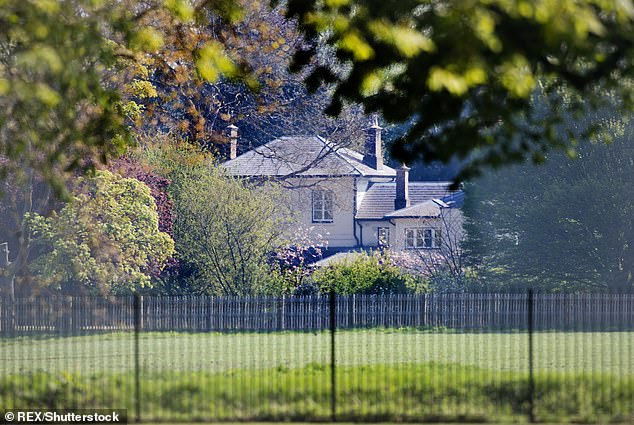 According to reports it was always the Duchess of Sussex’s fervent wish to give birth naturally in the calm surroundings of her secluded Windsor home, Frogmore Cottage, pictured

Last week, Prince Harry, 34, cancelled the first day of his official trip to Amsterdam due to start this Wednesday, citing ‘logistical planning’ reasons.

Harry and Meghan, 37, were due to welcome the much anticipated royal baby at the end of April or beginning of May, but there has been no word on the Duchess going into labour.

At Frogmore Cottage, the Duchess, who is with Prince Harry and her mother Doria, was said to be ‘comfortable and happy’ and ‘getting plenty of fresh air in the garden’.

Sources say a nurse visited the home in the past week and, as The Mail on Sunday revealed last month, a female-led delivery team is on standby. The royal, 93, opted for a pretty pink ensemble, matching her blazer to her trademark hat which was adorned with a floral embellishment

Royal fans spent another day yesterday waiting patiently for news, but none was forthcoming – leaving a vacuum for social media gossip to go into overdrive, with some even speculating the baby had already been born.

The Queen’s appearance comes after leading bookmakers have suspended betting on the birth date of the royal baby amid rumours Baby Sussex is already here.

Leading bookmakers Coral and Paddy Power have both halted betting on when the Duke and Duchess of Sussex’s baby will be born, as fans speculate that Meghan, 37, may have already given birth.

Paddy Power said in their announcement that ‘speculation has them convinced’ that ‘someone knows something’. Leading bookmakers Coral and Paddy Power have both halted betting on when the Duke and Duchess of Sussex’s baby will be born as fans speculate that Meghan, 37, may have already given birth. Meghan is seen at Buckingham Palace in March

Coral’s John Hill said: ‘The announcement of the birth of Meghan Markle and Prince Harry’s first child is expected any day now and if some speculation is correct, it may have already arrived therefore we have pulled the plug on our birth date betting.

‘We continue to see thousands of bets daily on the name of the child though, with Grace proving the most popular with punters and is the favourite ahead of Diana and Arthur.’

Meanwhile a Paddy Power spokesman said: ‘We’ve suspended betting on which day Harry and Meghan’s baby will arrive following a huge increase in wagers this evening which indicate to us that someone knows something – and perhaps the child is already born. Corals make Grace the 6-1 favourite in their baby name market which is still open, Diana is next best at 7-1, while Arthur and Elizabeth are both 8-1. Harry and Meghan are seen in London in March

‘That, combined with the rumours and speculation has us convinced that the royal arrival has already happened and if the betting is anything to go by, it’s almost certainly a baby girl.’

Palace sources have insisted Harry’s cancellation of the first day of his Amsterdam trip is unconnected with the birth, but the move will allow him more time with the baby should he or she be born in the meantime.

A spokesman for the Duke said: ‘Due to the logistical planning for the travelling press to cover visits and engagements by The Royal Family, we have taken the decision to postpone The Duke of Sussex’s scheduled visit to Amsterdam on Wednesday 8th May 2019.

‘The Duke is currently scheduled to travel to The Hague on Thursday 9th May for the launch of the Invictus Games The Hague 2020 as planned.’ 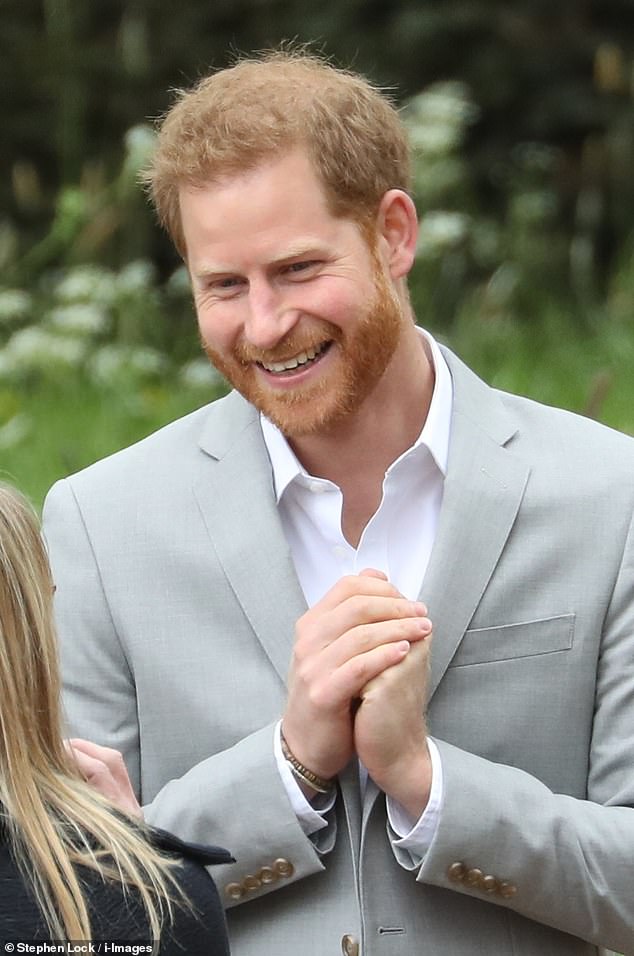 Last week, Prince Harry, 34, cancelled the first day of his official trip to Amsterdam due to start this Wednesday, citing ‘logistical planning’ reasons

Last week, Buckingham Palace confirmed to Entertainment Tonight Canada that the media would be informed when Meghan is in labour.

This comes following the announcement that Harry and Meghan would spend some time celebrating the new arrival before sharing details of their firstborn.

Last month they confirmed: ‘The Duke and Duchess of Sussex are very grateful for the goodwill they have received from people throughout the United Kingdom and around the world as they prepare to welcome their baby.’

‘Their Royal Highnesses have taken a personal decision to keep the plans around the arrival of their baby private. The Duke and Duchess look forward to sharing the exciting news with everyone once they have had an opportunity to celebrate privately as a new family.’

While the wait goes on for the arrival of the Duke and Duchess of Sussex’s baby, here are 10 facts about royal births:

The Queen – then Princess Elizabeth – was born by Caesarean section in 1926. But the surgery took place in her grandparents’ home in Mayfair, rather than in a hospital.

Lady Louise Windsor was the first of the Queen’s grandchildren to be born in an NHS hospital. She arrived prematurely following an emergency Caesarean after a seriously-ill eight months pregnant Countess of Wessex was rushed to Frimley Park Hospital in Surrey.

The Duchess of Cambridge had a natural birth with all three of her children at the exclusive Lindo Wing – and a team of 23 medical staff were on hand in case of emergencies.

The Duke of Edinburgh, then Prince Philip of Greece and Denmark, was born on the kitchen table at his family home Mon Repos in Corfu.

Prince Charles’s birth in 1948 was the first time in centuries that there was not a government minister there to witness the arrival of a future heir to the throne. It was an age-old custom designed to ensure that no substitute baby had been smuggled in in a warming pan or similar receptacle.

6. The shadow side of marriage

Queen Victoria – who had nine offspring – used to refer to childbearing as ‘the shadow side of marriage’ or ‘die Schattenseite’. Her first babies were born before anaesthetics were available.

Victoria used chloroform for later births, sniffing it from a handkerchief. When it was first pioneered, traditionalists opposed the drug, claiming labour pain was responsible for a woman’s love for her child, and sufferings during childbirth were a divine destiny. But Victoria refused to believe such a notion, and her support for the ‘blessed’ method and its ‘soothing, quieting and delightful beyond measure’ effect ensured its accepted use in society.

The Princess of Wales was induced with Prince William, with Diana telling friends her baby was ready and ‘well cooked’. Her labour was difficult and she was continually sick, with doctors considering a Caesarean. Future king William was eventually born without a C-section after the princess was given an epidural.

After William arrived at the Lindo Wing in 1982, new father the Prince of Wales asked the rapturous crowds outside the hospital if they could make a little less noise.

In 1984, Diana knew Prince Harry was going to be a boy following a scan. But she did not tell husband Charles, fearing he wanted a girl, and kept the news secret throughout her pregnancy.