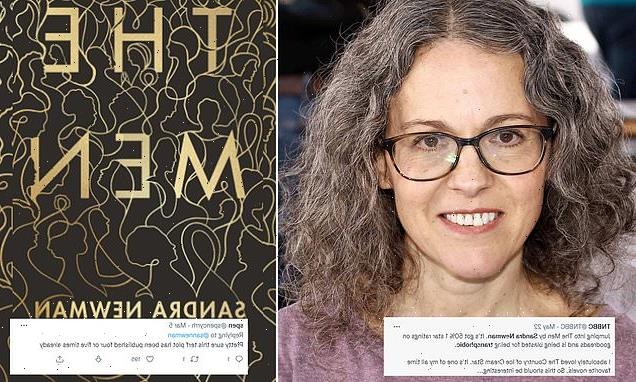 A little-known American author is releasing a book which imagines a world where people with Y chromosomes disappear – sparking a war with trans activists online.

Sandra Newman, who won critical acclaim for her own dystopian novel and is releasing a feminist version of Nineteen Eighty-Four next year, is set to release the The Men, which is about a post-male society, tomorrow.

Her publisher calls ‘The Men’ a ‘gripping, beautiful, and disquieting novel of feminist utopias and impossible sacrifices that interrogates the dream of a perfect society.’

Earlier this year, she described the book on Twitter and was quickly slammed by hoards of followers, with one writing: ‘Pretty sure this terf plot has been published four or five times already,’ using the term for ‘trans-exclusionary radical feminist.’ 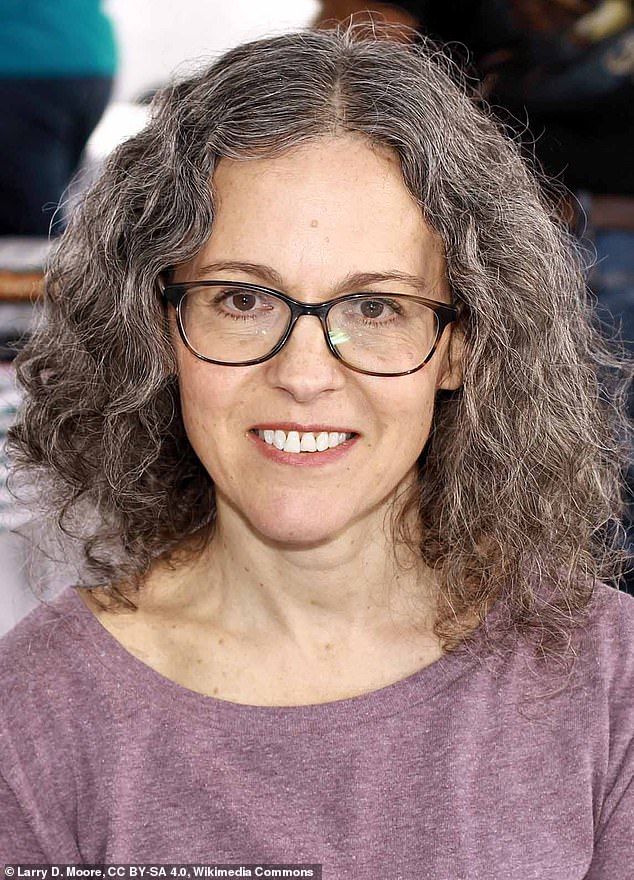 Sandra Newman, from New York, is releasing a book which imagines a world where people with Y chromosomes disappear – sparking a war with trans activists online

The book follows a mother whose husband and son both disappear in the crisis when every single human being born with a Y chromosome suddenly vanishes.

The author goes on to imagine a feminist utopia emerging – which is later threatened when online footage emerges of the vanished men marching through a barren landscape.

The videos become increasingly violent and appalling as the fathers start to kill their own children.

Speaking to The Guardian, the author revealed: ‘It was inspired by a genre of science fiction mostly written in the 1970s and 80s, most famously Joanna Russ’s The Female Man. 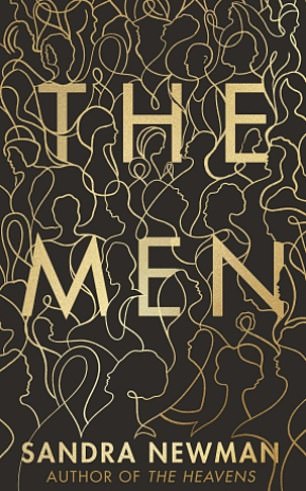 Her publisher calls ‘The Men’ a ‘gripping, beautiful, and disquieting novel of feminist utopias and impossible sacrifices that interrogates the dream of a perfect society’

‘These are novels where all the men died at some point in the distant past, which allows us to have a feminist utopia where women are completely free.

‘There’s no sexism, and none of the oppression and sexual violence that we have now.

‘But my novel is seen through the lens of our current obsession with apocalypse – so we actually see the moment the men disappear and the women deal with that as a reality.’

However the very premise of the book, which is released tomorrow, has been slated by critics online.

One Twitter user wrote: ‘Jumping into The Men by Sandra Newman.

‘It’s got 50% 1 star ratings on Goodreads and is being blasted for being transphobic.

‘I absolutely loved The Country of Ice Cream Star. It’s one of my all time favourite novels. So this should be interesting…’

A second commented: ‘It’s a given that that book “The Men” is transphobic. But even if it wasn’t bigoted at all, it’s terribly written. Even the sentences describing scenery are bad.

‘So don’t doubt yourself, if someone like Sandra Newman can’t write multiple books, anyone can.’

Meanwhile the GoodReads page for the novel was also flooded with negative reviews, with one penning: ‘Please can we stop with the transmisogyny and transphobia? I’m so tired of this.’

Another wrote: ‘Horrible. not only does the author not understand the fundamentals of genetics, but is using this ignorance as a shield for her blatant homophobia.’

WHAT IS THE Y CHROMOSOME AND WHY IS IT DISAPPEARING?

The Y chromosome is one of two sex chromosomes found in humans – the other is the X chromosome.

It is the only chromosome in an organism that isn’t essential for life – women survive just fine without one, after all.

In humans, the 22 other pairs of chromosomes – the autosomes – are identical.

The Y chromosome spans more than 59 million building blocks of DNA and represents almost 2 percent of the total DNA in cells.

But the human Y-chromosome is still one of the smallest in the genome.

It is carried by roughly half of a man’s sperm, and dictates whether a child will be male or female.

Despite this, it carries very little other important information.

And researchers think it is quickly disappearing.

If the same rate of degeneration continues, the Y chromosome has just 4.6 million years left before it disappears completely.

But the Y chromosome hasn’t always been so small.

It was once the size of the X chromosome and contained all the same genes.

The problem, however, is that Y chromosomes are only ever found as a single copy, passed from fathers to their sons, rather than a pair

This means that genes on the Y chromosome cannot undergo something known as ‘genetic recombination’.

This is switch of genes that takes place in each generation which helps to eliminate damaging gene mutations.

And critics have also slammed the book, with Jessa Crispin calling it ‘the most ill-conceived and badly executed novel of the year.’

Writing in The Times, she said: ‘[Sandra] doesn’t just trip over the stereotype of men bad/women good, she builds a house with it as her foundation.

‘She only makes it worse by trying to wokeify the text, sprinkling in mentions of trans and nonbinary people in the clumsiest way possible as if she remembered in the final draft that trans people existed and had to be accounted for in her scheme of damnation.’

In March, judges for a prominent LGBTQ literature award withdrew a planned nomination for Lauren Hough’s acclaimed essay collection, ‘Leaving Isn´t The Hardest Thing,’ after she used sharp and sometimes profane language on Twitter to defend the novel.

Hough was supposed to be a Lambda Award finalist for best lesbian memoir, one of 24 categories announced by the Lambda Literary organization. But her name did not appear.

In a letter sent to her publisher, Penguin Random House Lambda cited a series of tweetsthat showed a ‘troubling hostility toward transgender critics and trans-allies’ who had challenged the premise of Sandra Newman’s upcoming novel ‘The Men.’

The letter from Lambda to Penguin Random House refers to ‘at least a couple of documented instances’ when Hough used ‘her substantial platform – due in part to her excellent book – to harmfully engage with readers and critics alike.’

On Substack, Hough wrote recently that Newman had been an invaluable supporter while she was working on ‘Leaving Isn’t the Hardest Thing,’ her debut book, and that the two had discussed how Newman’s novel could ‘recognize the reality of transgender people.’

‘Other books that started from this premise – all the men disappear – have erased the existence of trans people, and it was important to her not to do that, to be as sensitive as possible,’ Hough wrote.

‘So when I saw people assuming that simple idea was the entirety of the plot, I told them to read the book before assuming the worst. For this, I was labeled a TERF.’ 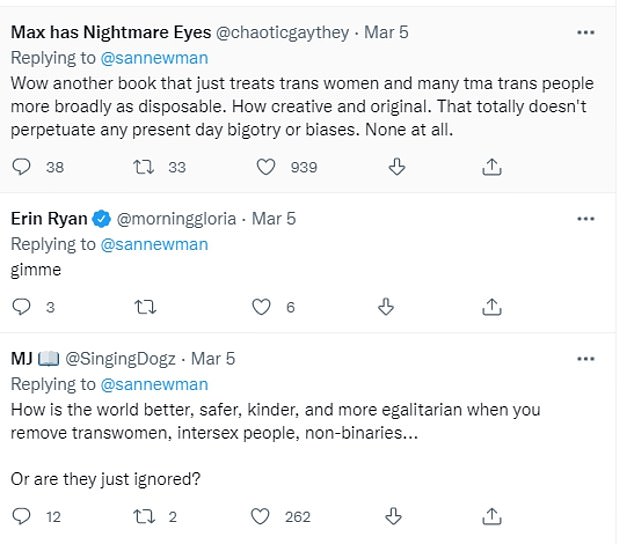 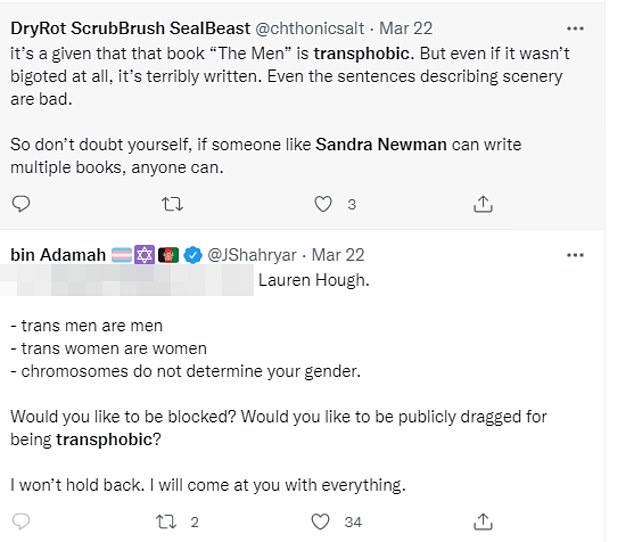