It began with faint ripples of anxious laughter and ended with a stillness so unnervingly intense that one person remarked in the foyer of Hobart’s State Cinema afterwards, “that was the most silent of all the silences I’ve ever experienced at the end of a film”.

The uncomfortable laughter was triggered by the real-life news footage of a blond-haired boy in a burns unit at a Hobart hospital. Asked whether he would play with firecrackers again, the boy smiles cheekily to the camera and says he will. The penetrating silence at the end of the film acknowledged the horror of what this boy would grow up to do.

The screening of Nitram, a film that charts the distressing trajectory that led to the 1996 mass shooting at Port Arthur, Tasmania, at the hands of a lone gunman, was never going to be easy here. Thirty-five people died and 23 were wounded that day, and many of the survivors continue to struggle in the aftermath. 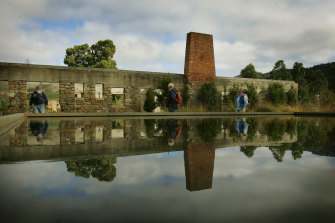 A reflective memorial pool behind the remains of the Port Arthur cafe.

Against the wishes of some survivors, Nitram opened in Tasmania on Thursday, at two cinemas only, the Star Theatre in Launceston and Hobart’s State Cinema, which is just several hundred metres from where the killer once lived with the reclusive Tattersall heiress who befriended him and left him her fortune. After the Hobart screening, people mingled solemnly in the foyer discussing the film. Some recalled the crime’s perpetrator frequenting the cafes near the cinema.

The filmmakers considered not showing the film in Tasmania at all. But after much deliberation, they decided that those who wanted to see the film and talk about the issues it raises – foremost about gun laws and the failings of the past – should have the opportunity to do so. 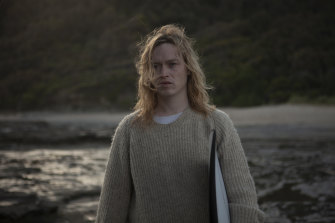 Caleb Landry Jones in a still from the film Nitram.

“I live here and I am deeply aware of how that event still carries very, very deep wounds, so I’ve been really nervous about it playing here, I’ll be honest,” director Justin Kurzel told this masthead. “But the theatres here felt as though there needed to be an opportunity for those who were interested in watching the film and having a conversation about the film, that they could. We’ve been incredibly careful that those that don’t [want to see the film], don’t have to have the film be visible around them, or forced on them.”

The State Cinema is not advertising the film through posters nor is it screening trailers of the film during other sessions. The cinema staff has been briefed on how to deal with people who may be adversely affected by seeing the film, and processes have been put in place to allow audience members to speak to the filmmakers directly about their concerns or questions.

But for some survivors of the massacre, this was not enough. The day before the film opened in Tasmania, some survivors anonymously penned an article in Hobart’s daily, The Mercury, detailing how the film’s screening would re-traumatise them. 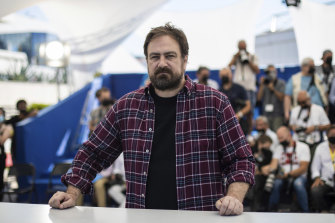 “Some of us survived merely because of the sacrifice of a loved one,” they wrote. “Others have required years of surgery for gunshot injuries. Most of us have needed psychological support. Post-traumatic stress disorder, anxiety and depression walk beside us. And the grief. The endless grief.”

I live here and I am deeply aware of how that event still carries very, very deep wounds, so I’ve been really nervous about it playing here.

The Alannah and Madeline Foundation, which was co-founded by Walter Mikac, who lost his two daughters and wife in the massacre, said out of “deep respect for the victims, survivors and first responders” the organisation would not participate in conversations about the film.

“We understand the importance of exploring difficult topics, but we also know the impact this film will have on many Australians,” the foundation said in a statement.

It’s no wonder, then, that some of those who attended Thursday night’s screening did so with a sense of unease.

“You feel like you’re not supposed to be here,” said one woman who asked not to be named. “I will probably keep it to myself that I have seen it.”

Despite this, the turn-out at the State Cinema at the 6pm session was surprisingly strong. About 100 people filled Cinema One – the venue’s biggest screen – and notably many of them were young, born after the massacre. This was cited as one of the very reasons for them attending the screening – they wanted to understand the gravity of that day and the gun reforms it ushered in.

Among them was Joel Halbe, a 22-year-old university student, who had come with a group of friends his age.

“It’s an insight into why it may have happened and how it happened, but it also profoundly shows how you can stop that thing happening again, obviously not to sympathise with someone who did this heinous act, but to be on the lookout, to be aware of social ills that may outcast people.” 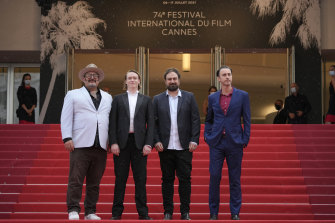 Nick Batzias, from left, Caleb Landry Jones, director Justin Kurzel and Shaun Grant pose for photographers upon arrival at the premiere of the film Nitram at Cannes.Credit:AP Photo

He acknowledged, though, that “it’s not a film that everyone could see.”

Another university student, Angelica Willis, 21, chose to see the film despite the controversy surrounding it because she too thought it important that history was not repeated.

“The fact is we feel safe, we’re not scared of that happening, a gunman coming in and killing everyone,” Willis said. “I’ve never had that fear at school, whereas in America, it happens all the time.”

She was concerned to learn, however, that there were more guns in private ownership now in Australia than there were in 1996. The film also provoked some confusing emotions.

“It’s hard for me to say I felt bad for the character knowing what he did, but l’m not going to lie and say that I didn’t feel bad, there were some moments of that.” 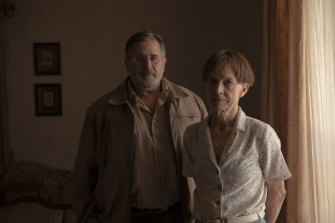 Anthony LaPaglia and Judy Davis as the shooter’s parents in Nitram.

Nitram’s writer Shaun Grant placed the shooter at the centre of the narrative, to show how easily a disturbed young man, a social outcast, could access guns. Grant felt this was the most powerful way to convey an anti-gun message.

But for a family member of a survivor of the massacre, this was the most problematic element of the film. The man, who did not wish to be named, said he wanted “to see more about what happened to people afterwards and how they dealt with it”.

The friends who came to support him during the screening were also uncertain about the film.

“At the end of it you go, what was this film? Is it an anti-gun film, if it was, then it’s not made clear until the very end,” one of the women in the group said. “This is one of the first films I have come out of and have no idea how I feel about it.”

Kurzel acknowledged that there were no easy answers.

“We’ve tried … with the utmost respect, and the utmost sensitivity, to start a conversation and a discussion about something that we feel really passionate about, which is gun reform, but also have a conversation about why and how this may have happened,” he said. “But it isn’t a film that gives clear answers, no.”

Nitram is in cinemas now. It will debut on Stan (owned by Nine, publisher of this masthead) on November 24.