In The Legend of Zelda: Breath of the Wild, Skull Lake in the Akkala Region marks the first place Link can find the mysterious Kilton and his Fang and Bone monster shop. While Hyrule has never been a stranger to weirder characters like Tingle or Oocca race from Twilight Princess, Kilton still stands out. Even years after Breath of the Wild released, fans asked about Kilton’s race. 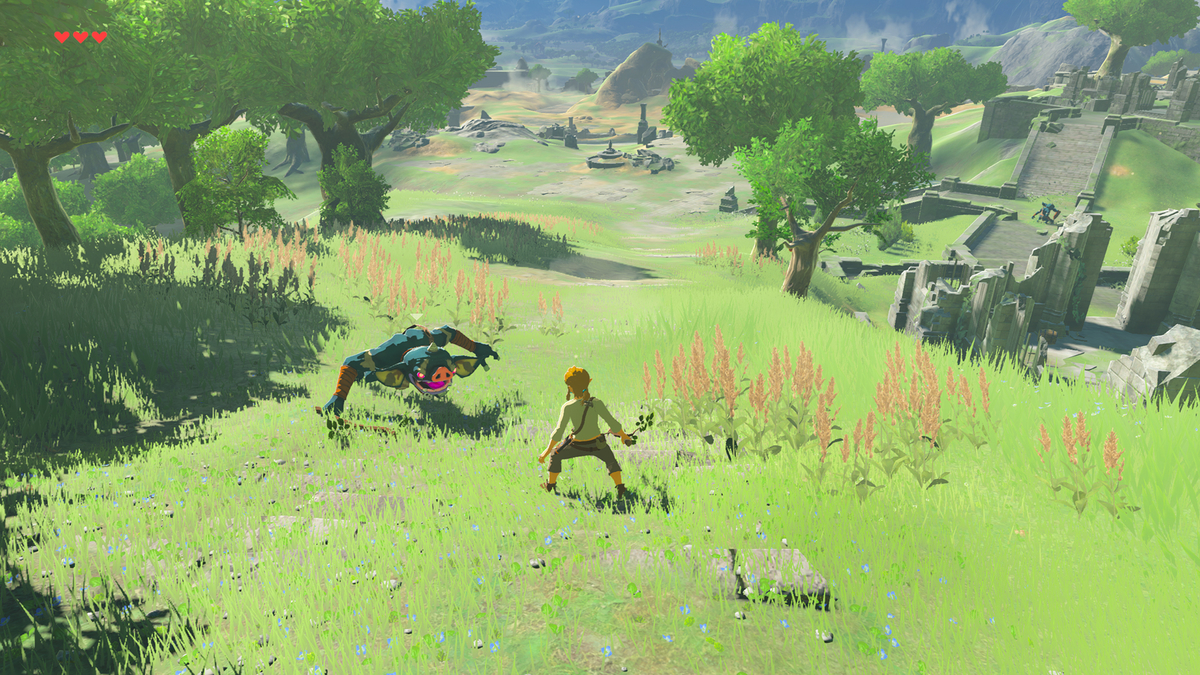 Does ‘The Legend of Zelda: Breath of the Wild’ Skull Lake’s Kilton look like any race in Hyrule?

Players can find Kilton to the northwest of Tarrey Town on the left ‘eye’ of Skull Lake. At first, he stands with his back to Link. Upon turning around, players got a good look at him, which brought up more questions.

While the Breath of the Wild‘s Skull Lake merchant Kilton does not fully resemble any one race in The Legend of Zelda series, we can rule out a few.

Kilton stands a few inches shorter than Link, but most of this height comes from his massive, egg-shaped head. He has ash-gray skin with white tufts of hair, body painting, and piercings.

Kilton does not belong to the Gerudo, Goron, Zora, or Rito Tribes. The Gerudo have a gene that makes their gender female at birth. Gorons tend to all have the same golden orange skin with a rocky shell. The Zora resemble fish-like humanoids. Then the Rito Tribe is covered in feathers with beaks.

Fans narrowed their theories down to three possible races for Kilton: the common Hylians, a human, or even a monster or demon.

While humans have appeared in games like The Legend of Zelda: Twilight Princess and Link’s Awakening, no humans appear in Breath of the Wild.

According to some fans, Breath of the Wild’s Kilton is actually just a strange-looking Hylian. He has pointed ears just like Link. However, multiple races in the Zelda series, like the Gerudo.

Another theory suggested that Kilton could have human roots. While humans do not appear frequently in The Legend of Zelda, Twilight Princess and Link’s Awakening features several human characters with round ears. However, as stated before, Kilton has pointed ears.

The third theory about what race the Breath of the Wild Skull Lake dweller Kilton could belong to remains the most interesting as it links the collector to Ganondorf.

Some ‘Breath of the Wild’ fans think Kilton could be a monster or demon, like Ganondorf

While Kilton could belong to the Hylian race, some think his love for monsters goes deeper than adoration. Some Breath of the Wild fans think Kilton is a monster or demon himself.

Ganondorf traditionally comes from the Gerudo Desert. However, he has been depicted with a more ashen skin tone to emphasize his Demon King nature.

Kilton stands out against the rest of the Breath of the Wild cast because of his ash-gray skin.

Then his passion for monsters and monster parts makes more sense. The forces of evil in The Legend of Zelda series has always used monsters and sought to make them more powerful.

However, Nintendo will likely not reveal what race Kilton is directly. Afterall, they thrive at tell stories between the lines, like some of the Zelda Timeline stories.