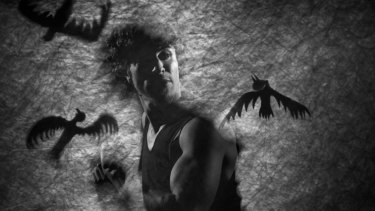 Jack Sheppard brings authenticity and craft to his performance.

YIRRAMBOI FESTIVAL
The Honouring ★★★½
La Mama Courthouse, until May 12

Part of the YIRRAMBOI First Nations Festival, Jack Sheppard’s The Honouring transforms the experience of trauma into raw and deeply moving dramatic art.

This solo work of dance theatre springs from appalling grief – from the helplessness, tormenting questions and sheer despair this young artist felt at losing several friends to suicide.

Wrenched from bleak, confronting material, its unflinching gaze and emotional intelligence transfigure a painful inspiration into a unique and cathartic ritual that gets the dead and the living where they need to go.

Jack Sheppard transforms the experience of trauma into raw and deeply moving dramatic art that's crying out for life in a larger venue.

In Indigenous Australian cultures, the dead should return to the Dreaming from which all things were created. The Honouring imagines suicide as a disruptive force in that spiritual progress, as well as an anguish to those left behind.

Combining puppetry, shadow play, choreography and text, the piece begins with a disturbing pas de deux between past and present, where Sheppard composes an agonised, violently gestural form of kinetic poetry from a fusion of contemporary and ancient dance styles.

A spasmodic choreography embodies extremes of anxiety and horror, before the corpse of a hanged man (an eerie puppet in a hoodie) is winched down from on high.

Sheppard then dances with the body of his dead friend, lies supine underneath him, mourns and eulogises, before an unnerving electronic soundtrack bears the dancer into the surreal nightmare of an internal world, haunted by shadows.

The weight of First Nations history insinuates itself into his personal grief with crushing impact. The dance evokes a dreamscape tainted by shades of colonial violence and oppression, by Aboriginal deaths in custody and by dislocation and dispossession that find gruesome embodiment in dance sequences – such as one where totem animals are pulverised into roadkill.

Beauty, resilience and healing are all hard-won, reclaimed from an abyss of suffering, as the piece works towards a sort of memorial that’s more powerful for being understated, improvised and provisional.

The script is the weakest link, and would be stronger if condensed into something fragmentary and poetic, with the aim of reducing superfluity between word and body. Why say "darkness", for instance, when it is conjured so affectingly through movement? Why say "signifier", when "sign" will do?

But it’s the only weakness in a work that's crying out for another life in a larger venue. The authenticity and craft Sheppard brings to the portrayal of grave distress lend The Honouring a transcendent quality, one that reconciles past and present, and looks to tomorrow with washed eyes.