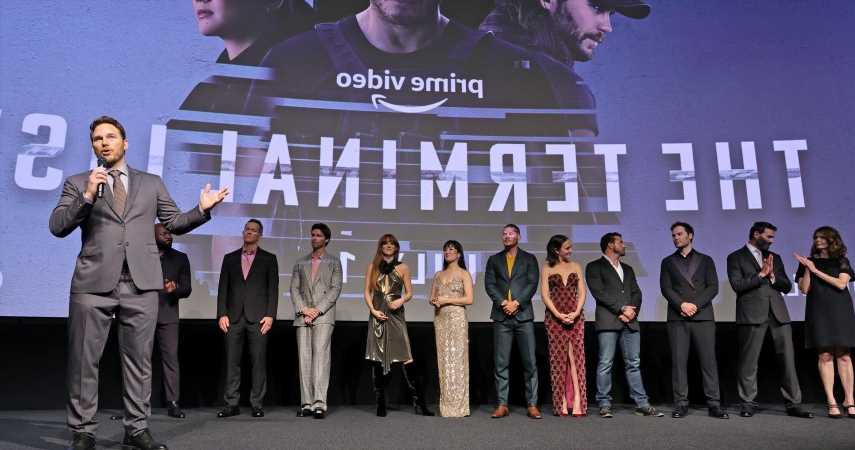 2022 has been an interesting year for movie lovers as movie producers and directors have continued to churn out blockbusters, much to their delight. One such movie to have graced the year is Amazon Studios-distributed American action television series, The Terminal List. Released on Amazon Prime Video on the first of July 2022, the movie series plot, whose story is based on the 2018 novel of the same name, sees an aggrieved Navy SEAL officer seeking to avenge the unjust murder of his family. The eight-episode action series features top Hollywood acts like Chris Pratt, Constance Wu, Taylor Kitsch, and Riley Keough amongst others. In this article, we will let you in on the net worth of the cast of the award-winning action series.

In a recurring role in “The Terminal List”, LaMonica Garrett starred as Bill Cox, the Commander of the SEAL Team 7. The 47-year-old retired professional Slam ball player transitioned fully into acting in 2011, starring as Deputy Sheriff Cane in the American action crime Tv Series, “Sons of Anarchy”. Since then, he has acted in select movies, TV series, and voice video games like Need for Speed. Today, his net worth is around $1.5 million.

The Guatemalan actor, best known for his roles in the Netflix Series, Narcos, plays the role of Jordan Groff, a news editor who worked directly with Katie (Constance Wu) in the action TV series. The 39-year-old, despite featuring in mostly short films and fringe roles in TV series, remains one of Hollywood’s fast-rising acts. He is also a successful model and TV Host. Today, Arturo is reportedly worth $1.5 million.

RELATED: The 10 Most Expensive Motorcycles In The World

Born in Sydney, Jai Courtney is an Australian actor who played the role of Steve Horn, a businessman and CEO in the action thriller series. Before his breakout role as “Charlie” in the commercially successful action film, Jack Reacher which was released in 2012, Jai mostly played fringe roles in movies and TV series. However, since then, the 36-year-old actor has gone on to play many important roles in movies, cementing his name in Hollywood. Today, Jai is estimated to be worth $3 million.

Stephen Bishop is a retired Baseball player and actor who played the role of Richard Fontana, a U.S. Department of Defense official in the action thriller series. Since his acting debut in 2003, the 51-year-old has remained a prominent face in Hollywood, starring in multiple award-winning movies, TV series, and TV shows. Today, Stephen is not only a successful baseball player but also a successful actor with earnings reportedly around $3 million.

Born Danielle Riley Keough, the 33-year-old is the granddaughter of Rock’n’roll legend Elvis Presley and the daughter of his only child, Lisa Marie Presley. In “The Terminal List”, she played the role of Lauren Reece, the wife of the protagonist, James Reece. Apart from being an actress, she is also a singer and a model and has appeared at fashion shows for global brands like Christian Dior and Dolce & Gabbana. The philanthropist and activist is estimated to be worth around $5 million.

Born in Santa Monica, California, Patrick is the son of American-Austrian actor, film producer, and politician, Arnold Schwarzenegger. In “The Terminal List”, he played the role of Donald Mitchell, a Special Warfare Operator in the Second Class of the Alpha Platoon. Apart from being an actor, the 29-year-old University of Southern California alumna is also a model, businessman, investor, and entrepreneur. Today, the brain wellness company, MOSH co-founder is reportedly worth $6 million.

Starring as Katie Buranek, a seasoned war correspondent, Constance Wu showcases her versatility in the action TV series. Since 2005 when she debuted in the ABC television comedy, Fresh Off the Boat, only a few can boast of the successes of the 40-year-old American actress. In 2017, she was named in Time’s 100 most influential people in the world for her activism and illustrious philanthropy works. Today, the multiple award-winning actress and golden globe nominee is estimated to be worth $6 million.

RELATED: Gifting Millions: The 10 Most Expensive Gifts Ever Given In The World

The 41-year-old Canadian actor and model played Ben Edward in the TV series, a CIA Ground Branch operative. Taylor remains one of Hollywood’s finest acts, best known for playing Tim Riggins in NBC’s Friday Night Lights from 2006 to 2011. In a career that has lasted more than 16 years, Taylor has featured in over 30 movies and TV Series, including box office successes like X-Men Origins (Wolverine), Kyle XY, and American Assassin. Today, the People’s Choice Award nominee is worth $10 million.

Born Christopher Michael Pratt in Virginia, Minnesota, “Chris Pratt” as popularly called by many, featured as James Reece, a U.S. Navy SEAL and the protagonist in the TV series. The 43-year-old actor rose to prominence in Hollywood in 2009 after playing “Andy Dwyer” in the NBC-produced sitcom, Parks and Recreation. A role that lasted until 2015. He went ahead to feature in more than 50 movies and TV Series while also using his voice for video games like Ben 10 and Lego Jurassic World. Today, Chris’s earnings from movies and brand endorsements is reportedly $80 million.