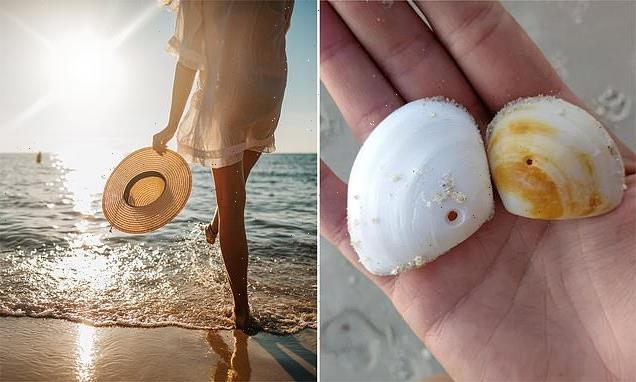 The REAL reason some beach shells have a tiny perfect hole through the centre: ‘This is disturbing’

A beachgoer has queried why some shells he finds on the shore have tiny holes seemingly ‘drilled’ into them – and the truth behind the interesting feature is horrifying.

The Adelaide man was on Henley Beach when he found two shells with perfect circles on top of them, the exact size one might need to put a string through them and craft a necklace.

‘What’s making these perfect circles in these shells?’ He questioned on Reddit, sharing a picture alongside.

Those in the comment section of the Reddit thread agreed that they had seen them before and often wondered how it was possible to make the hole without the rest of the shell cracking. 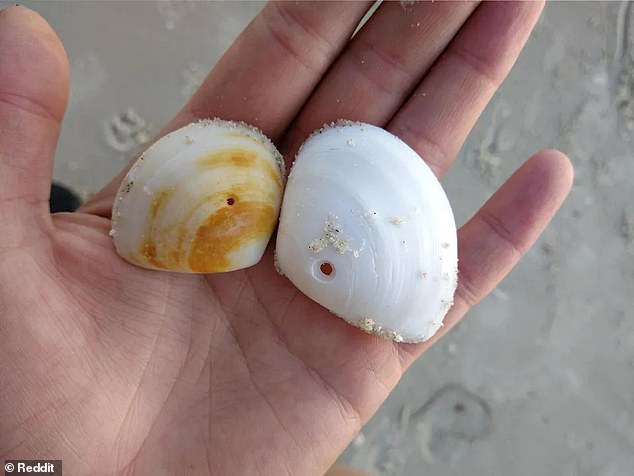 The Adelaide man was on Henley Beach when he found two shells with perfect circles on top of them, the exact size one might need to put a string through them and craft a necklace

‘I hope someone can answer this, my kids asked me the other day and I was like…,’ one person wrote.

Professor Culum Brown, from the School of Natural Sciences at Macquarie University, told Yahoo that the circles were pretty common and were made by an animal.

‘There are actually loads of predatory snails out there, like moon snails, that use their radula – their chainsaw-like tongue – to drill through the shells of bivalves and suck out the gooey insides,’ he said.

Within the bivalve family there are clams, oysters, cockles, mussels and scallops.

‘You’ll find heaps of these shells along the beach with these perfect drill holes in them,’ he continued.

‘There is no way into a bivalve when it’s closed, so these guys just go through it.’

As a result their tongue is razor sharp in order to cut through the shells and retrieve the flesh inside.

Often these moon snails mistaken regular shells for bivalves, hence why there are plenty of circles in already opened shells laying on the sand.

Moon snails are voracious predators on the clams that share their habitat, the Slater Museum of Natural History concurs on its website.

They find a clam, presumably by chemoreception, and envelope it in their big foot and often drag it more deeply into the sand. 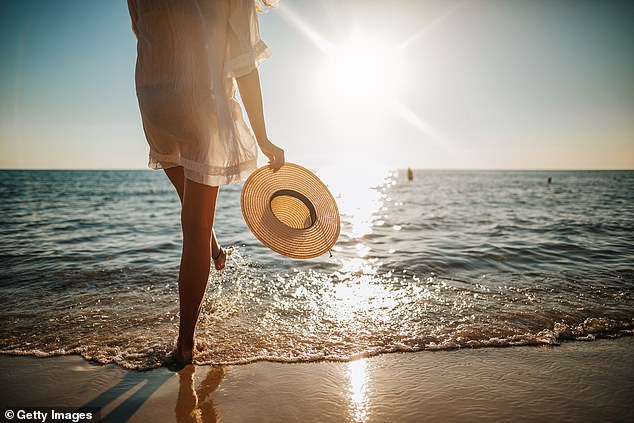 The radula – their tongue – has seven rows of teeth with which they use to dig a hole into the clam shell. A gland secretes enzymes and even hydrochloric acid to help accomplish this.

The snail then rasps and sucks out the clam’s tissues over a period of a day or so.

Most individuals following the Reddit thread were surprised to learn of the carnivorous sea snails.

‘This is both moderately disturbing and really fricken cool,’ one person wrote.

‘Jeez, carnivorous snails – hopefully they stay in the water,’ said another.