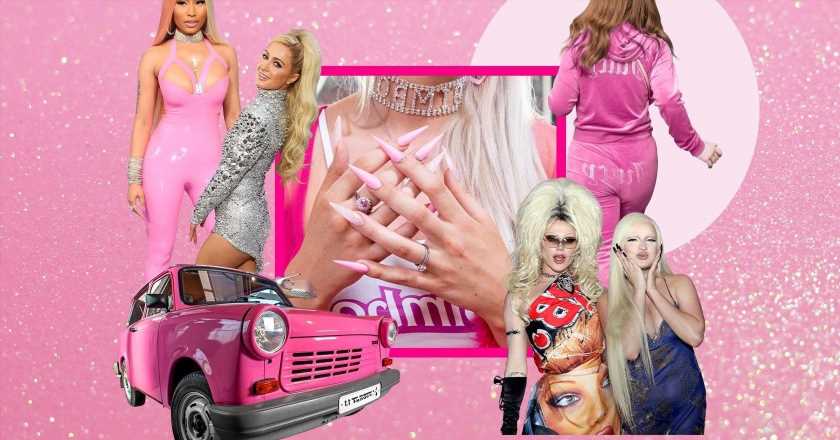 The Y2K bimbo was a staple in 2000s pop culture – but this time around, women are reclaiming the word with a message about the importance of self-care.

The 2020s has been an interesting time for us millennials. While Gen Z has been recapturing the magic of the early to mid-2000s, many of us have been processing the fact that we’re no longer the younger generation, as we watch them trawl through the things that were a staple of our adolescence.

From wired headphones and songs that dominated our iPods in 2006, to the Y2K fashion which we remember salivating over while reading gossip rags and blogs, the Y2K aesthetic is officially back whether we like it or not – and one controversial concept that has made an unexpected reappearance in the 2020s is the bimbo.

While the bimbo of the 2000s was known for her love of super blonde highlights, pink Juicy Couture tracksuits and bedazzled accessories, as well as statements like “that’s hot” (à la Paris Hilton), they also faced judgment for being perceived as superficial with not much substance and were a mainstay across pop culture.

And while the bimbo aesthetic, from the sickly-sweet fashion to the babyish tone of voice has made a resurgence (i-D declared 2021 “the year of the bimbo”), what it means to be a bimbo has evolved drastically.

“There is no right or wrong way to embrace your inner bimbo,” says Chrissy Chlapecka, a TikTok content creator with over 4.2 million followers on the platform. “I think it’s so subjective to who you are because it is such a celebration of loving yourself and it doesn’t mean you have to be like me and have pink hair, wear miniskirts and do your make-up every day – it’s up for your own interpretation.”

Bimbofication (or bimboism) emerged in 2020, following the first year of the Covid-19 pandemic. At a time when people were forced to stay at home and, for some, to assess who they are and what they wanted, creators like Chlapecka took to TikTok to share their thoughts but also their way of living. For Chlapecka, bimbofication provided an avenue to focus on who she is and what makes her feel good. The movement has resonated with millions, with the hashtag #bimbo gaining over 1.2 billion views alone.

“The pandemic really forced me to reevaluate who I was opposed to thinking so much about work, school and everything else,” says the content creator. “I was able to look at myself in the mirror – and I know a lot of other people I’ve talked to say the same thing – and ask myself, who am I? What’s my purpose right now as a person and what makes me happy?”

Chlapecka says that these questions allowed her to hone in on aspects of who she is, what she enjoys and amplify that for her audience as she embraced hyper-femininity and the things that come with that.

“Growing up and seeing bimbos always confused me because all I saw were these amazing women being themselves, celebrating their femininity but then seeing them be judged and harassed by the media for being who they are,” she says.

“With BimboTok, I was able to see the things associated with the bimbo and flip it on itself and kind of reclaim that word.”

Chlapecka is credited as a key founder in the BimboTok movement and is considered “like, the older sister of the internet”, helping to create legions of TikTok bimbos.

But instead of the airhead trope associated with bimbos, this movement of sex-positive bimbos and himbos is all about being true to yourself and taking care of yourself – all while dressed in cute outfits to boot.

In one of her videos, Chlapecka discusses what it means to be a Gen Z bimbo, while dressed in fabulous bubblegum pink ensembles and declaring that the bimbo of today is “pro-sex work, pro-BLM, pro-LGBTQ+, pro-choice” and“always there for the girls, gays and theys”.

“It’s really cool to see so many people hop on this trend and it solidified this feeling I had that being a bimbo can be a celebration of loving yourself and loving your femininity and fully embracing those parts of you without judgment of yourself,” she says.

Amid the bimbo resurgence on TikTok is also the beginnings of a more diverse bimbo movement, which deviates from the blonde-haired, blue-eyed, big-boobed trope which has dominated over the years.

“Prior to TikTok, I always saw bimbos as the blonde, super-pink airheads,” says TikToker Fiona Fairbairn and the podcaster behind The Bimbo Manifesto. “But I feel like I’ve made my own version of being a bimbo and added some WOC representation to the bimbo world.”

Toronto-based Fairbairn, who has over 167,000 followers, is known for her satirical TikToks discussing bimbofication, from how to embrace it in the workplace to relationships, along with creating the bimbo manifesto, a set of rules on how best to live your bimbo life.

“The manifesto is stuff I have been saying to my friends for years and they all thought it was funny,” she said. “So I just made a list of the things and people actually related to it. I was shocked.”

Fairbairn’s bimbo manifesto went viral on the platform but also gained its fair share of controversy for claiming bimbos should “show up everywhere hot all the time” and “don’t participate in discourse”.

“A lot of the manifesto is an exaggeration and satire, but if you read between the lines, you will see what I’m talking about and how it can be beneficial.

“After all, I always joked about how stupid people are way happier, and we all know the expression that ‘ignorance is bliss’,” she says.

“Sometimes I’m just so caught up in my head and overthinking and I was like, you know what, I don’t want to have any thoughts any more, I just want to be carefree and happy, and that served as the inspiration behind my videos.”

“I also love being girly and focusing on my looks, and I noticed how nice people were to people they perceived as an ‘airhead’ and ‘bubbly’.”

The bimbo aesthetic also helped Fairbairn during the lockdown as she found getting ready and taking the time to get dolled up benefitted her own wellbeing. “One thing that helped me get through the pandemic was getting up every day and simply getting ready.

Fairbairn is a firm believer in the “look good, feel good” school of thought and would often spend time dressing up each day. “I would be in the house with dresses, a full face of make-up and jewellery just to be pretty and sit at home and it has done wonders for my mental health.”

While the perception of bimbo has changed, the word itself still seems to garner criticism from some who see the movement as a step back.

“Who the fuck thought the whole ‘bimbofication feminism’ was empowering? It’s still degrading and sexist, and now men think they get to call women that too,” one person commented on Twitter, while another said: “Bimbofication and contemporary femininity is deeply rooted in consumerism and choice feminism. Attaching a couple of progressive words to it doesn’t actually make it political.”

But as Fairbairn notes, the core meaning behind the movement is a celebration of one’s self and also bettering your own mental health – something we could all do with during these particularly trying times, and those embracing bimboism are not letting the criticism stop them from living what they deem to be their best bimbo lives.

“Sometimes ignorance is bliss, and sometimes your brain is your biggest enemy when it comes to your happiness. Sometimes you just need to tell your brain to shut up and just be you,” says Fairbairn.

After years of girlboss culture embraced by millennials, the idea of bimbofication and simplifying life for your own wellbeing is becoming a radical form of self-love among Gen Z.

The rise and grind culture we once lived pre-pandemic is dead and gone and, for some women, has been replaced by a newfound appreciation for taking the easy route. This is manifested through the rise of the bimbo, as people are learning to take the time to not only smell the roses but to bask in them for hours on end – and look cute while doing so.