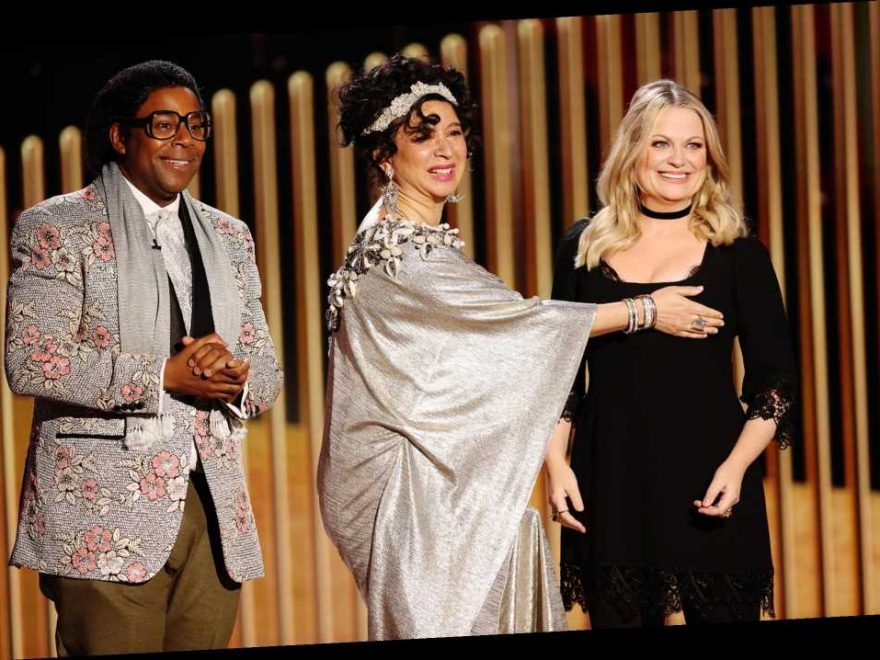 The 2021 Golden Globes were controversial before the ceremony even began.

Hosted by Tina Fey, 50, and Amy Poehler, 49 — returning for the first time since 2015, but in the show’s first-ever bicoastal show — the Globes chose an especially weird crop of nominations this year. Netflix’s “Emily in Paris” got a nod while critical darling HBO drama “I May Destroy You” was snubbed. Meanwhile, the parent organization, the Hollywood Foreign Press Association, has been slammed for its lack of diversity and forced to address the controversy on air.

After all that, how did the ceremony itself turn out? Here’s the breakdown of what worked — and what didn’t — during the 78th Golden Globes.

Tina Fey and Amy Poehler showed that they still sparkle onstage together, even when they’re separated — as Fey delivered her portion of the monologue from New York City’s Rainbow Room while Poehler delivered gave hers from LA’s Beverly Hilton (the event’s usual venue).

The duo included an amusing bit trying to “touch” each other through the screen. Their speech had a mix of typical zingers (“‘French Exit’ is what I did after watching the first episode of ‘Emily in Paris,’” said Fey) along with a call-out to the HFPA for its lack of black members. (“You’ve got to change that,” they implored.) It was an opening filled with both substance and shine — and showed that neither of their stars has faded (even as Fey joked, “I always knew my career would end with me walking around the Rainbow Room pretending to talk to Amy; I just thought it would be later”).

Kenan Thompson, 42, and Maya Rudolph, 48, did a bit together posing as a duo of singers accepting the award for “least original song.” Decked out in bedazzled outfits and goofy wigs, first they claimed to write the theme song for “The Crown” (“exclusively in Netflix Germany,” Rudolph explained) and then they professed their love for each other. While it was nice to see the past and present of “SNL” united together onstage, they’re better than this. It was a waste of two talents.

Newcomer Emma Corrin, 25, won best actress in a TV drama for her scene-stealing performance as Princess Diana in “The Crown,” beating out more seasoned actresses in the category such as Laura Linney (“Ozark”) and Olivia Colman (“The Crown”). It wasn’t quite an upset — since Corrin’s portrayal was widely lauded — but it was still a nice surprise, as she was far from a shoo-in for the category.

Worst: All the tech glitches

While it’s understandable that a ceremony conducted largely using video-chat will have some glitches, the Emmys were able to deliver a smooth broadcast. So what gives, Globes? Daniel Kaluuya almost couldn’t deliver his acceptance speech for playing Fred Hampton in the historical drama “Judas and the Black Messiah” — and it was significant, as he’s only the fifth black actor to win a best supporting trophy.

Particularly in a year when the HFPA has been under fire for their lack of black members, it wasn’t a good look for presenter Laura Dern to have to tell the audience with a grimace, “We unfortunately have a bad connection.” Luckily, he was able to deliver it. “You did me dirty!” he could be heard saying before he realized that his connection was fixed. They did, Daniel.

While the mid-ceremony montages and career-achievement award presentations can often feel like filler, this year’s Jane Fonda tribute and career montage hit the perfect note — as did her speech when she was presented with the Cecil B. DeMille Lifetime Achievement Award. “Art has always been not just in step with history, but has led the way — so let’s be leaders,” she said. With a newly silver coif (joining the likes of Ben Stiller), she also showed up in person; a welcome sight during a year when most stars (understandably) appeared via video chat.

Former “SNL” star Jason Sudeikis, star and creator of AppleTV+ breakout comedy “Ted Lasso,” clearly didn’t expect to win a Golden Globe for “Best Actor in a Musical or Comedy.” Looking like he just rolled out of bed, he delivered a rambling acceptance speech. While he deserved the win for the delightful “Ted Lasso,” the speech was underwhelming. However, he did liven up a fairly dull ceremony by causing social media to speculate whether he might be high.

Mark Ruffalo, 53, scored a win for best actor in a miniseries or TV movie for his role starring as twins in HBO miniseries “I Know This Much Is True.” Two of his three kids invaded his speech, leaping around behind their dad and clapping him on the shoulder as he accepted his award (his first Globe win and fourth nomination). His speech was heartfelt, but it added an extra cute and human dimension to see someone thank their family while they literally leaped around in the frame.