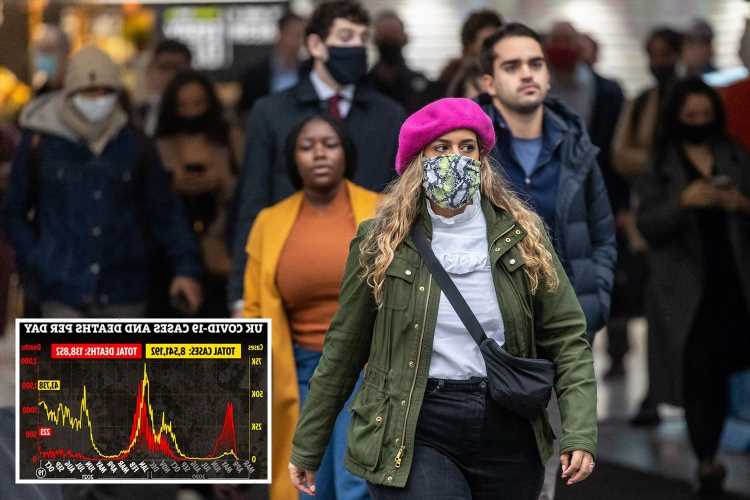 PLAN B could be activated this winter if Covid gets out of control.

With sky-high Covid cases, a slow uptake of boosters and jabs in teenagers, and the cold weather approaching, the prospect of Plan B is looming. 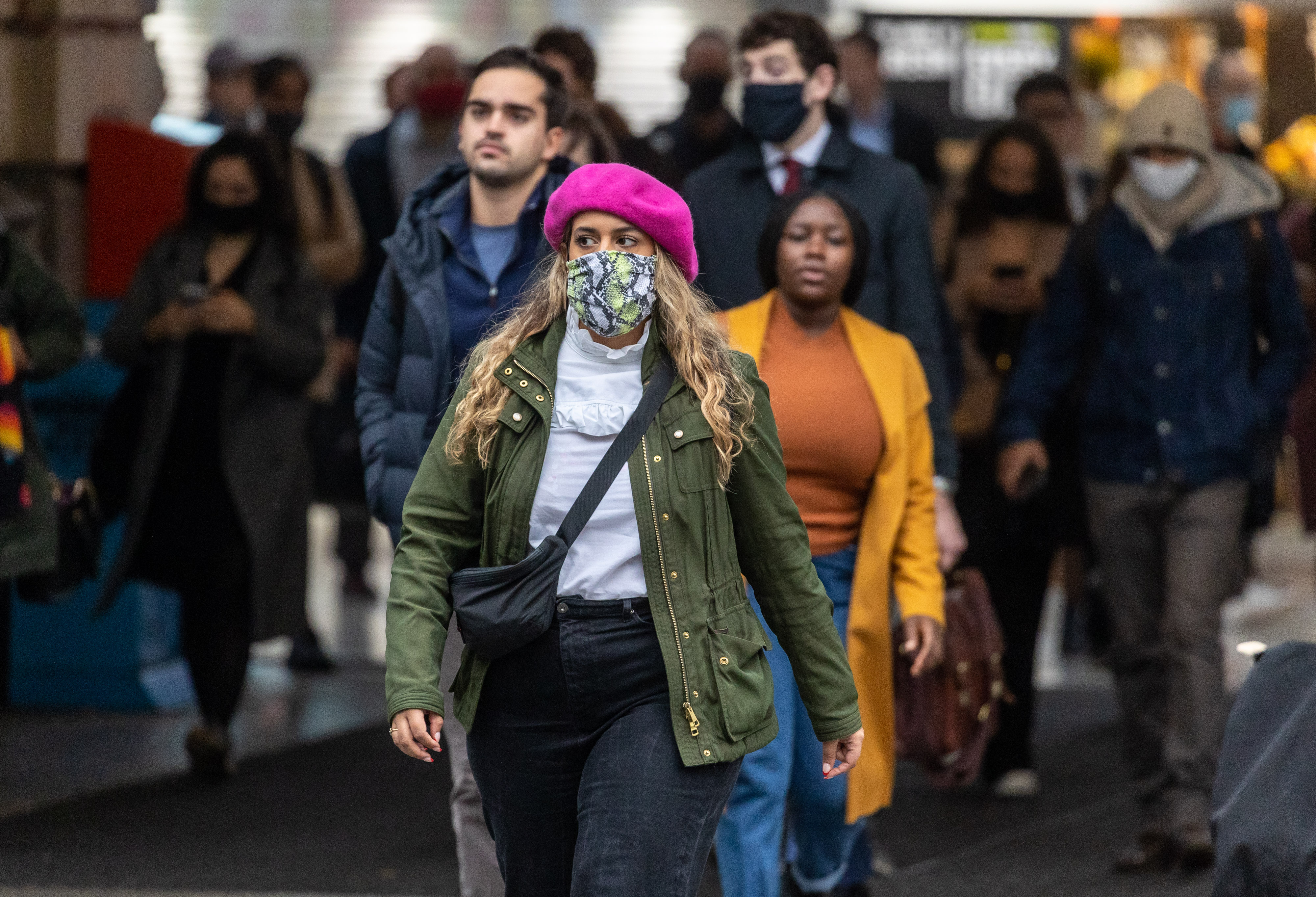 PM Boris Johnson’s Plan B could see the return of face coverings, work-from-home orders and vaccine passports for some events.

It “should be possible” to avoid full-scale lockdowns with the successful vaccines preventing severe disease, the Government’s winter plan says.

The document outlines a Plan B in England which “would only be enacted if the data suggests further measures are necessary to protect the NHS”.

But when announcing the plan in the House of Commons in September, the Health Secretary Sajid Javid said there was no single metric that would trigger Plan B.

“Any responsible government must prepare for all eventualities, and although these measures are not an outcome anyone wants, it’s one that we need to be ready for just in case,” Javid said.

Amid the threat of a fourth wave, the PM’s spokesman reiterated there were no plans to use the contingency measures in Plan B unless there is a “significant risk of the NHS being overwhelmed”.

The spokesman said: “There are a number of different factors that would play into that decision.

“Largely it would be required when there was a significant risk of the NHS being overwhelmed.

“We are not at that point. Because of the vaccination programme, the levels we are seeing in both patients admitted to hospital and deaths are far lower than we saw in previous peaks.”

So what will ministers likely be taking into consideration now?

In order to keep the freedoms we currently have, the Government set out Plan A, which hinges on booster jabs for the most vulnerable so that they have maximum protection this winter.

It will keep hospitalisations and deaths down – the two most important factors for keeping pressure on the NHS.

There are almost 30 million people in the UK that fall under the priority groups who are advised to get a third vaccine dose.

They will each become eligible six months after their second dose, which is when immunity starts to wane.

Eight million are eligible now, and 5.5 million have been invited. Four million have taken their offer, leaving millions potentially at risk.

Professor Andrew Hayward, an epidemiologist at University College London and a member of Sage, has said we need to “speed up” the rollout of vaccines.

He told Times Radio: “We are entirely reliant on the vaccination programme to reduce hospitalisations and deaths, and we know immunity from those vaccines, it has waned quite a lot over the course of five or six months, and there is evidence it is not from infection but also severe disease.

“It is important for people if they have been offered a vaccine to take that up.”

Millions of adults will be urged to come forward the moment they are eligible in an official ad campaign to be launched this week.

2. Vaccinating teens – and the rest of adults

Children and adolescents have the highest rates of Covid in the UK, driving high infection rates.

As has always been the case, it risks the virus spilling out into older generations who are more at risk of severe disease.

Kids from the age of 12 years old are able to get one dose of the Covid vaccine, and over 16s can get two.

But analysis by the PA news agency suggested there was low take-up of jabs among 12-15 year-olds – as little as five per cent in some areas.

In Scotland, where young people can get their jab in drop-in centres, uptake is already over 50 per cent in half of local authority areas.

In a bid to ramp up vaccinations, major jabs centres in England will open their doors to teens during half term in a bid to boost uptake in school children.

Professor Neil Ferguson, from Imperial College London, and a leading member of the Scientific Advisory Group for Emergencies (Sage), said it was “critical we accelerate the booster programme” as well as jabs for teenagers.

He suggested they should be given two doses of a jab to block infection and transmission – with guidance currently saying they need just one.

Normally the NHS has flu to deal with in a normal winter, coming under huge pressures to deal with thousands of cases.

In the winter of 2020, flu cases were very low because people were generally under stay-at-home orders due to the Covid outbreak.

But now, with people mixing again, there is the risk of a double whammy of flu and Covid threatening the NHS.

Experts have said there is the potential for 60,000 deaths from flu this year alone.

Patients with flu tend to spend less time in hospital than those with Covid.

But there will also be difficulty within hospitals to keep infection measures – such as social distancing – in place, which puts pressure on beds.

Everyone who is eligible for a free flu jab has been urged to take it, including all over 50s.

Hospital numbers are the main metric for assessing if the NHS is struggling.

Currently Covid admissions are not off the scale.

The number of patients admitted in the UK per day has stayed relatively stable for the past couple of months, at an average of about 850.

This is nowhere near the second wave peak of 4,200.

But NHS bosses are urging the Government to be proactive and prevent such disastrous numbers while there is still time.

Matthew Taylor, chief executive of the NHS Confederation which represents health bodies, warned “we risk stumbling into a winter crisis” unless measures are introduced now.

“The Government should not wait for Covid infections to rocket and for NHS pressures to be sky high before the panic alarm is sounded,” he said.

Hospital admissions directly translate to deaths. But the successful vaccines have largely severed this link.

Deaths were up 14.6 per cent in the past seven days, with an average of 130 fatalities per day.

On Tuesday, the Government said a further 223 people had died within 28 days of testing positive – the highest daily figure since March 9.

The UK is walking into winter with already concerningly high infection rates.

The seven-day average for cases is standing at 44,145 cases per day – the highest level for almost three months.

Case rates are going upwards in almost every authority in England.

Scientists have also warned a new sub-variant of the Delta strain, named AY.4.2, is gaining a foothold and could be 15 per cent more infectious.

Data from the COVID-19 Genomics UK Consortium show that the variant makes up almost seven per cent of cases in the UK in the past 28 days.

Downing Street has said it is keeping a close eye on the AY4.2 coronavirus variant but insisted there is no evidence it spreads more easily.

It also insisted the Government was “not complacent” about rising Covid cases.