Up to five new ‘teal’ independents in the House of Representatives will demand greater action on climate change and a strong corruption watchdog as their first order of priority in a parliament that could see the crossbench grow to as many as eleven.

Even if Labor leader Anthony Albanese forms government, he will face pressure from the wave of new teal MPs as well as the Greens to lift his 2030 emission reduction commitment as he faces the possibility of have to deal with the largest crossbench since World War 2. 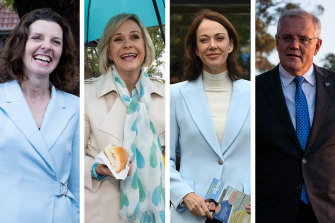 Allegra Spender, Zali Steggall and Sophie Scamps did not rule out backing Scott Morrison before the election.Credit:Nine

But the election of up to five new climate-focused independents confirmed a bloodbath in the Liberals’ traditional heartland where their voters deserted them in favour of progressive women.

Former deputy leader Julie Bishop unleashed on her party, saying it would need to confront its women problem.

“When the Liberal Party carries out the post-election analysis, they must address the issue of women in the party,” she said.

“So many Liberal women told me they did not see their concerns, their interests reflected in the party that was led by Scott Morrison and in Coalition with Barnaby Joyce. They just didn’t see them as having any empathy for the concerns of women.

“We make the laws for every other workplace in Australia yet women were saying it was not a safe place to work. I think that resonated with women across Australia.”

Finance Minister Simon Birmingham said “every seat that the Liberal Party lost was lost to a female candidate, and so there is a real challenge there for us”.

On Saturday night four of the teal candidates were on track to win seats off Liberal MPs – Sophie Scamps in Mackellar, Allegra Spender in Wentworth, Kylea Tink in North Sydney, and Zoe Daniel in Goldstein – while Monique Ryan was ahead of Treasurer Josh Frydenberg in Kooyong.

All five candidates had previously named an integrity commission and greater action on climate change as their key demands for backing either major party to form government.

With returning MPs Rebekha Sharkie, Zali Steggall and Helen Haines, who also hold former Liberal seats, it would bring the total number of climate and integrity-focused independent MPs to eight.

None of the independents before the election declared which side they would back, saying they would negotiate with both leaders in a hung parliament.

On Saturday night Scamps said she would be happy to sit at the table with both leaders and “wait to see what they offer on the negotiating table”.

“But it’s very crystal clear what I have taken to the election and it’s come directly from the people of Mackellar. Urgent and strong action on climate change,” she told Channel Nine.

She said a “federal integrity commission” would also be “on the table” in negotiations.

“That’s what we will be fighting for and I will be standing strong for the people of Mackellar,” Scamps said.

Steggall said Australia now needed to “think past the idea of a political party”.

“The fact is that I think the crossbench can work collaboratively really well with both sides of politics,” she said.

“It is a real moment for the major parties to rethink the arrogance that they don’t have to consult with communities any more.”

Monique Ryan last month made clear that Prime Minister Scott Morrison would have to deepen cuts to carbon emissions from his target of 28 per cent by 2030 to her target of 60 per cent by the same year, but said this would also apply to Labor leader Anthony Albanese.

“At this point, neither of the major parties has come to the party, to the table, in the same way that the people of Kooyong want them to,” she said.

“They hate both parties’ wasteful spending that seems solely designed to retain power,” she said of the feedback she had received from voters.

Zoe Daniel, who was set to beat Liberal assistant minister Tim Wilson, said she would talk to leaders from the two main parties.

“To do otherwise would be a breach of my responsibilities as an independent member of parliament,” she previously said.

In her victory speech Daniel paid special tribute to late broadcast journalist Caroline Jones, who “was a great mentor to me, a special journalist from the ABC who lifted other women up, including me. I would like to dedicate this victory to Caroline Jones.”

All of the independents were backed by Simon Holmes a Court, the founder of the fund-raising vehicle Climate 200.

Earlier on Saturday night, Holmes a Court told the ABC that Climate 200 had raised $12 million for independent candidates.

Throughout the campaign, the candidates and Holmes a Court repeatedly denied Coalition claims that the teals were “fake” independents and that he was pulling their strings. They insisted Climate 200 had no say in choosing candidates, where they run or which policies they support.

There was also a climate-led onslaught in the Senate on Saturday night. The Greens were on track to gain a tenth Senate seat, while rugby union great David Pocock looked set to break the major party stranglehold on the ACT upper house.

The Greens were set to get a second Senate seat in Queensland, bringing its total number in the upper house to 10.

It was also looking to gain extra Senate seats in NSW and South Australia.

This could mean the Greens not only have the balance of power in the lower house in a minority government, but have much greater negotiating power in the Senate as well.

Meanwhile, Pocock was edging just ahead of Liberal senator Zed Seselja in the ACT, potentially giving him the territory’s second senate spot.

It would be a major blow for the Liberals, with the major parties holding the ACT’s two Senate spots for decades. It would be the first time an independent has held a Senate spot in the territory.

Pocock campaigned hard on climate, showing that green-leaning independents were awarded in both houses.