The man was not walking, he was strutting. The dusty road was a catwalk. Here, draped in vivid designer clothing, was a rock star. A celebrity in the Congo.

"He was full of colour and full of joy. My mouth just dropped. I was thinking, 'what and who is this person?' He is just magnificent in this environment. I was basically blown away."

That, Tariq Zaidi was told, is a sapeur. The awed photographer was in the midst of a six-month assignment, travelling by land from Morocco to South Africa. I will come back, Zaidi promised himself. 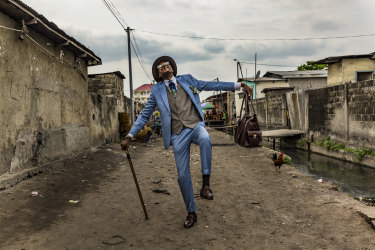 Elie, 45, struts his stuff in the streets of Brazzaville. He has been a sapeur for 35 years and his elaborate outfits bring joy to himself and his community.Credit:Tariq Zaidi

The wonderment did not abate. The magnetism of the sapeur drew the photographer back to the Congo a few years later. Sapeurs are members of La Sape, the Société des Ambianceurs et des Personnes Élégantes (Society of Ambience Makers and Elegant People), a fashion subculture in the neighbouring cities of Kinshasa in Democratic Republic of Congo and Brazzaville in the Republic of the Congo. Followers of La Sape – men are known as sapeurs, and women as sapeuses – are resplendent in flamboyant, intricately styled outfits including garments from high-end fashion brands. It's not just about the silk socks or the hats that are tilted just so, La Sape is a philosophy. It's a way of life. And, of course, there's that walk.

"Sapeur is not only the way they dress, it is the way they act and the way they walk. They don't actually walk – they strut down the street. They have a special way of walking. If you harp back to Saturday Night Fever with John Travolta, it was the first time you saw someone strutting down the street like that. These guys do it, but with much more panache," Zaidi says.

He was full of colour and full of joy. My mouth just dropped. I was thinking what and who is this person?

Just as Zaidi was drawn to the finely dressed man he saw, members of the community will follow sapeurs and sapeuses down the street, cheering them on with cries of Viva la sape! By day they are run-of-the-mill citizens – bricklayers, police officers, gardeners, shop owners – who transform into dandies. In countries where large amounts of the population live in poverty, La Sape followers lift the spirits of the streets. More than spreading cheer, Zaidi believes La Sape functions as a form of empowerment and colonial resistance.

Yamea, 58, who has been a sapeur for half a century, brings colour and joie de vivre to his community. He has nine children and works as a brick-layer. His favourite item of clothing is his hat.Credit:Tariq Zaidi

"This person has made tremendous sacrifices to get these clothes, saving tremendous amounts of money to buy these clothes, borrowing from friends and family, getting their friends to bring in clothes from outside the country, so they can look amazing. They are respected in their community. They bring tremendous joy to the community. They are treated like gods and rock stars and they bring happiness at the end of the day to everybody," he says.

This joy, pride and style are captured in Zaidi's Sapeurs Portraits Series, will be exhibited this month as part of the Head On Photo Festival. There's a powerful contrast between the bright, over-the-top fashion and the often dirty dilapidated surroundings. In one photograph, a man wearing fluoro orange pants and tie, a green vest over a starched white shirt, and a candy-striped blazer stands on a dusty track, surrounded by goats, with a background of trash, weeds and abandoned mattresses. That man is Maxim, a 43-year-old father-of-three, who has followed La Sape since he was seven and pairs his own fashion creations with Yves Saint Laurent, Pierre Cardin and Christian Dior. In another image, mother-of-three and police officer Judith, 39, poses in a blue suit with her 10-year-old son, Okili, a relative newcomer to La Sape. Wearing a matching black-and-white checked top, trousers, bag and socks, Yamea, 58, a bricklayer, leans on a cane and beams into Zaidi's the camera.

"There’s a human connection to these people, across languages and borders and frontiers. There is something special there. When I went there, I felt that and and saw that, and that's why I wanted to photograph them," Zaidi says.

"It was a wonderful feeling, watching them and how their community interacted with them … That whole combination was why I love photography." 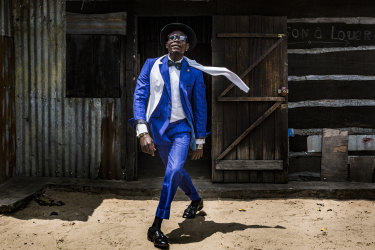 Boukaka 30, has been a sapeur for 25 years. He works as an electrician and is married with one child. Although he loves his Ray Ban glasses and Tissot watch, his favourite accessory is his earring. Credit:Tariq Zaidi

Walking the streets of Brazzaville with La Sape practitioners is far from where you would have found Zaidi five years ago. Rewind to 2014, and he was in a corporate office informing his boss in a media company that he wanted to leave his senior position to pursue a career in photography. "Are you bonkers?" was the most common response from alarmed friends and family when he told them of his choice.

And maybe his decision was a little bonkers. For starters, he didn't have a camera. He knew nothing about Photoshop, lenses or light rooms. He was the kind of amateur photographer who used to take holiday snaps, and had a camera round his neck as a teenager. But, perhaps, it would have been more bonkers to stay in a job for which he lacked all enthusiasm.

"I was just losing all passion and energy. In terms of the business environment I was in, I had peaked and I wasn’t getting a lot of enjoyment out of it. It was a question of, what else am I going to do with my life? I don’t want to do this for the rest of my life. I want to do something where I’m passionate." 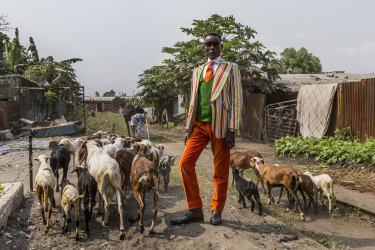 Maxim, 43, has been a sapeur since he was seven years old. He mixes labels such as Yves Saint Laurent, Pierre Cardin and Christian Dior with suits that he has designed and made himself. Now married with two children, he teaches others the art of how to dress elegantly. Credit:Tariq Zaidi

If Zaidi was weary of the business world, it had at least taught him how to make a mean-looking spreadsheet. He put together a business case for his photographic ambitions – he saved funds to buy equipment, sought mentors and accepted that he wouldn't make money for five years. His litmus test would be photography competitions – success quickly followed hard work and a determination to improve. His accolades, and this is just last year, include named the Photographer of the Year at POYi75 (Pictures of the Year International Competition); receiving an honorable mention for the UNICEF Photo of the Year Award, and being selected as a PDN Photo Annual winner.  He is now represented by major agencies including Zuma Press, Caters and Getty. 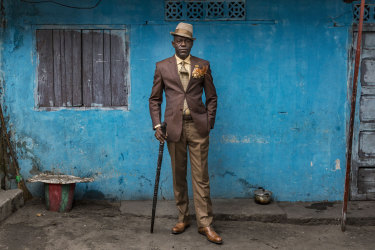 Basile, 51, has been a sapeur for 30 years and works as a manager of human resources. His most treasured item of clothing is his Jean Courcel suit. Credit:Tariq Zaidi

"To be absolutely frank, I probably work a lot harder than I did previously. The difference is, I actually want to do this. I love to do this. Even though I am working seven days a week, it doesn't feel like that. It delivers a kind of energy that it is very hard to get. No matter what you are doing in a business environment, it never brings this kind of passion or joy. I don’t regret it, I know I have made the right decision," he says.

Zaidi has photographed communities around the world including in North Korea, Georgia, Haiti, Indonesia, Mongolia and South Sudan. While such locations might appear challenging from a Western point of view, Zaidi says, they are not war zones and he is a well-experienced traveller (he has lived in 10 countries and travelled to more than 100).

"My passion centres around, if I try to put it into words, capturing the dignity, purity and soul of people within their natural environment, wherever they are, and that's what I try to do not only through my sapeurs images but through all of my work." 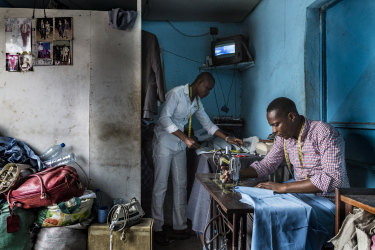 Arnaud 31, has been a sapeur for eight years. He works as a tailor and his favorite items of clothing are those he has made himself. Photographs of his creations adorn the walls of his workshop and home.Credit:Tariq Zaidi

Zaidi is working on a long-term project called Capturing the Human Spirit, photographing some of the poorest communities in the world. He has so far photographed slum communities in Cambodia, Rio de Janeiro and Haiti.

My passion centres around, if I try to put it into words, capturing the dignity, purity and soul of people within their natural environment.

"What I am trying to show through this work is yes, the environment is very, very hard. It is very challenging. There might not be electricity all the time, there might not be sanitation, but a large number of people around the world, millions, close to billions, live in this environment. You can't just discount the fact that they live in this environment. There are communities, they have families, they try to send their kid to school, they cry, they laugh, they drink, they dance, they have parties. That is the side I want to show of these communities. A side that unfortunately is not shown very often in the press." 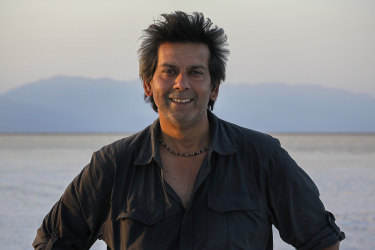 Zaidi spends about eight months of the year away from his home in London – when we speak he is a home for a few days before he travels to Georgia. He always looks forward to a hot shower and a comfortable bed, but he wouldn't have his life any other way. Now, he's got a little more swagger to his step.