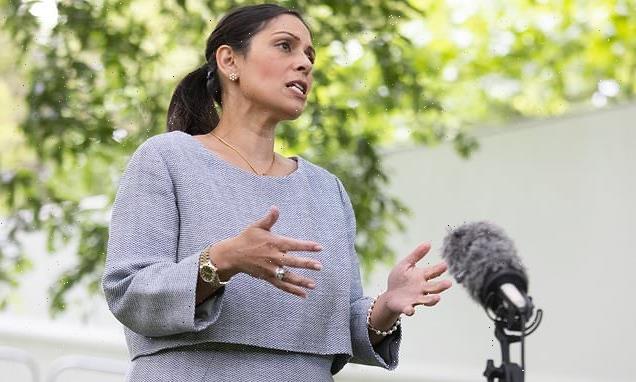 STEPHEN GLOVER: My plan to sort the migrant crisis – and save the Tories… As the Rwandan scheme has seemingly failed, what is the objection to identifying a British-owned island to which all asylum seekers would be sent?

Monday, September 5, will be a big day for this country: the winner of the Tory leadership contest, and therefore our next Prime Minister, will then be announced. Almost everyone expects this to be Liz Truss.

No incoming PM has faced such stupendous problems since Winston Churchill took up the reins of power in May 1940. Talk about a baptism of fire!

It so happens that another big event is scheduled for the same date. A High Court hearing will consider the legality of forcibly sending to Rwanda some asylum seekers who arrive on our shores in small boats. Pending the outcome of the case, the Government has put its Rwandan plan on ice.

Today there is a new twist. Home Secretary Priti Patel — the architect of the Rwandan plan — has produced a scheme to expedite removals of Albanian migrants. This will be done with the assistance of Albanian law enforcement officers, who will work with British officials in this country.

A recent leaked UK intelligence report suggested that as many as four migrants out of ten crossing the Channel hail from Albania, a poor country but a peaceful one that enjoys at least the rudiments of democracy. 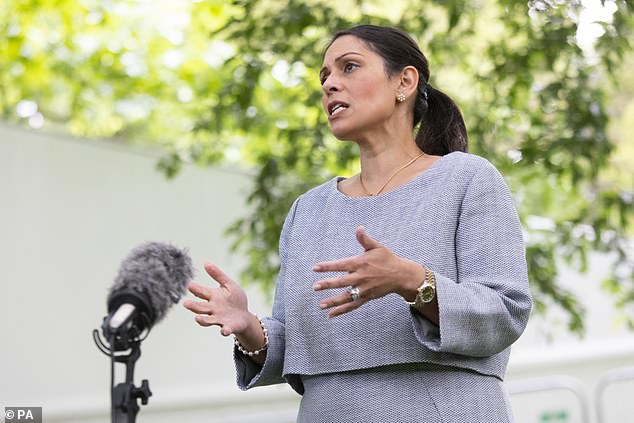 Today there is a new twist. Home Secretary Priti Patel — the architect of the Rwandan plan — has produced a scheme to expedite removals of Albanian migrants 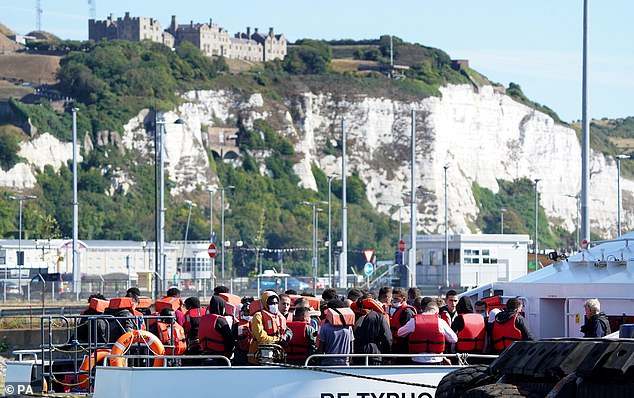 This will be done with the assistance of Albanian law enforcement officers, who will work with British officials in this country

Without doubt the situation has been deteriorating in recent weeks, with unprecedentedly high numbers of Channel crossings. On Monday, 1,295 migrants were recorded as landing on British soil.

The Royal Navy and Border Force intercepted 27 boats from France, each on average carrying nearly 50 migrants. Over 22,500 migrants are recorded as having reached the UK by this route so far this year, more than double the rate in 2021 at a similar juncture.

The truth is that, despite it being nearly three years since the last general election, the Government has failed to crack the problem. Things have, in fact, got very much worse, and it is a reasonable bet that, unless something radical is done, they will get worse still.

I will make a prediction. Unless the new Prime Minister succeeds in preventing the influx of migrants, there will be a savage public reaction as many voters blame the Tories for failing to regain control of our borders, which was supposed to be a great bonus of Brexit.

In other words, to the combustible mix of challenges facing the next PM — inflation apparently soaring out of control and a severe cost-of-living crisis to boot — there may be added a migrant crisis, which could inflict just as much damage to Tory electoral prospects.

Who is to blame? Some will point the finger at the medley of bishops, Labour politicians and Left-wing lawyers who have predictably rubbished the plan, unveiled by Ms Patel in April, of packing off migrants to Rwanda.

Those who have scorned that scheme surely have an obligation to come up with a viable alternative to deal with the crossings, which put migrants at risk of drowning in often rickety boats. Nor do most of them appear to have a legal right to enter Britain.

For although critics of the Government commonly represent these people as refugees escaping from unpleasant regimes, the majority of them are not. 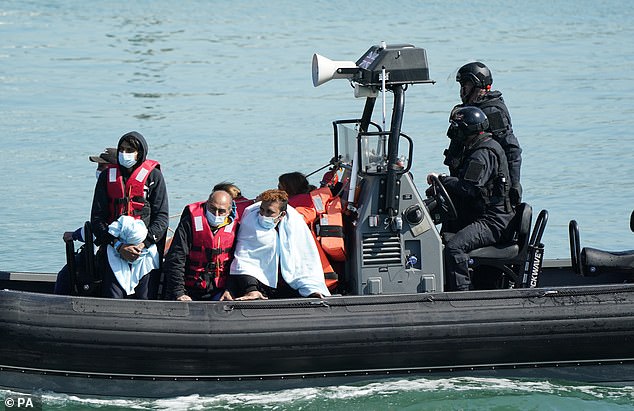 A group of people thought to be migrants are brought in to Dover, Kent, following a small boat incident in the Channel 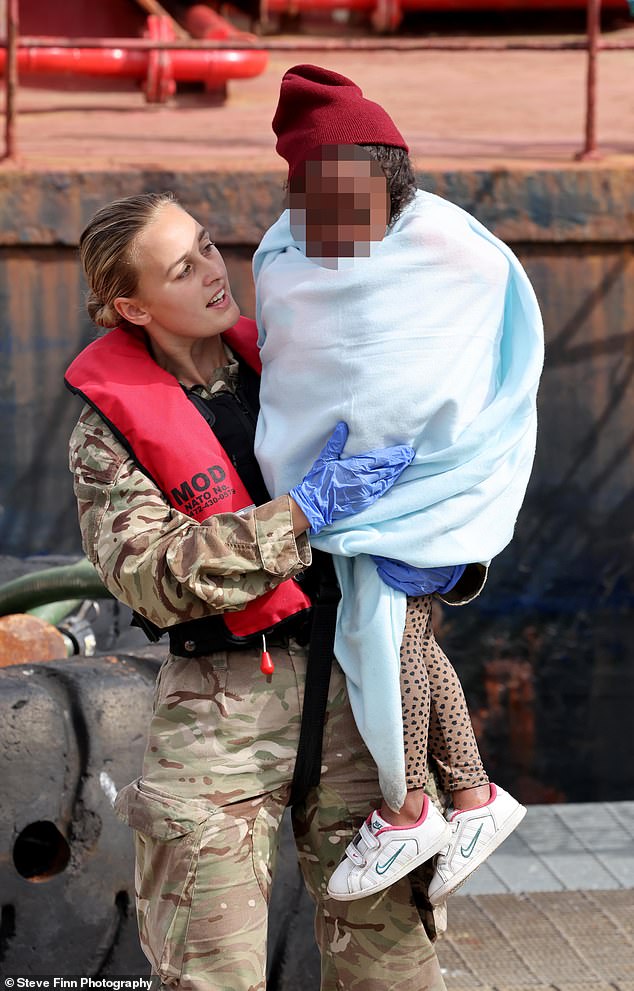 A female soldier carries a young child, wrapped in a blue blanket, in her arms, while her family followed behind with their belongings in bags

There is no reason to doubt Ms Patel’s contention that 70 per cent of those crossing the Channel are economic migrants. If four out of ten migrants are Albanians seeking a better life, that tells its own story.

Those who have expressed such horror at the Rwandan plan — and I include the lobby groups which have brought the case to be heard in the High Court on September 5 — are greatly at fault in not coming up with their own policy.

The fact remains that the Rwandan plan is seriously flawed. The main reason, as I wrote in these pages in April, is that Rwanda is a virtual dictatorship presided over by an autocrat, President Paul Kagame, who has been accused of closing down newspapers and threatening Rwandan exiles abroad.

If Priti had found a decent, law-abiding country to which we could send unwanted migrants, there could be no reasonable objection. But she hasn’t. The democratic deficiencies of Rwanda are bound to loom large in the High Court case that campaigners are bringing against the Government.

Even if by some miracle the Government wins the hearing, there will be other practical considerations. At the end of last month, the Rwandan authorities let slip that they can accommodate only 200 migrants at a time, far fewer than Priti Patel had hoped.

It is also worth adding that eight years ago Israel started sending asylum seekers to Rwanda but did not find its government a very satisfactory partner. The Israeli scheme was scrapped because it was unworkable.

I would like to be proved wrong, but it seems unlikely that Priti Patel’s Rwandan plan — on which, by her own account, she toiled for eight months — is ever going to supply a solution to the migrant crisis.

Her chances of remaining Home Secretary in the next administration have been considered remote. Some will see the announcement of an agreement with the Albanian government as a desperate last-ditch attempt to hang on to her job. 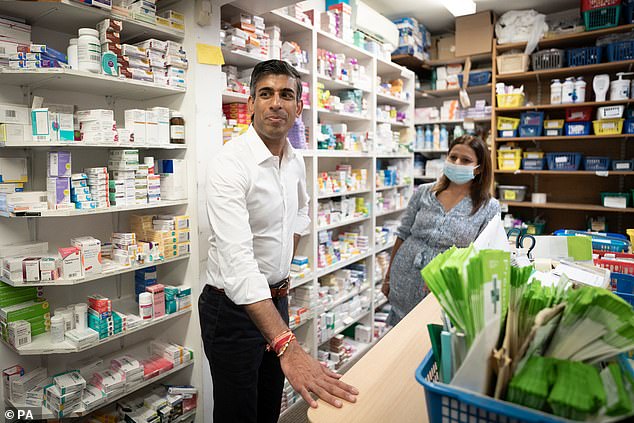 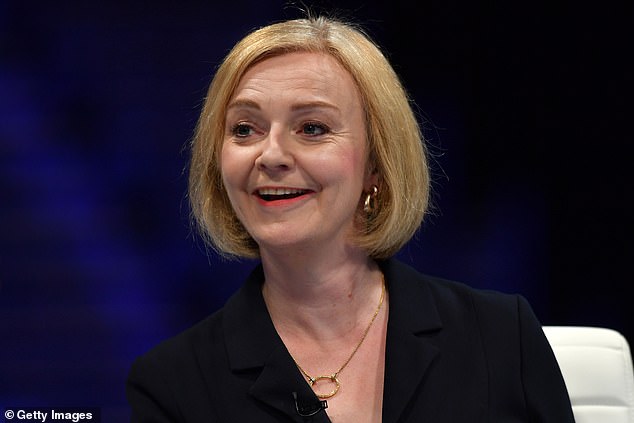 The winner of the Tory leadership contest, and therefore our next Prime Minister, will then be announced. Almost everyone expects this to be Liz Truss

Will cooperation with Albanian officials bear fruit? The danger is that it will be frustrated by activist, Leftist lawyers who will claim that removing Albanians almost as soon as they have set foot in Britain will violate their human rights. But you can’t fault Priti for trying.

Both Liz Truss and Rishi Sunak have committed themselves to the £120 million Rwandan plan during the Tory leadership contest, though Rishi has been accused of trying to scupper it during Cabinet discussions when he was Chancellor. Whoever becomes the next Prime Minister must quickly come up with an alternative.

Maybe there is a benign democratic state somewhere which would welcome our rejected asylum seekers. Good luck to Liz or Rishi if they can find such a place, but I doubt that it exists.

The Government must deal with this problem itself. Even if the number of Albanian migrants is reduced, there will always be other economic migrants intent on taking advantage of the benefits of living in Britain.

As the Rwandan scheme has seemingly failed, what is the objection to identifying a British-owned island, which need not be off our immediate coast, to which all asylum seekers would be sent and processed by British officials under British law?

Ideally, this island would be austere, so migrants would think twice before crossing the Channel. Saint Helena or the Falklands might fit the bill. Economic migrants would be sent back to the countries from which they came, while genuine refugees would be offered asylum here. The European Court of Human Rights might scream and shout, but so what?

What is certain is that a radical and effective policy is required. Priti’s Rwandan idea isn’t going to fly.

Later this year, official figures are likely to show that legal immigration has climbed to levels last seen before the 2016 EU referendum. There will then be a tremendous hullaballoo.

If the Government is also deemed incapable of solving the migrant crisis, its predicament will be perilous. People will reasonably ask what the point is of winning back control of our borders if nobody takes a blind bit of notice.