STEPHEN GLOVER: The amber list shambles has marked out the border between Boris Johnson and Rishi Sunak

The Prime Minister’s house and the Chancellor’s residence are next door to each other in Downing Street. It is the easiest thing in the world to stroll from No 10 to No 11 and vice versa, or to meet in the shared garden.

But when, a few days ago, Rishi Sunak had something to say to the Prime Minister about the need to ease travel restrictions, he sent a letter instead of popping round.

Somehow the media found out about Mr Sunak’s reproving missive, though his people deny it was leaked. The UK’s obstructive travel policy, so he wrote entirely correctly, is ‘out of step with our international competitors’.

Whether or not it was leaked, the letter suggests that Rishi is exasperated with Boris. We may reasonably infer that he believes that if he had made his point verbally to the PM, it would have passed through one ear and out of the other.

Is this disagreement a portent of further ructions? I expect so. It would be hard to find two more dissimilar politicians. Mr Sunak is a details man averse to splashing taxpayers’ money on grand projects. Mr Johnson is a non-details man who is seldom happier than when spending other people’s cash.

Far too early, of course, to write off Boris and install Rishi in his place. But levels of frustration are rising in the Tory Party. A surprisingly large number of its MPs, not all of them on the libertarian Right, grumble about the PM over a wide range of issues. 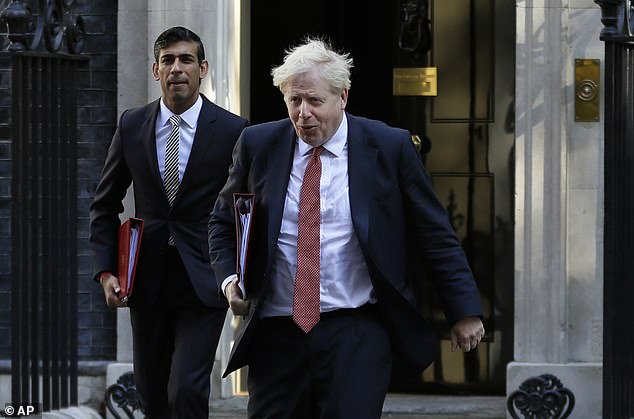 It would be hard to find two more dissimilar politicians than Rishi Sunak (left) and Boris Johnson (right). Mr Sunak is a details man averse to splashing taxpayers’ money on grand projects. Mr Johnson is a non-details man who is seldom happier than when spending other people’s cash [File photo]

Meanwhile, in the latest poll of Tory members by the Conservative Home website, Mr Johnson’s rating has plummeted by nearly 36 points in a mere four weeks.

He is now close to rubbing shoulders with the unloved Housing Secretary, Robert Jenrick, and the even less esteemed Education Secretary, Gavin Williamson. Mr Sunak, by contrast, remains the second most admired Cabinet minister among the Tory faithful.

Boris’s popularity fell after he and Rishi tried to circumvent self-isolation rules last month when they had come into contact with Sajid Javid, the new Health Secretary, who had tested positive for coronavirus. The rank-and-file hold the PM more culpable than they do the Chancellor for this moral slipperiness.

Admittedly such ratings can change in the twinkling of an eye. Nonetheless, among Tory grassroots, who are normally apt to swoon whenever the PM opens his mouth, there is increasing irritation with him.

Mr Sunak senses this — and shares it. Is a plot to oust Mr Johnson already underway? We can’t say the starting gun has definitely been fired, though according to one report the Chancellor has been consulting Lynton Crosby, the notorious Australian political strategist.

But there is undoubtedly confusion and dissension at the top of Government, with the Chancellor challenging the PM over the nightmare of our irrational and contradictory ‘traffic light’ travel system, and Cabinet ministers at loggerheads.

To say that the confusion originates in Boris Johnson’s mind would be unfair, but he has presided over an almighty muddle, without evident heartache or apology as it has spread to encompass the millions of people contemplating going abroad.

Look at the cock-up over France, which uniquely was placed on a so-called ‘amber plus’ list. Even double-jabbed British travellers returning from France to the UK must quarantine for up to 10 days. If the country were to be put on the red list, they would face having to pay £1,750 each to quarantine for ten days in a hotel. 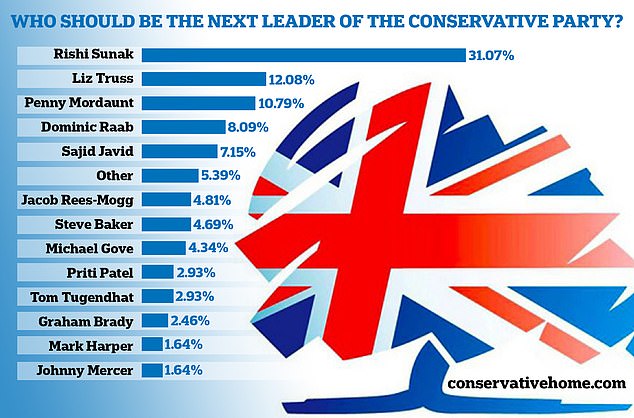 Rishi Sunak is the clear favourite to be the next leader of the Conservative Party, according to a poll on the party’s website

Why was France put on an amber plus list? According to Dominic Raab, the Foreign Secretary, it is because the allegedly more dangerous Beta (or South African) variant is prevalent in the remote French island of Reunion, some 5,800 miles away.

Not so, says Transport Secretary Grant Shapps. He claims the Beta variant has also been ‘an issue in particular in northern France’. Fact: the Beta variant accounts for only 1.9 per cent of all cases in France, and that number is dwindling.

So Mr Raab says one thing, Mr Shapps another. They can’t agree about the reasons for a rule that has inconvenienced hundreds of thousands of British tourists. Both of them are on the wrong track, since the Beta variant is barely an issue in France.

In any case, it turns out that the rationale for being so fearful of the Beta variant was misplaced. The Government put its faith in a small South African study which suggested that the AstraZeneca vaccine was much less effective against Beta.

Now new research appears to establish that even a single dose of AstraZeneca gives more than 80 per cent protection against hospitalisation or death from the Beta variant.

Mr Shapps, by the way, was excluded from the meeting in which Mr Johnson and Mr Javid foolishly decided to put France on the amber plus list, and is reported to have been none-too-pleased. Mr Javid had been billed as someone who would stand up to coercive health officials, but he too readily caves in. 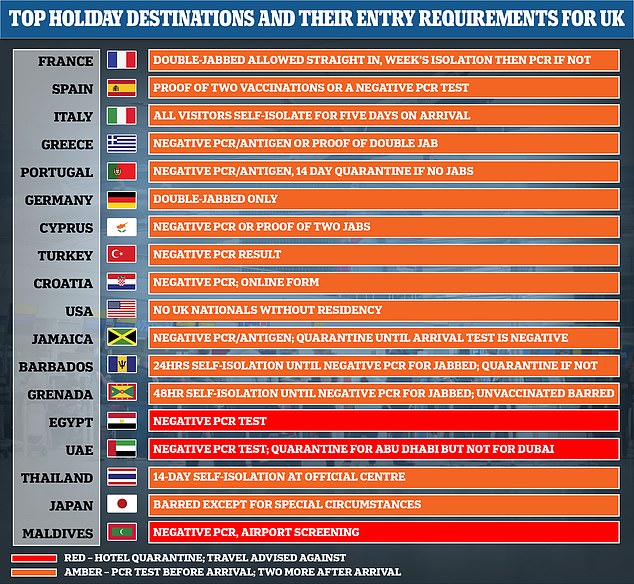 Ministers meet again on Thursday. They must immediately take France off the amber plus list. The decision to put the country on it was wrong-headed on every count, creating muddle and anxiety for thousands, if not millions, of hardworking families.

Last night, following Mr Sunak’s timely letter, as well as pressure from the travel industry, Boris Johnson strongly hinted at the abandonment of the pernicious ‘amber watch list’, which was almost introduced last week. Yet another U-turn.

Amber watch list countries would have included those that are currently amber but could have been moved to the red list at a moment’s notice. Spain, Greece and Italy had been mooted as candidates.

Putting Italy on an amber watch list would have been especially idiotic, since the Beta variant accounts for less than five per cent of its cases. Moreover, its infection rate is only a quarter of the UK’s.

The fact is that we remain at the mercy of the Government’s whim, and victims of thinking which we are never allowed to interrogate.

For some Government ministers to behave in this way — to slap prohibitions on travel to France for baseless reasons and to threaten unexplained new restrictions — amounts to presumptuousness on an epic scale. Who on earth do they think they are?

Tim Alderslade, chief executive of Airlines UK, which represents the aviation industry, is right. ‘The EU must be looking at us in incredulity. We have totally squandered the vaccine dividend we had built up.’

Travellers have the right not to be treated like feckless children. The Government — which is given a virtual carte blanche by a supine Labour opposition — appears even to have forgotten what constitutes common decency.

People yearn for rational, transparent decisions from the Government. They want to know where they stand.

I hope that, presiding as he does at the centre of needless chaos, Boris Johnson will now listen to the Chancellor and exert some rational control over completely illogical travel restrictions.

Thank God for Rishi Sunak. I don’t know whether he will be, or should be, Prime Minister. I am just grateful that he displays a reassuringly analytical approach, and is prepared to stand up to Boris.

Looking at him, I no longer feel we are in a madhouse.