Swansong is a play-length monologue from Irish actor and playwright Conor McDermottroe. Performing it is no mean feat – and Andre de Vanny uses it as a springboard for a tour de force that no one who cares about acting could fail to admire.

We’re drawn into the story of Occi Byrne, illegitimate son of a single mother from the conservative west coast of Ireland. An outcast and a profoundly troubled young man, he battles his way through trauma and isolation, through a legacy of brutality and abuse, though not unscathed.

The suggestion of an acquired brain injury, amplified by social discrimination, triggers outbursts of impulsive rage that land him on the wrong side of the law. Occi finds himself committed to a secure mental health facility as an involuntary inpatient, before emerging into a less precarious state when he gets the help he needs. 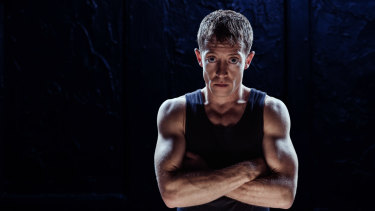 Stacks of charisma and a high degree of technical ability are required to sustain this kind of marginalised voice over 80 minutes and it’s a tribute to de Vanny’s talents – and to Greg Carroll’s direction – that, despite some overworked blarney in the writing, the production wrestles the text into an impressive histrionic feat that remains consistently compelling and alive.

De Vanny contrasts alarming aggression and piteous vulnerability to unnerving dramatic effect. It’s a protean incarnation of a damaged character, the sort of vehicle that wins Oscars. And if it makes no concession to easy listening – de Vanny’s Irish brogue throws itself into a voice of haunting ugliness, as grating and desperate as an accent renowned for its beauty could be – it’s also a performance limned by rambunctious charm, and offbeat humour.

Yet the intricacy and confidence of the acting doesn’t quite engage the emotions as much as you would hope. The lion’s share of blame for that lies with the script, which gets carried away with formulaic externalities, turning its gaze towards a picture postcard of Ireland, instead of fully navigating the rugged and forbidding interior landscape on show.

Still, this is such an intense, dynamic and technically assured performance it thoroughly deserves the standing ovations it receives.