SIMON WALTERS: In all my years at Westminster I’ve never seen No 10’s inner circle erupt into war so rapidly

The Oxford professor, physicist and philosopher Sir Roger Penrose was finally awarded a Nobel Prize last month 55 years after he proved there are black holes in space.

It has taken less than 55 weeks since the last election for proof to emerge that there is a gaping black hole at the heart of Boris Johnson’s Downing Street machine.

Lee Cain’s promotion had been dreamed up by his ally and fellow Brexit hardliner Dominic Cummings, who is Johnson’s senior Downing St adviser. Mr Cain is pictured left while Mr Cummings is pictured right

Lee Cain was his most loyal and longest-standing personal aide. He was expecting to be promoted to Johnson’s chief of staff at No 10.

But Johnson’s partner Carrie Symonds was so aghast at the plan when it emerged this week that she joined a revolt by ministers, MPs and officials to stop it. And Cain walked out.

His promotion had been dreamed up by his ally and fellow Brexit hardliner Dominic Cummings, who is Johnson’s senior Downing St adviser. Also involved was Cabinet Secretary Simon Case, a former royal aide who has only been in the job since September.

Inside No 10, this trio — Cain, Cummings and Case — had formed themselves into a powerful axis, styling themselves ‘the three Cs’. So powerful, indeed, that no one could get to see Johnson without their say so.

Inside No 10, this trio — Cain, Cummings and Simon Case (above) — had formed themselves into a powerful axis, styling themselves ‘the three Cs

Even the Home Secretary Priti Patel had the No 10 door slammed metaphorically in her face by Cain, a former tabloid journalist who’s most notable role on the Mirror newspaper was to dress up as a chicken and taunt David Cameron during the 2010 election campaign.

The truth is the notion of Cain becoming chief of staff in Downing Street was always far-fetched.

Few believed Cain was genuinely qualified to do the job. After all, he is a high-powered bruiser rather than a power broker.

In terms of diplomatic skills he is not on the same planet as someone like Tony Blair’s chief of staff Jonathan Powell, who more or less single-handedly brought about the Good Friday Agreement in Northern Ireland.

No, ‘the three Cs’ had decided Cain should be given the highly coveted job with its grand title as a sop — simply because he was in a sulk.

His nose was out of joint because Johnson had appointed the former BBC journalist Allegra Stratton as a new White-House style TV spokeswoman for No 10 — against Cain’s advice. In fact, he has been so put out over her appointment that, incredibly, he and Stratton have not even spoken to each other since she started work at Downing Street a fortnight ago.

The answer, believed the ‘three Cs’, was to persuade Johnson to give Cain the chief-of-staff job. They were convinced the PM would do what they told him. But they had failed to reckon with a fourth ‘C’ — Carrie Symonds.

Miss Symonds, 32, has been a formidable campaigner since becoming a Tory Party press officer in her 20s. And though she has been less vocal after the birth of her and Mr Johnson’s first child Wilfred in April, there are clear signs she is ready to resume a wider role.

The first indication came two weeks ago when the couple made their first joint TV appearance to thank NHS staff for delivering Wilfred and saving the Prime Minister’s life when he had Covid. Now, she has teamed up with Miss Stratton to strike back at the ‘macho culture’ in No 10 that is blamed on the ‘three Cs’.

Cummings famously had a young female Tory aide frogmarched out of No 10 by armed police when he accused her of leaking to the Press.

And Miss Symonds is said to disapprove of the aggressive style of Cain, who is derided by critics as ‘Dom’s henchman’. Supported by Munira Mirza, the head of the No 10 policy unit, the three women prevailed over ‘the three Cs’ and managed to block Cain’s appointment.

Power struggles in Downing Street ‘kitchen cabinets’ are nothing new. But they usually occur when a government is running out of steam. Never in my years reporting on Westminster have I seen the inner circle in No 10 descend into internecine warfare so rapidly.

The manner in which the Downing Street meltdown erupted was all the more shameful for the fact it did so on the day Covid deaths passed 50,000. 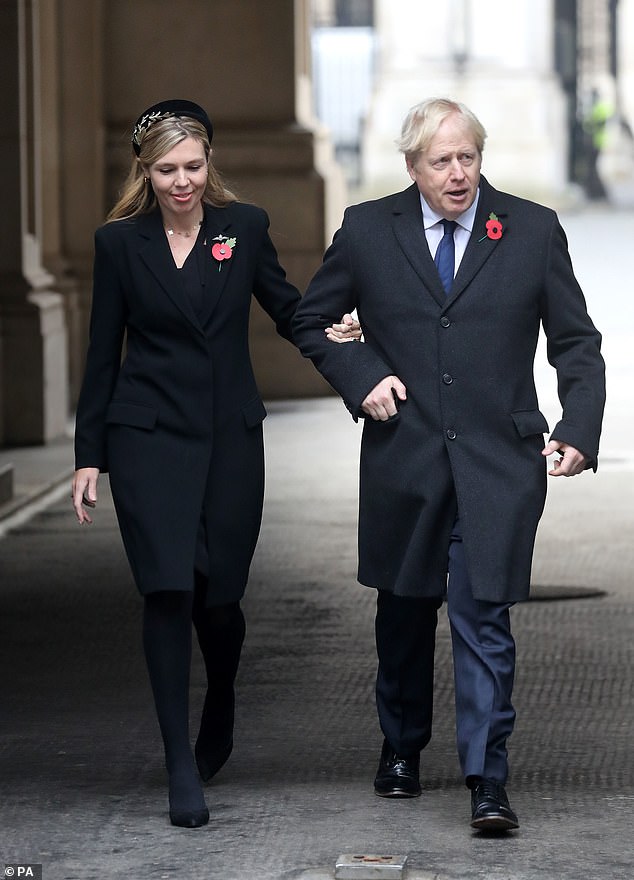 Miss Symonds is said to disapprove of the aggressive style of Cain, who is derided by critics as ‘Dom’s henchman’. Supported by Munira Mirza, the head of the No 10 policy unit, the three women prevailed over ‘the three Cs’ and managed to block Cain’s appointment

Some of the blame must attach to Simon Case. Most Cabinet Secretaries would not tolerate such petty and poisonous political infighting.

They are there to keep the calm, to make sure the public interest comes first and that politicians and their apparatchiks play by the rules.

But Case is not that kind of Cabinet Secretary. Many mandarins were dismayed when Johnson chose him to replace Sir Mark Sedwill in September.

Case, 41, is a pale shadow of the towering figures to have headed the civil service in the past, such as Lord Armstrong in the 1980s and Lord Butler in the 1990s. Armstrong stood up to Margaret Thatcher; Butler argued with Blair.

Case, however, was reluctant to stand up even to Cain, never mind Johnson or the ferocious Cummings.

Case, whose previous most high-profile position was as a glorified bag carrier — or private secretary — to Prince William, was chosen precisely because he is no Armstrong or Butler.

Cummings wants to rip the Civil Service to bits; he has warned that a ‘hard rain’ is going to fall on it, and advertised for ‘weirdos and misfits’ to take over from Britain’s traditional Sir Humphrey-style bureaucrats.

The last thing Cummings wants is a civil servant with the class and clout to stand up to him — or Cain.

The general view in Whitehall is that Case got the job by inveigling himself with Cummings and Cain.

If the aim was to ensure they had more power than the rest of the Cabinet and controlled the lock and key to Johnson’s door, it has been a success.

If it was to make sure Downing Street was organised, the Government had a clear message, the country was governed properly and beat the pandemic without personal and political squabbles getting in the way, it has been a disaster.

Cummings has surrounded himself in No 10 with the Vote Leave team who helped him win the EU referendum in 2016. But some ministers complain they are like a ‘sect’ and the fanatical campaigning skills that worked in the referendum do not translate into good government.

Miss Stratton now wants Boris Johnson to ‘re-set’ his Government and use her platform as his TV spokeswoman to herald a new spirit of openness and efficiency.

All well and good in theory.

But a ‘re-set’ will not impress voters if it means replacing one set of cronies with another, particularly when the main claim to prominence of one of the new bunch is she happens to be the PM’s partner.

Regardless of whether Cain was fit to be Downing Street’s chief of staff, many will be outraged that the plan was blocked not by a Cabinet Minister or senior Tory MP, but by Miss Symonds, who outranked the Cabinet Secretary in the process.

Professor Penrose showed that black holes are so dense and destructive no light can escape from them; eventually they run out of fuel and collapse. If Boris Johnson does not fill the black hole in No 10, he risks a similar fate.