Seven has accused Nine of being “desperate” and “misleading” as both broadcasters claimed victory as the 2022 television ratings year came to a fiery and confusing end at midnight on Saturday.

Ten, meanwhile, has finished with a smaller share of the free-to-air audience than the ABC, despite having the number one new show of the year. 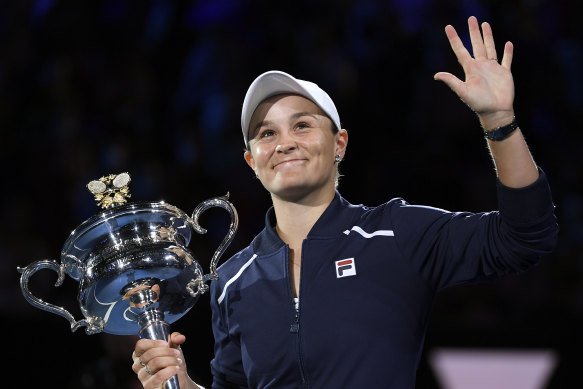 The presentation ceremony after Ash Barty’s victory in the Australian Open women’s final was the most-watched TV event of the year. Credit:AP

According to the market share figures released by Seven, it claimed 30.3 per cent of the all-broadcaster national free-to-air audience across its network – primary channel and multi-channels combined – compared to 27.8 per cent for Nine.

In the all-important metro market (the five mainland capital cities), Seven had 29.2 per cent share to Nine’s 28.8.

It’s a slender lead, but critical in terms of claiming bragging rights and setting the rate card for next year’s advertising – which is, after all, the only reason the ratings exist.

But Nine (which owns masthead) had a rather different take on the numbers.

While it conceded defeat to Seven in the 40-week survey year by a squeak (28.6 per cent to Seven’s 29), it claimed to have won the whole calendar year by exactly the same margin (and the same shares, flipped).

It also claimed to have won the primary channel battle and all key demographics (the market segments that are sold to advertisers, and are key in the ratings and revenue equation). 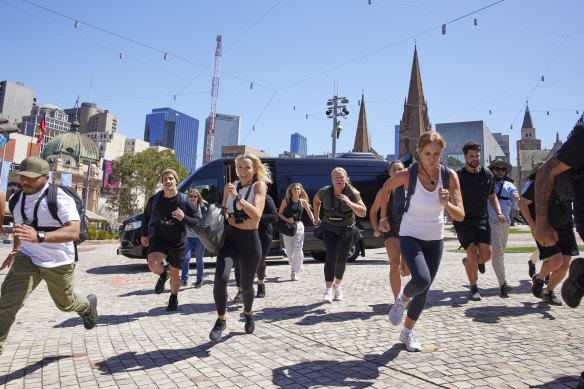 Off to a blistering start: Ten’s Hunted was the most successful new show of the year.

“It doesn’t matter how you want to look at it or how you want to cut the numbers, for the fourth year in a row Nine is the undisputed leader,” said the network’s chief sales officer, Michael Stephenson.

That claim drew an angry response from its rival.

“Seven is disappointed to read a number of false and misleading statements by Nine in its 2022 survey year ratings report,” the company said in a statement.

“Nine can rightfully lay claim to winning the demographics in metropolitan markets, but it is not the most-watched or the number one network. Those positions were won by Seven.

“While we all enjoy healthy competition in a hard-fought ratings race, Nine’s claims are desperate, misleading and wrong.”

While amusing or simply baffling to outsiders, the dispute over the numbers highlights both their importance – each rating point is worth $21 million, Warburton told this masthead last year – and the degree to which the local market continues to evolve at sometimes dizzying pace.

Above all, it shows, despite claims to the contrary, that how you cut those numbers makes an enormous difference.

Seven can rightly claim to be “Australia’s most-watched network”, but it is folding regional and metro markets together – and that, Nine sources insist, is in breach of the long-standing tradition in reporting the ratings results.

“While it’s acceptable to fold the markets together when reporting the top programs of the year, it has all always been about the metro markets,” a network spokesperson said. “It’s there in the definition of what OzTam is for and does.” 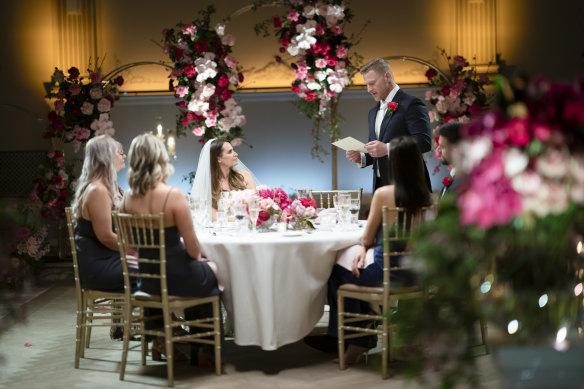 The fabricated romance of Married at First Sight continues to appeal to viewers. Credit:Nine

OzTam is the agency that collects and releases ratings data. While jointly owned by Seven, Nine and Ten, it operates independently of the broadcasters. The ABC, SBS and the pay TV operators have “observer” status.

Seven’s Warburton has been pushing for a shift in how ratings are reported for the past couple of years, leading the charge towards a national figure that includes regional markets (plus catch-up and BVOD), and insisting that overnight numbers are now irrelevant and metro just part of the picture.

Seven also has legitimate claims to being a true national broadcaster after its purchase of Prime in late 2021. But whether it can unilaterally change the ratings conversation in the wake of that is another matter.

Nine’s claim to have won the (calendar) year, meanwhile, is similarly legitimate but built on a breach of convention.

The summer weeks – where Nine dominates with its Australian Open coverage – have traditionally been excluded from the ratings. But with that period including its five biggest results of the year, and TV’s two biggest audiences – 4.128 million for the women’s final presentation and 3.835 million for the match in which Ash Barty defeated Danielle Collins to become the first local to win an Australian Open tennis title at home since 1978 – the network is understandably keen to factor it in.

Nine did win the primary channel battle in the cities – edging Seven by 20.6 per cent to 20.3 – and has the year’s top non-sport program, by some margin.

While few of its relationships have gone the distance, Married at First Sight continues to hold a place in the hearts of Australian viewers, with its ninth season attracting an average 1.996 million viewers per episode.

In a year short on victories, Ten could at least claim to have found a winner with its reality chase format Hunted. With an average audience of 1.13 million viewers, it was the biggest new show of 2022. Its finale of Neighbours – which has since been revived in partnership with Amazon – was watched by 1.294 million people.

SBS saved its best for last, winning the final night of the year’s ratings period with its coverage of the Australia vs Tunisia game at the FIFA World Cup. The match drew an audience of 1.34 million overnight viewers. The tournament as a whole has given it its best week of the year, lifting it to a prime time share of between 16.5 and 29.2 per cent across the past five days.

Outside the World Cup, its best performer was Who Do You Think You Are?, which averaged 536,000 viewers across its eight episodes.

The ABC’s most-watched single broadcast of the year was its coverage of the federal election, which drew 1.89 million viewers in the late evening section of the night, while its coverage of the funeral of the Queen drew 1.686 million viewers. Among its regular programs, Hard Quiz, Spicks and Specks, Australian Story and the English crime dramas Vera and Doc Martin were the standout performers.

Bluey, though, outran them all, averaging 1.989 million views per episode, making it the third-most-watched non-sports program of the year across all networks.