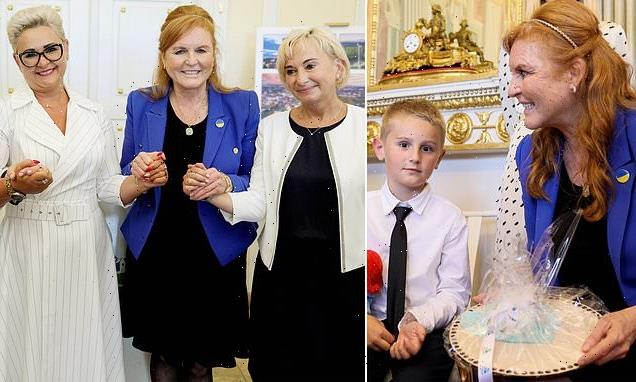 The Duchess of York was back in Poland today, making her third visit to the country since war broke out with Russia in neighbouring Ukraine.

Today, Ferguson, 62, spent time at Mieroszewski Palace in Bedzin, a city in southern Poland, chatting to families who’ve fled the Ukrainian city of Obukhov, which is twinned with Bedzin.

Wearing a royal blue jacket, with a Ukrainian badge pinned to it, the Duchess chatted to dignitaries from Bedzin, as well as greeting children and babies from war torn Obukhov. 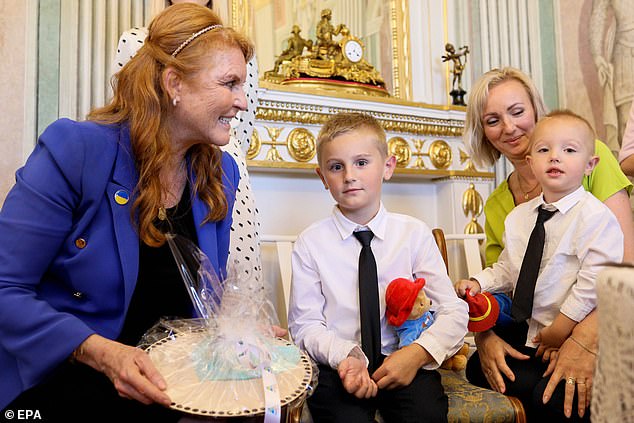 The Duchess of York pictured at Mieroszewski Palace in Bedzin, southern Poland, on Wednesday as she chatted to young refugees from the Ukrainian city of Obukhov, a partner city of Bedzin 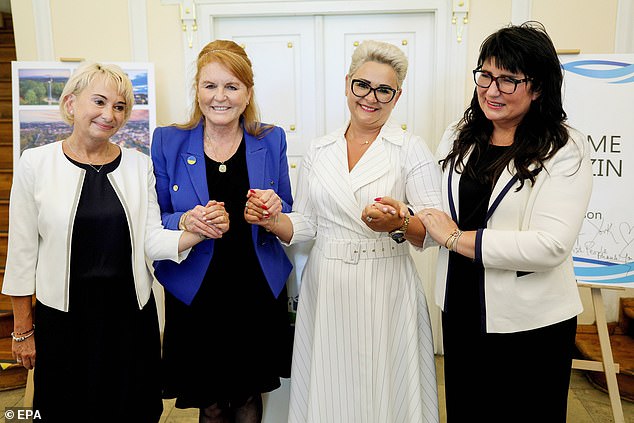 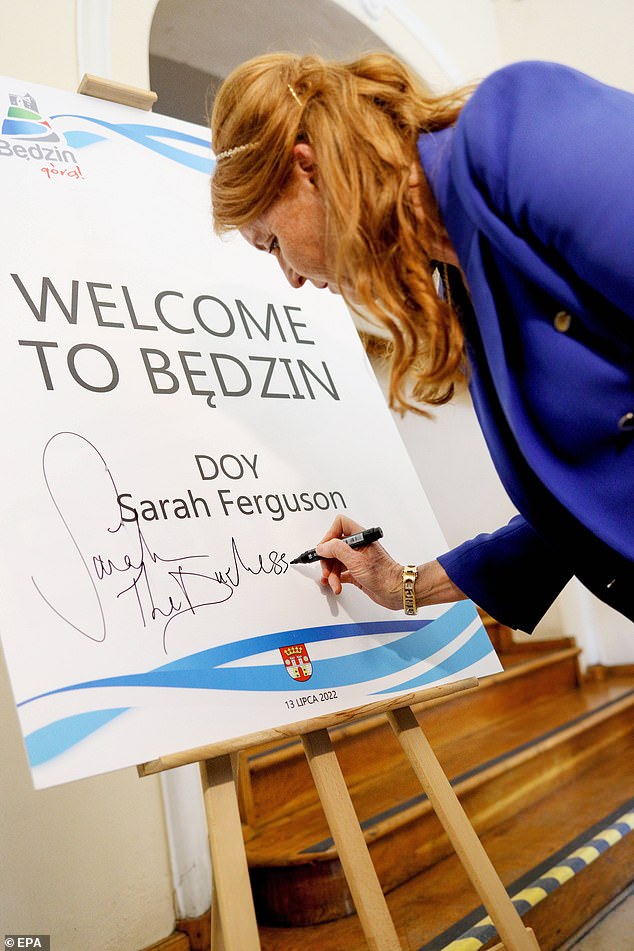 In March, Prince Andrew’s ex wife, who is grandmother to Princess Eugenie’s son August, one and Princess Beatrice’s daughter Sienna, born in September, became the first member of the extended royal family to travel to Poland to meet Ukrainian refugees.

Her charity, Sarah’s Trust sent three articulated lorries with supplies to Poland, and she travelled to Warsaw where she was welcomed by Mayor Rafał Kazimierz Trzaskowski, to find out ‘what more we can do’.

Fergie, who earlier this year returned to her online show Story time With Fergie and Friends to show support to the children of Ukraine, was pictured embracing and comforting young people and their families who have escaped the invasion. 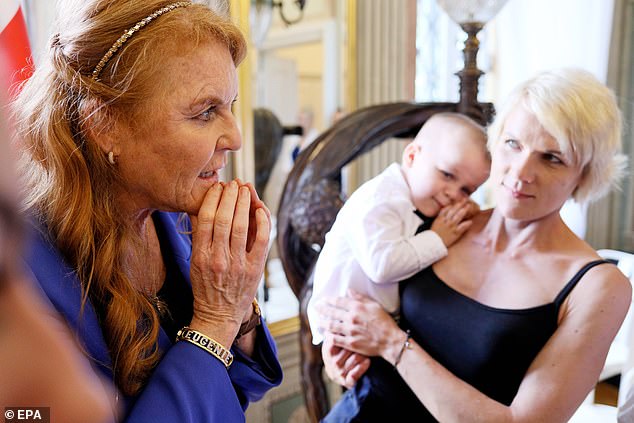 In March, Sarah became the first member of the extended royal family to travel to Poland to meet Ukrainian refugees 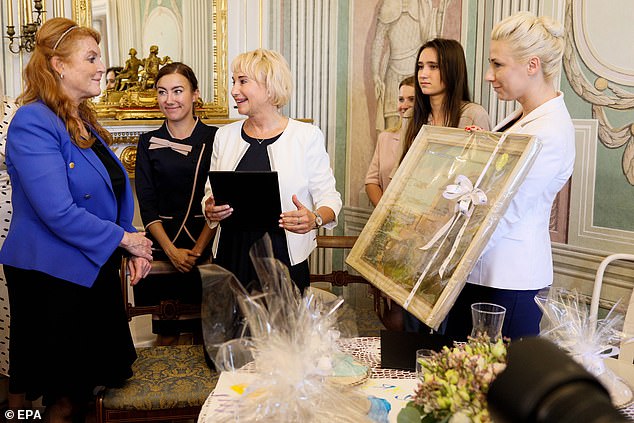 At the time, she told her 365,000 Instagram followers: ‘I have always believed the smile of a child is the most important thing in the world, so to see so many children caught up in this crisis is particularly affecting.’

She added: ‘It is a privilege to meet some of them and hear their stories today. The world has a duty to support them.’ 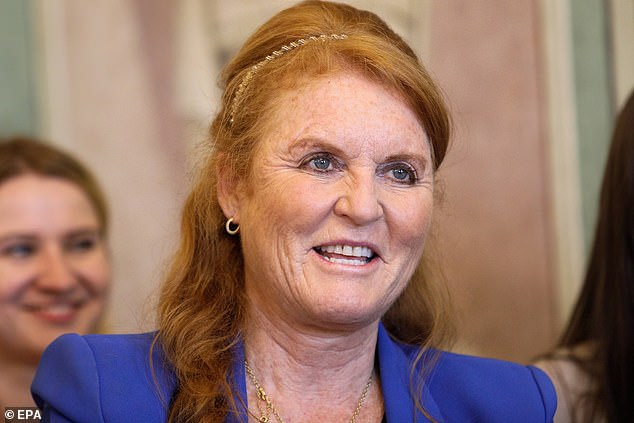 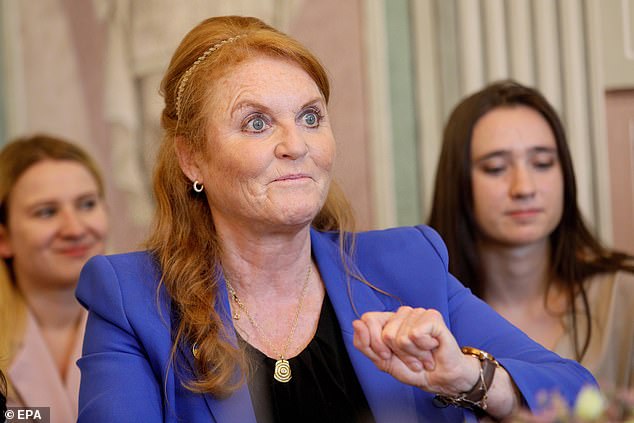 Back in the UK, the Duchess’ oldest daughter, Princess Beatrice, cut a chic figure last night as she headed out for a double date night with her husband Edoardo Mapelli Mozzi at an exclusive member’s club in Mayfair.

The daughter of Prince Andrew and Ferguson, 33, was all smiles as she joined her husband Edoardo Mapelli Mozzi, 38, at Oswald’s in London yesterday after enjoying a night on the town.

The couple were joined by Meghan Markle’s BFF Misha Nonoo and her billionaire oil heir husband Mikey Hess at the exclusive club.