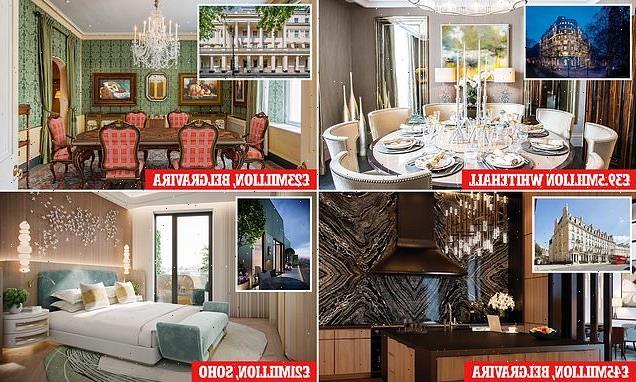 London’s billionaire property boom: Sales of super-prime housing DOUBLED in 2021 while rich buyer market will be driven by Russian and Chinese buyers in 2022, agents say

While the last year has seen many of us scaling back on our spending – the super-rich spent 2021 snapping up super-prime property worth millions in the country’s capital.

The number of multi-millionaire and billionaire buyers in central London doubled in size during 2021 – with the super rich buyer market expected to boom in 2022, according to Beauchamp Estates.

The luxury property agency’s Billionaire Buyers in London survey revealed that 49 properties priced over £15 million sold in the city last year, compared to 17 sales in 2020, with the number of mega mansions sold this year only set to increase.

London’s super-prime housing market was primarily driven by Chinese and Russian buyers this year, with the latter predicted to surpass China as the main market for homes priced above £15 million in the city’s capital in 2022.

The surge in London’s billionaire property deals is thought to be because of an accumulation of wealth in the last 12 months and interest-only ‘billionaire mortgages’, which have triggered a massive ‘buying spree’ of luxury London homes. 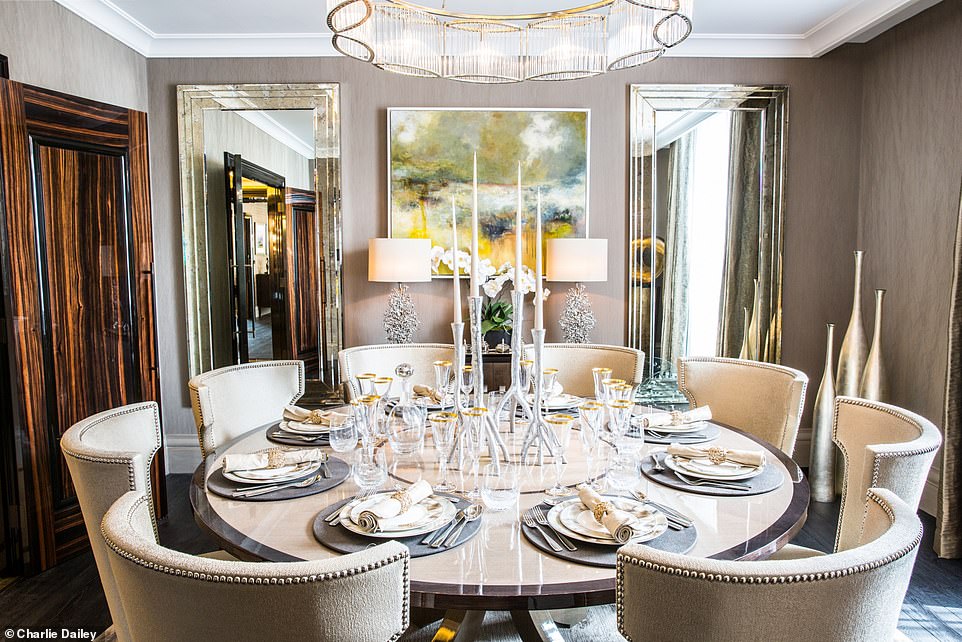 The number of multi-millionaire and billionaire buyers in central London doubled in size during 2021 – with the super rich buyer market expected to boom in 2022. Pictured, the lavishly appointed eight-seat dining room of the four-bedroom penthouse in the Corinthia purchased this year 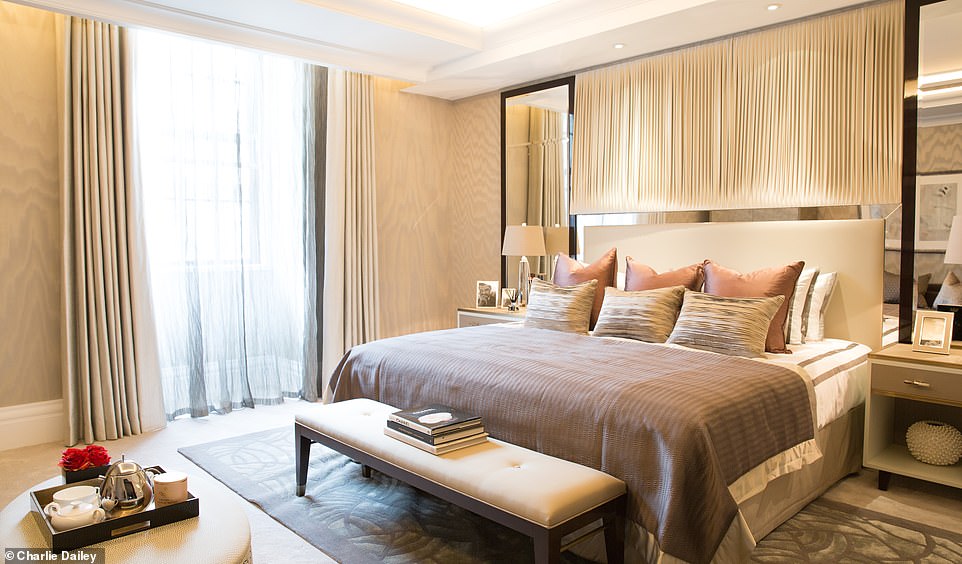 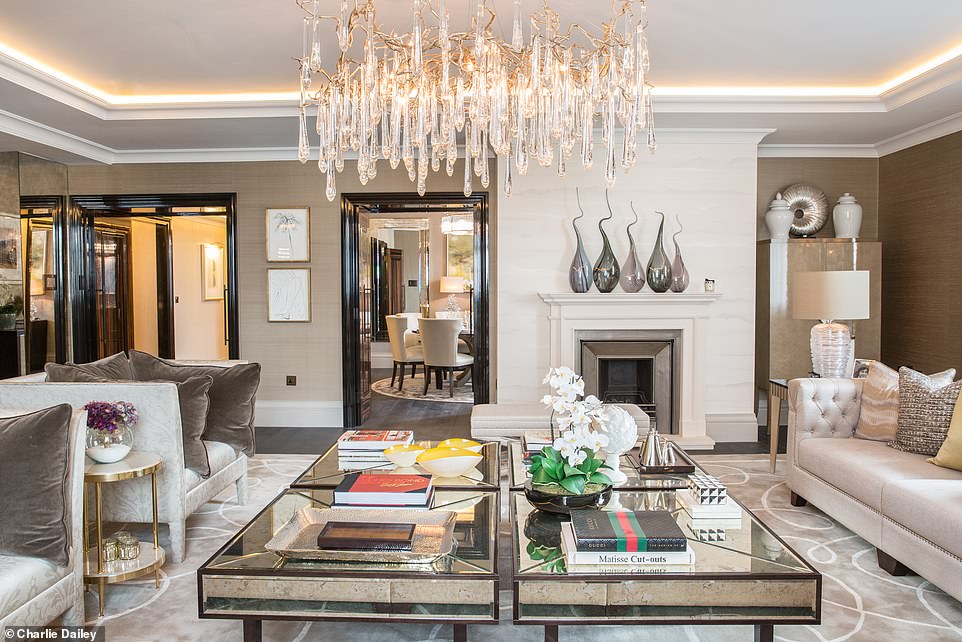 The main reception room, seen above, boasts neutral colours and a shimmering crystal chandelier, as well as large windows to bathe the area in natural light 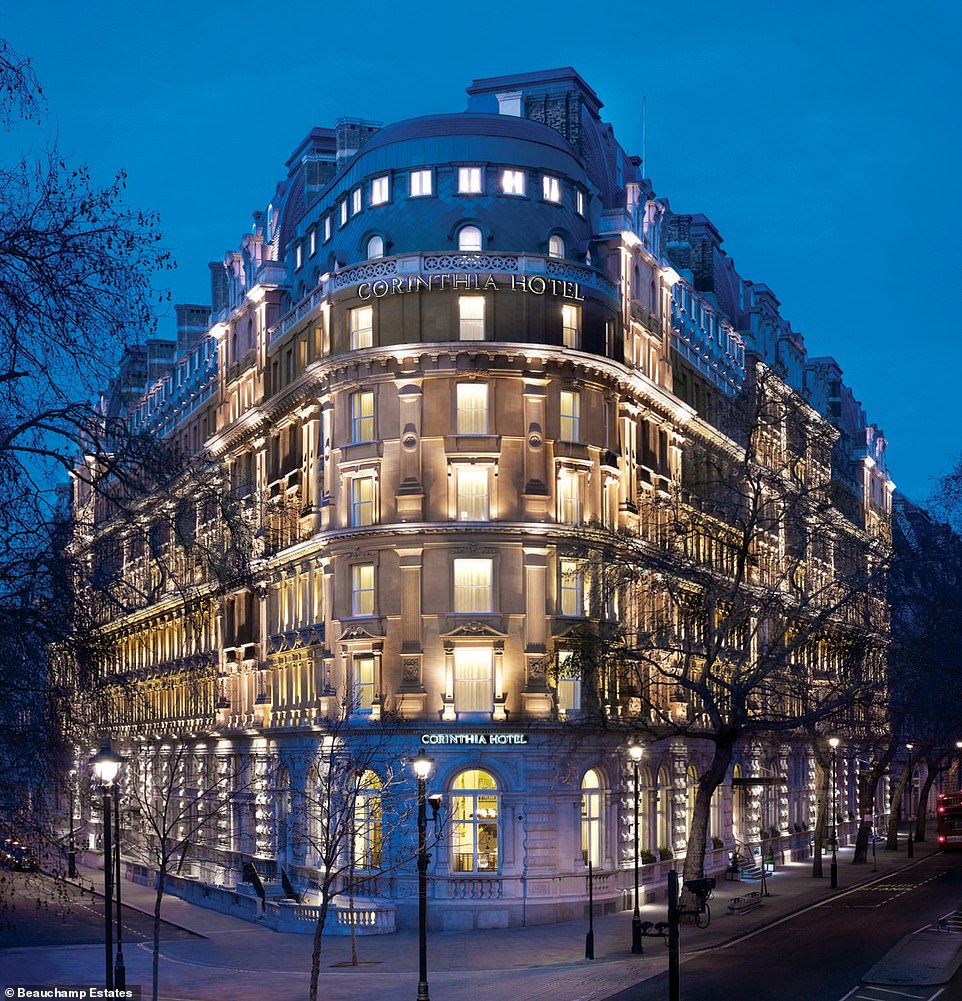 The buyer said to have paid £39.5 million to purchase a four bedroom duplex in the Old War Office and a penthouse at the Corinthia Hotel Private Residences. Pictured, the residence’s exterior

In 2021, billionaires became younger, meaning those buying trophy houses and penthouses in London were less concerned about their postcode – with properties in Notting Hill becoming increasingly popular.

When it came to specifications for properties, buyers were after mansions and grand townhouses providing no less than 10,000 sqft of living space, complete with gardens.

Here, FEMAIL reveals how the super-rich purchased property in 2021 and the trends predicted to take over the prime property market this year.

Other significant buyers include multi-millionaires and billionaires from Nigeria and South Africa.

Prices on super-prime properties priced above £15 million in London are expected to rise by 5 per cent to 7 per cent.

The volume of deals for luxury homes has the potential to double again, with around half a dozen homes valued at up to £100 million scheduled to be listed for sale during 2022.

Russian buyers are likely to leapfrog up the rankings and overtake the Chinese as the lead buyers of super-prime homes in London.

LONDON’S SUPER-RICH ARE GETTING YOUNGER

According to Beauchamp Estates, around 40 per cent of London’s multi-millionaire and billionaire buyers in London are self-made whilst the rest benefit from family or inherited wealth. 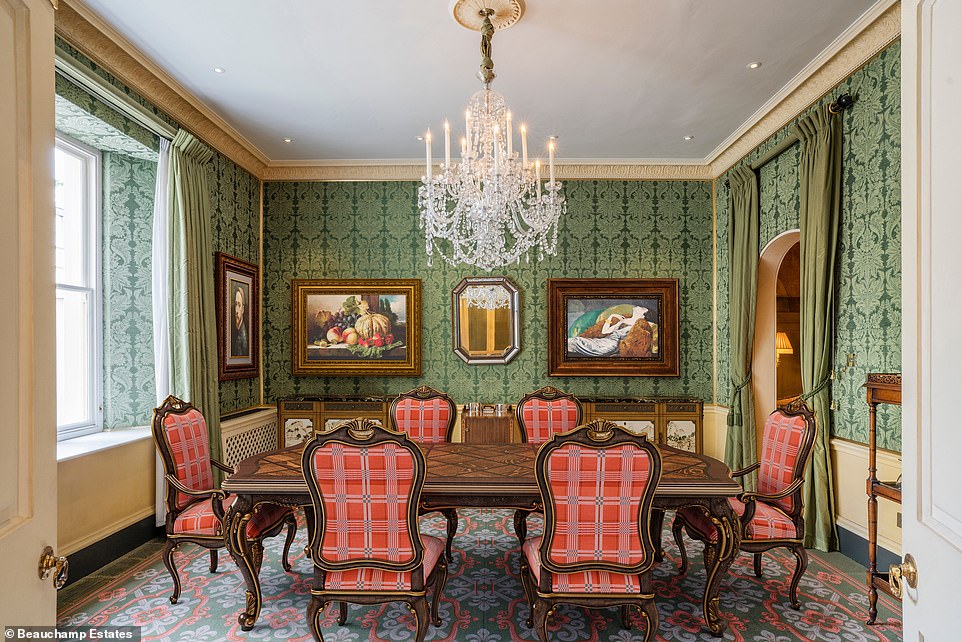 Grade II-listed Belgravia property that was once home to Prime Ministers Stanley Baldwin and Margaret Thatcher was sold for £23million this year. Pictured, the dining room where politicians and royalty have been entertained 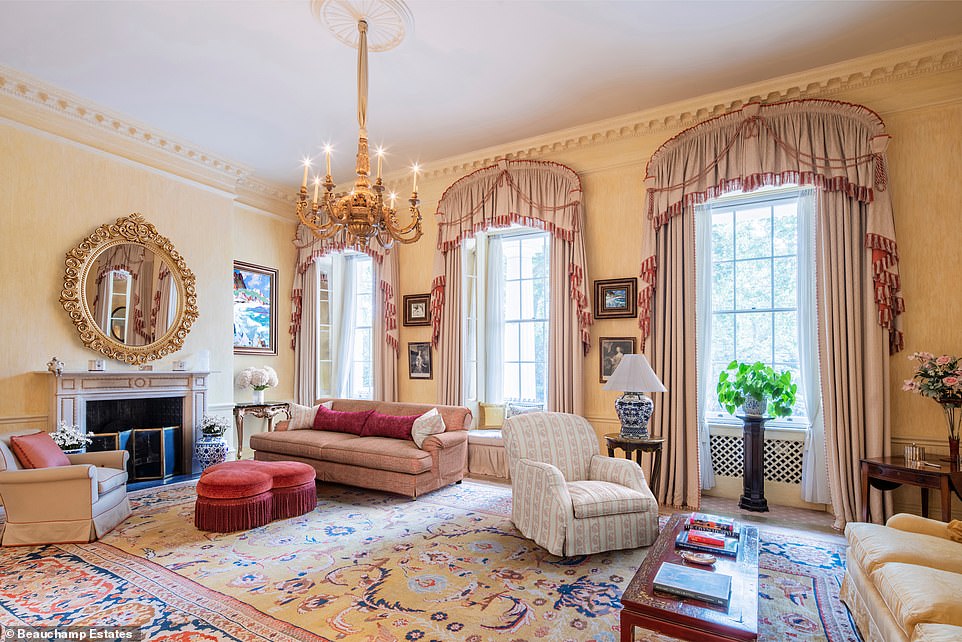 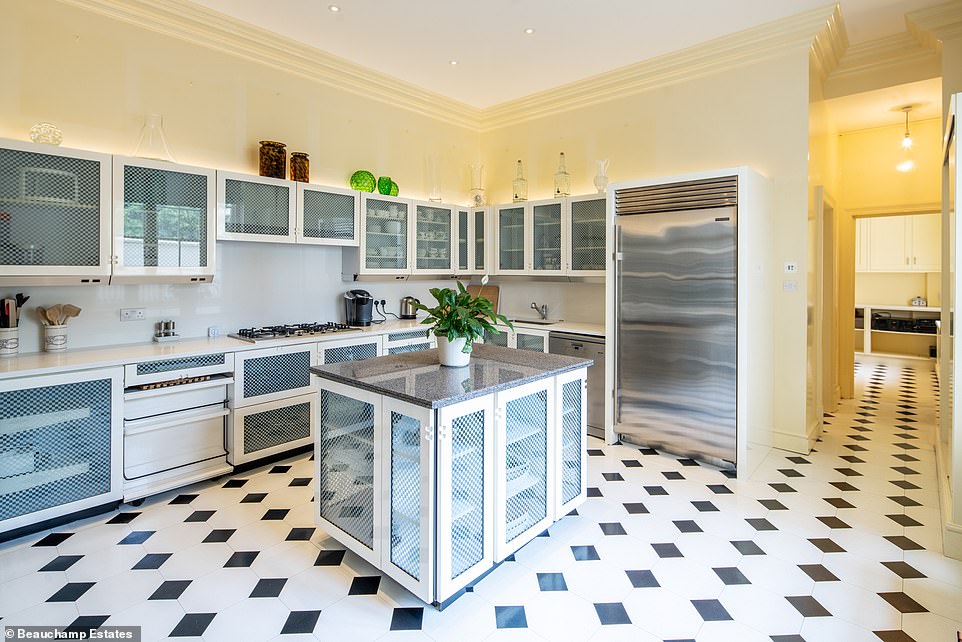 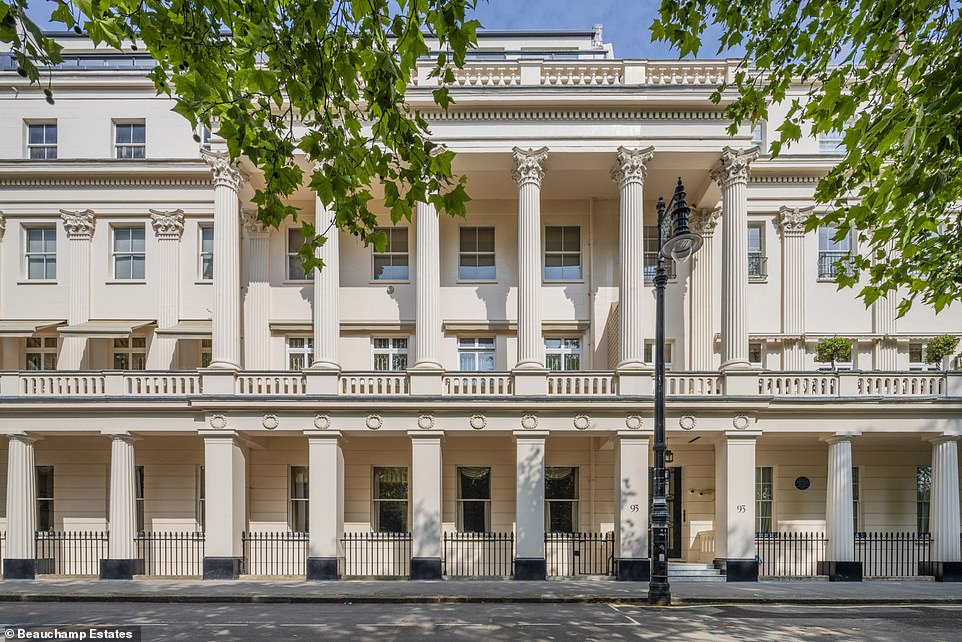 Built in the 1820s, Eaton Square, is largest private garden square and is encircled by a terrace of grand residences designed in classical style with projecting Doric colonnade and porches

Over the last two years those buying prime London property are getting younger, with many of the buyers for £15 million plus properties being in their late 20s or early 30s.

According to the real estate company the UK’s relatively low interest rates have enabled most of London’s super-prime property deals over the last two years to be transacted using asset-backed ‘billionaire mortgages’.

Using other assets or company shares as collateral, these ‘billionaire mortgages’ are typically 30-year term interest-only mortgages, with a preferential 1 per cent to 2.5 per cent interest rate, often up to 100 per cent of the value of the property.

These terms result in the mortgages not having to be paid-off unless the home is sold, or if the property is inherited the next generation can enjoy a comparable loan. The money saved can then be used for other investment opportunities.

This new generation of wealthy buyers are far less fussy about where in London their property is located, meaning several of them bought homes outside of the traditional Knightsbridge, Belgravia and Mayfair addresses.

Jeremy Gee, Managing Director of Beauchamp Estates said: ‘The multi-millionaires and billionaires buying trophy houses and penthouses in London are getting younger and have self made wealth.

‘This new generation of super rich buyers, many in their 20s and early 30s, want value-for-money alongside luxury and because they are not postcode snobs are happy to purchase beyond the boundaries of SW1 and W1.’

KNIGHTSBRIDGE AND BELGRAVIA ARE THE PLACES TO BE

Over the last two years the SW1 postcode, specifically Knightsbridge and Belgravia, has remained London’s most popular address for the uber-rich, closely followed by Mayfair.

For the younger generation of wealthy buyers, Notting Hill has become a key location with prime property being purchased in addresses such as Elgin Crescent, Clarendon Road and Kensington Park Road.

Another emerging location for super-rich buyers is Bayswater overlooking Hyde Park, where a young Russian billionaire recently purchased a £40 million mansion for over £5,000 per sqft.

Whitehall has also had a flurry of deals, with a buyer said to have paid £39.5 million to purchase a four bedroom duplex in the Old War Office and a penthouse at the Corinthia Hotel Private Residences.

Over the last year super-rich buyers were after large houses providing no less than 10,000 sq ft of living space, and in some cases upwards of 30,000 sq ft of accommodation.

Penthouse deals have also risen, with nine £15 million plus deals in 2021, compared to six in 2020 – with the penthouse an average of 6,128 sq ft with four bedrooms and large private balconies and terraces.

A London billionaire’s house was on average 9,384 sqft in size, with seven bedrooms, a private cinema, health spa, swimming pool and generous garden.

The average prime property sold last year cost £3,221 per sqft with the highest hitting a reported record £11,000 per sqft. 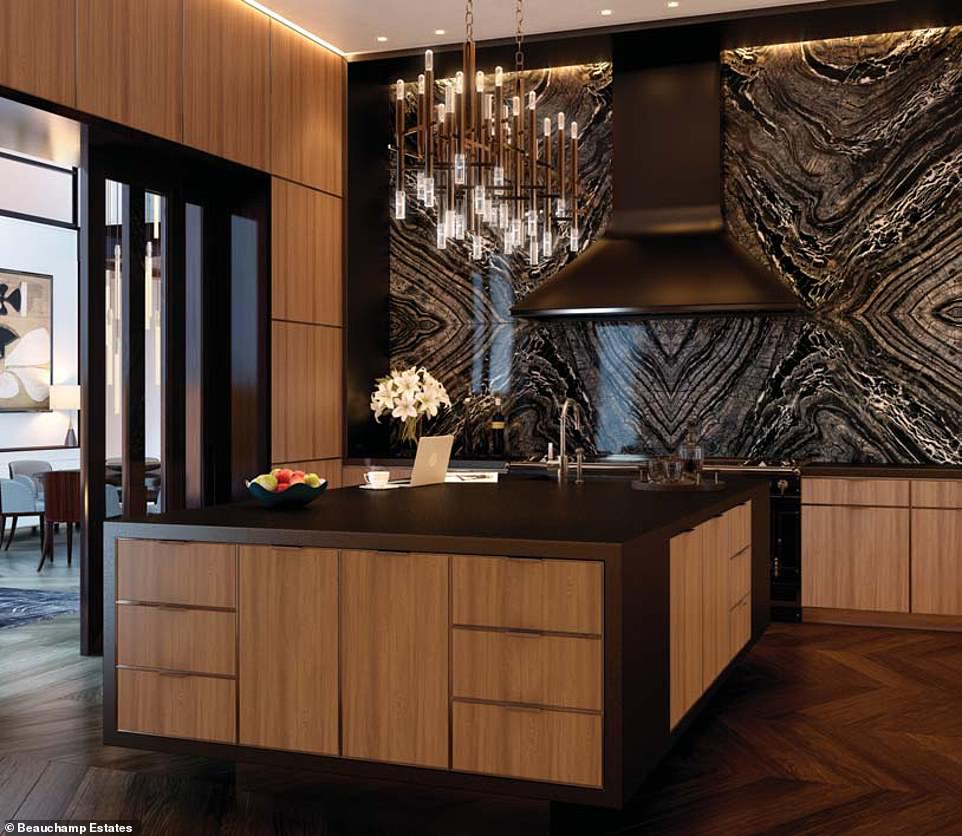 The SW1 postcode, specifically Knightsbridge and Belgravia, has remained London’s most popular address for the uber-rich. Pictured, an uber-chic development in Belgravia Gate 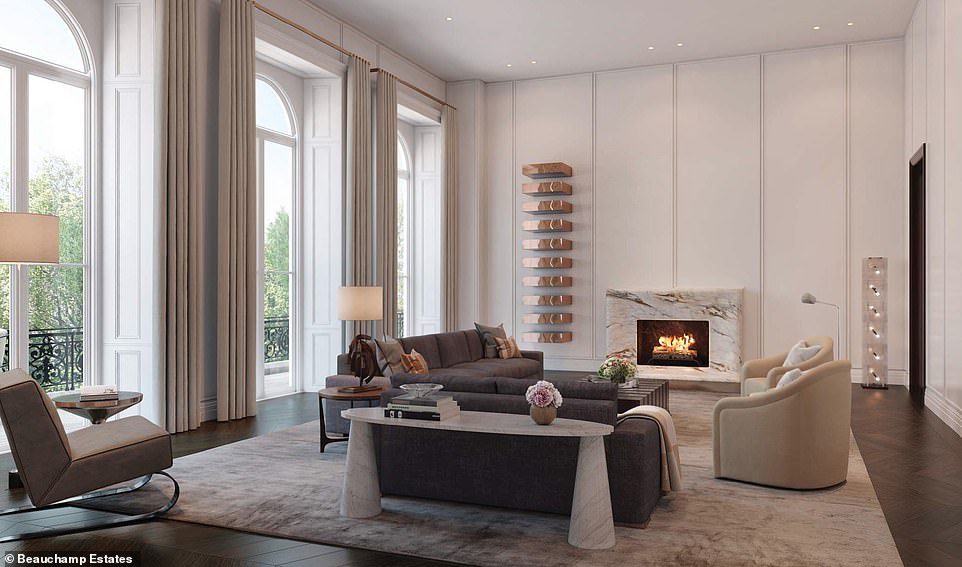 The Grosvenor Crescent townhouse was purchased by Hong Kong billionaire for £45 million this year. Pictured, the sleek fittings inside the home’s reception room. Each apartment has been built on the scale of a large private home 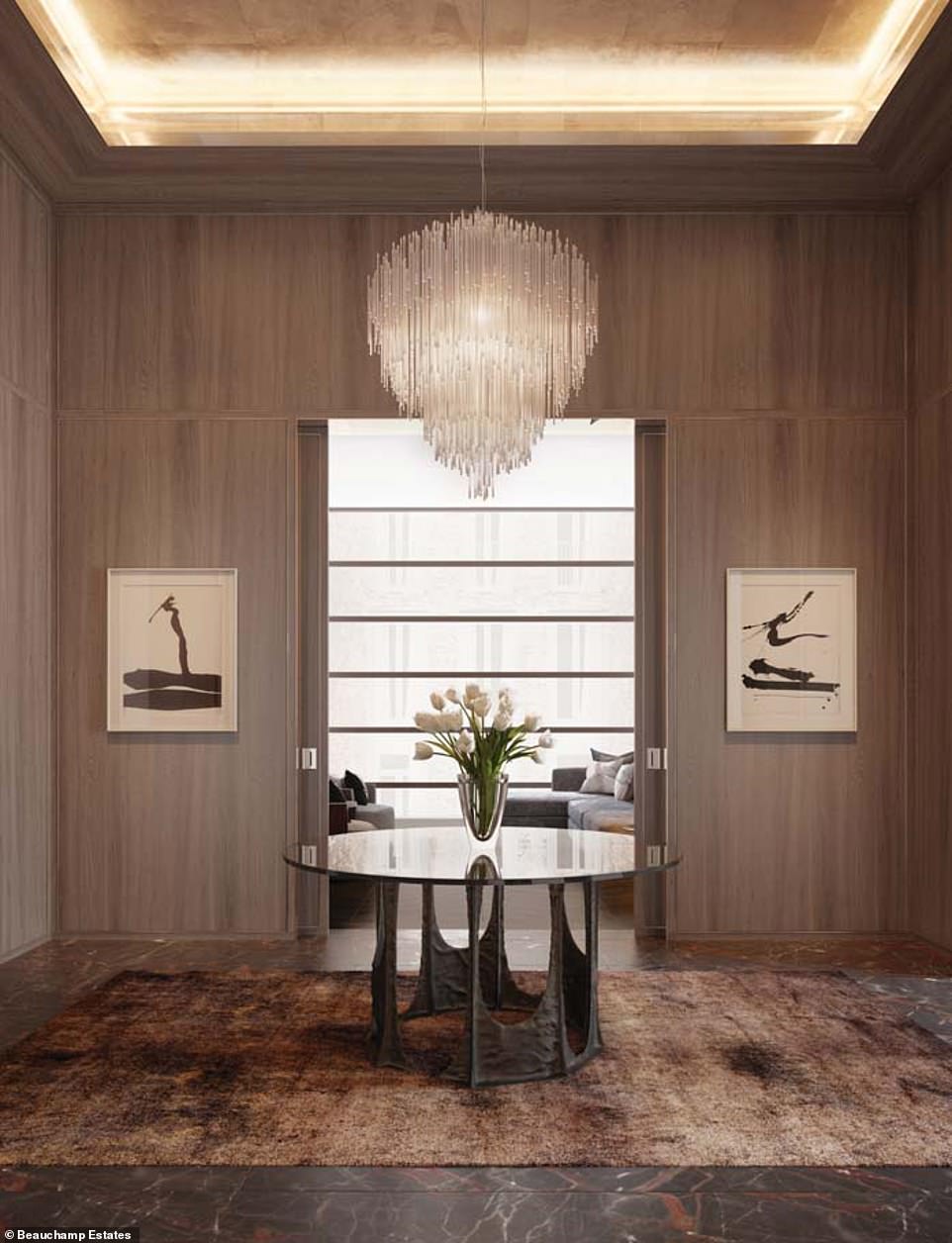 In keeping with the grand heritage of the buildings, architectural proportions are lavish, with 3m and, in some cases, 4m-high ceilings and a wealth of beautifully restored original features 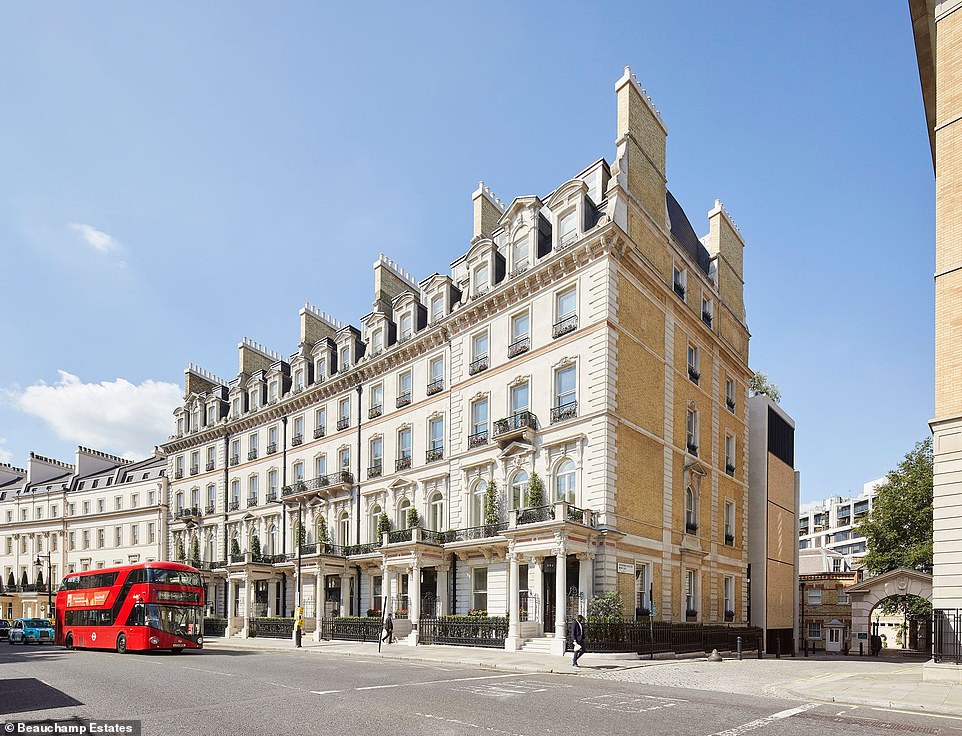 Belgravia Gate is one of the most desirable addresses in London with residences created from five 19th-century townhouses, built by the legendary master builder Thomas Cundy III and renovated by Thomas Juul-Hansen. 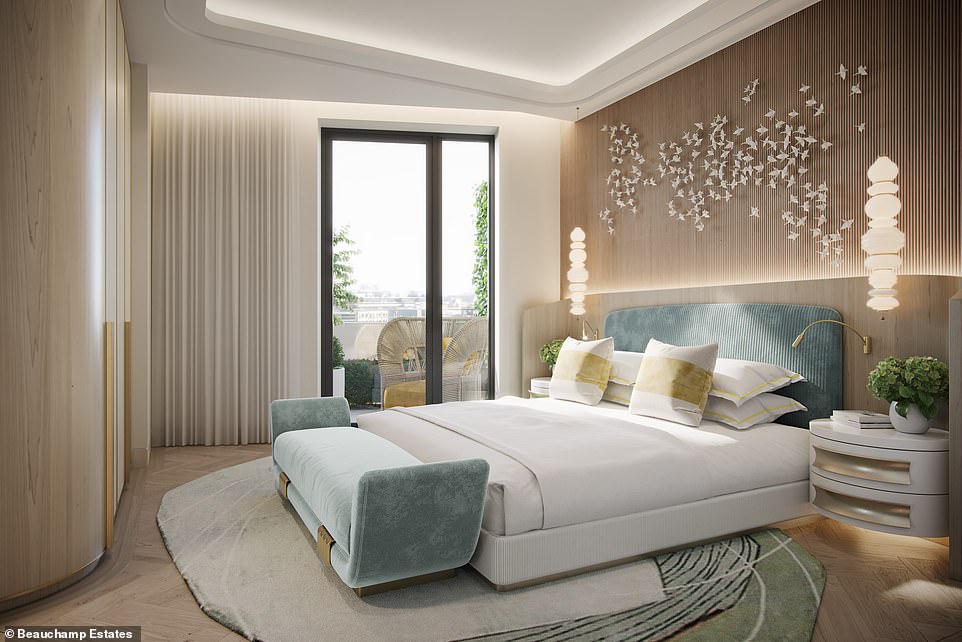 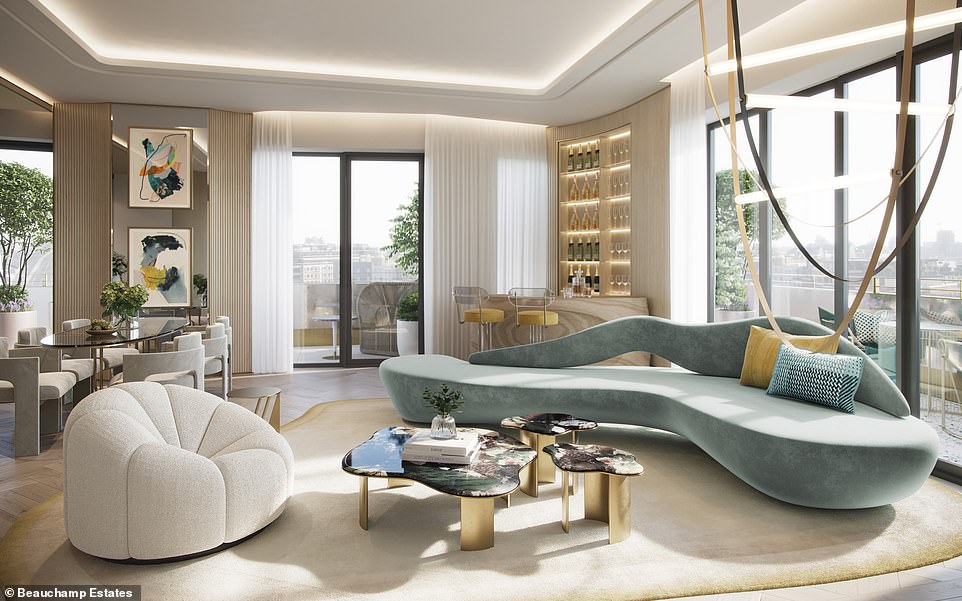 A view of a living area within a penthouse inside TCRW SOHO with a bespoke entertainment unit is equipped with an OLED Smart TV, lavish modern furnishings and a balcony with views stretching across London 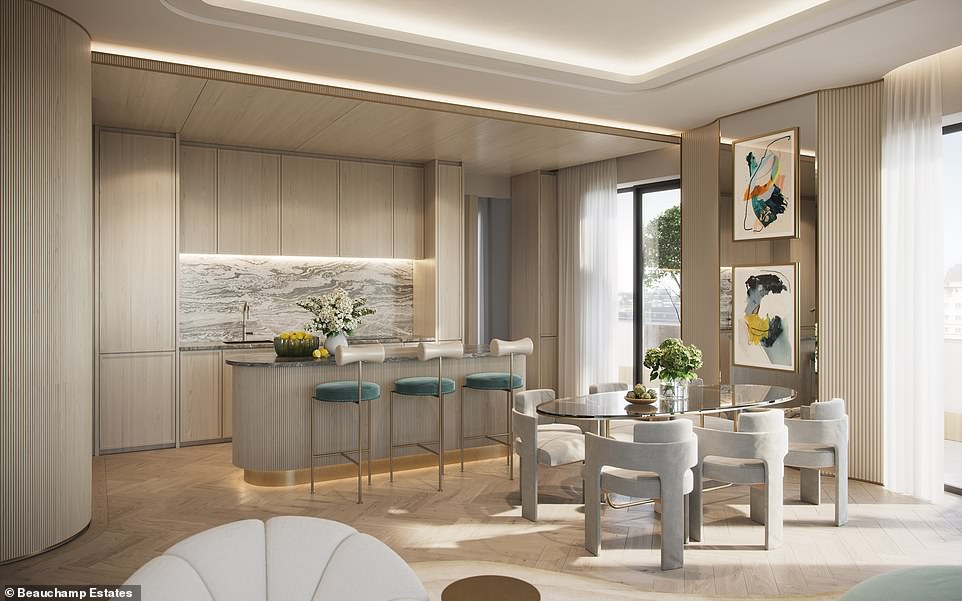 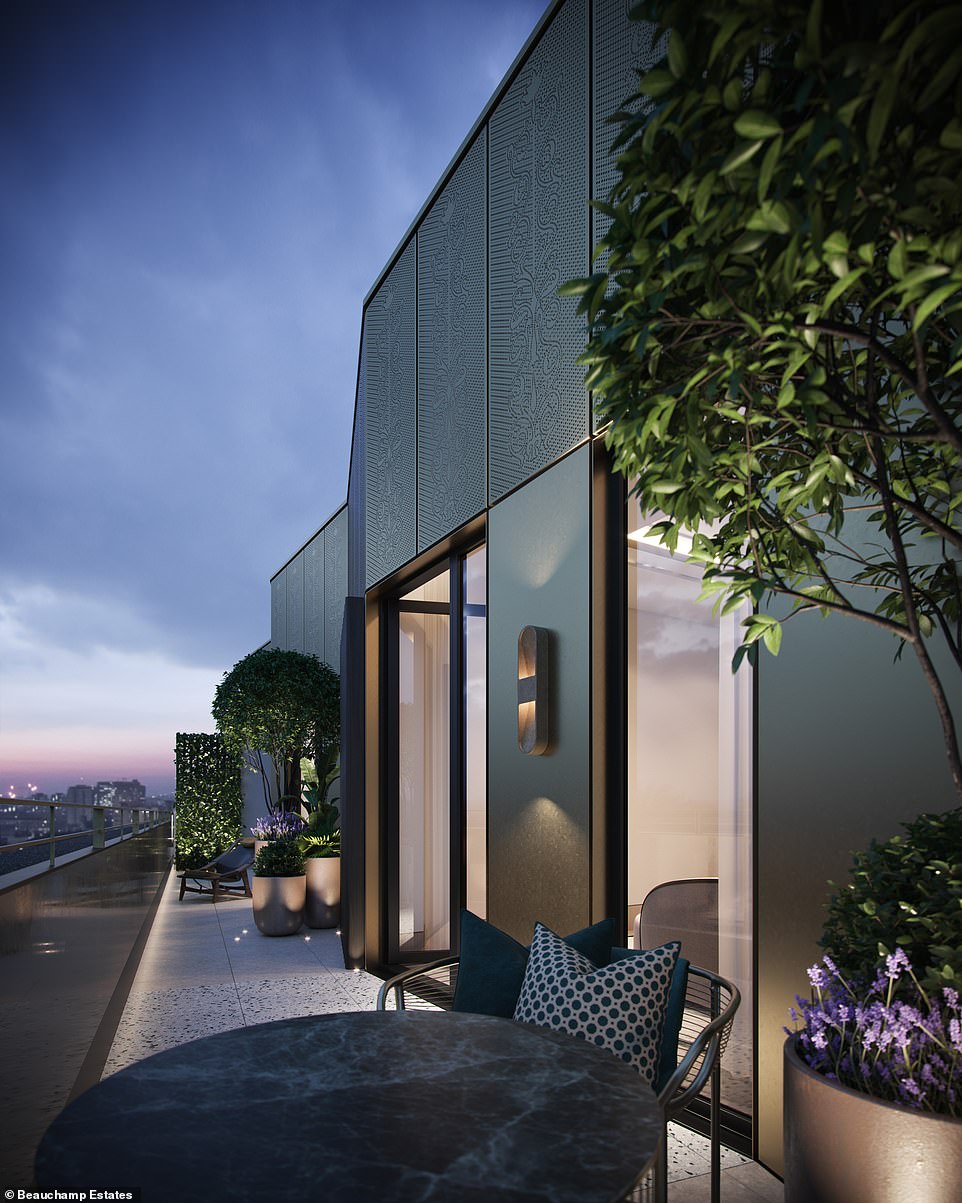 The stunning property provides 7,200 sqft of indoor space with an additional 1,000 sqft of private terraces