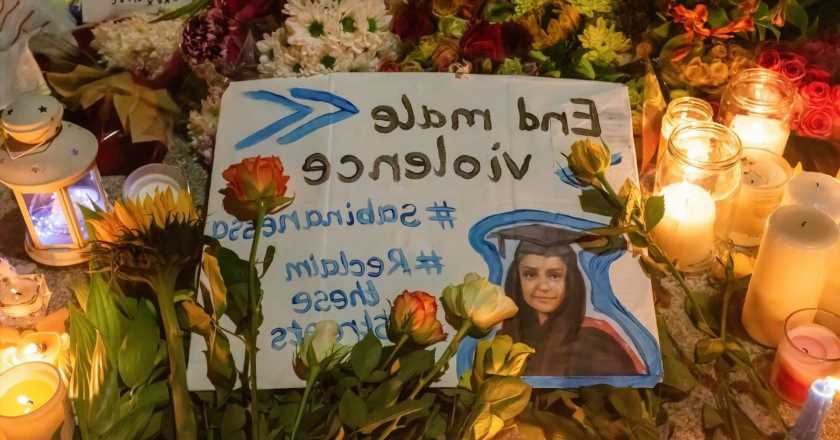 Seven weeks after her murder, Sabina Nessa was laid to rest in a funeral ceremony today as her family calls on the government to take “proactive steps” towards improving women’s safety.

Ahead of her funeral, which was held earlier today, the family of Sabina Nessa has released an emotional tribute to “our beloved Sabina”, describing the “vast void” her death has created.

“Our lives have changed and will never be the same,” the statement shared by ITV News journalist Ria Chatterjee read. “The pain we carry each and every single day will continue to remind us of the loss and also of the change that is desperately needed.

“Today is a sad day for us all. Our loss is immeasurable with the realisation that we will not see our beloved Sabina again. Thoughts of her love, warmth and gentle nature remain with us, and that’s how we will remember Sabina.

“While we know that our hearts will be left with a vast void, we were uplifted to receive support from all over the country. We will continue to fight for justice for Sabina.”

Words cannot describe how we are feeling as a family, we are all devastated by the loss of a beautiful daughter, sister and aunt.”

28-year-old teacher Nessa was attacked and killed on 17 September in south London, shortly after she left her home at around 8.30pm to meet a friend at The Depot bar.

On 29 September, Koci Selamaj, a 36-year-old man from Eastbourne, East Sussex, was arrested and later charged for Nessa’s murder. On 1 October, Selamaj appeared in front of The Old Bailey, who heard how Nessa was murdered in a ‘premeditated and predatory’ stranger attack.

Selamaj remains in custody with a plea hearing set for 16 December.

Nessa’s murder led to a continued outpouring of concern about women’s safety following the murders of Sarah Everard, Bibaa Henry and Nicole Smallman. The vigil following her death was attended by hundreds, including community leaders and local political figures who called for an “end to male violence”.

Calling on the government for action, Nessa’s family added in their statement: “Our communities need to be made safer for women, so nothing like this can ever happen again.

“We need everyone, including the government, to work together with us on this problem. Actions speak louder than words, and we need to see proactive steps being taken for women’s safety.”