With all eyes on the behaviour of AFL officials, family members, club staff and players in the various league hubs in Queensland, the news that two Richmond players – Sydney Stack and Callum Coleman-Jones – significantly breached the COVID-19 protocols late last week was a massive jolt for the AFL.

It's a hot topic of discussion for our AFL Real Footy podcasters this week – Jake Niall, Caroline Wilson and Michael Gleeson – who examine some of the big questions for the Tigers, including whether a flag this year would be tainted and whether the careers of those two players could even come to end. 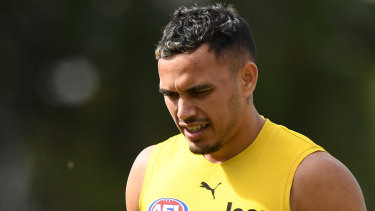 Sydney Stack has apologised and said he’ll own the consequences of his actions on the Gold Coast. Credit:Getty Images

"I think we have a slightly naïve assumption in media – we talk about culture of clubs," Niall says. "And we equate winning with being good citizens.

"I don't see that. I think that teams that win don't necessarily translate to people who are, you know, Mother Teresa, in terms of how they deal with the community.

"This is a competitive sport and the teams that hold it together and are in disciplined in how they play, and have good coaching – which Richmond clearly have and good development of the players – they win.

"There's been a bit of a sense of this narrative of what I called ‘Richmond exceptionalism' – this inference that their community work and these things some how have some influence on their performance as a football club.

Also on the agenda this week – Essendon's massive loss to Geelong, the success or otherwise of their two-pronged coaching set-up and, once again, where will Joe Daniher play in 2021? The drums are beating at Port Adelaide, which clubs will surprisingly miss the eight and much more.