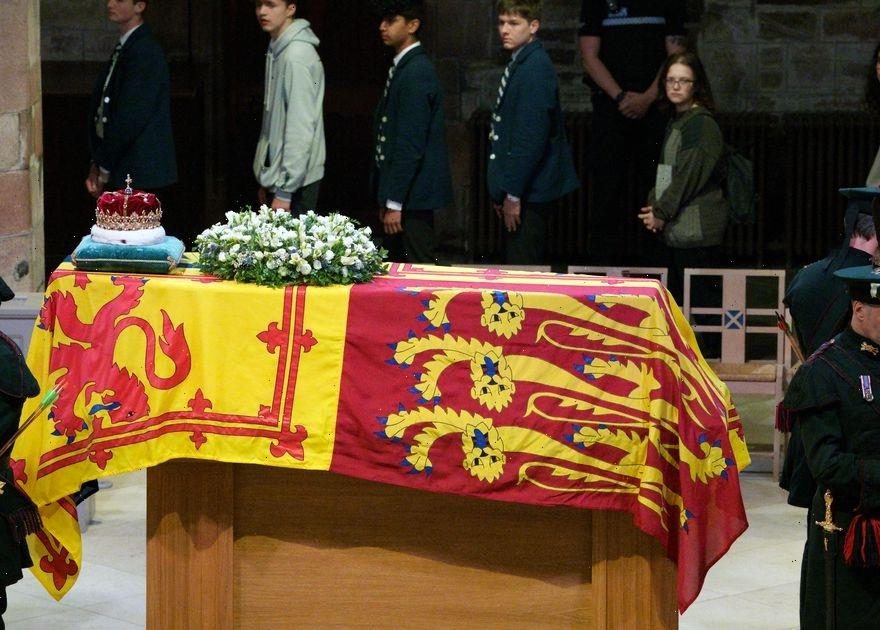 Thousands of people will flood the streets on Tuesday as Queen Elizabeth II ’s coffin makes its final journey to London ahead of her funeral on Monday.

Flying from Edinburgh Airport, the queen’s body will travel in an oak casket over 400 miles before landing at RAF Northolt, where a funeral cortege will then transport it to Buckingham Palace.

The journey, which is roughly 15 miles long, will see tens of thousands of mourners line the streets as they pay their respects this evening, before the Queen lies in state tomorrow. At 2.22pm precisely on Wednesday, the coffin will then be transported on a gun carriage of the The King’s Troop Royal Horse Artillery to the Palace of Westminster.

Accompanied by the sound of minute guns fired from Hyde Park by The King’s Troop Royal Horse Artillery, the cortege will make a trip past several iconic London landmarks including The Mall, Whitehall and Big Ben during the journey.

For all of the latest updates, sign up for OK!'s Royal newsletter .

Upon arriving at Westminster the queen’s coffin will lie in state until 6:30am on the day of her state funeral, Monday September 19, with over a million people expected to pay their respects to the departed monarch in just under five days.

Mourners hoping to bid farewell to the Queen are being warned of exceptional queues, with some reports suggesting they could even exceed five miles long.

According to Culture Secretary Michelle Donelan, waits of up to 30 hours are possible, with some mourners even considering queuing overnight just to say goodbye to the historic monarch who reigned for 70 years.

"We are obviously expecting and planning for unprecedented demand", she told The Times.

Formal details of the queue have yet to be announced, but will be made public at 10pm tonight.

However this didn’t deter some patriotic mourners, who have already made their way to London more than two days before lines officially open at 5pm tomorrow.

“I really, really want to be part of it,” one mourner told the Mirror.“I don’t want to miss it in case they control the crowds if (the queue) gets too long.”

The coffin is due to depart Edinburgh this afternoon, with her late majesty accompanied by the Princess Royal and her husband, Vice Admiral Sir Tim Laurence, on her journey from the Scottish capital to London.

At Edinburgh Airport, her coffin will be conveyed on to an RAF C-17 by a bearer party, while The Royal Regiment of Scotland forms a guard of honour.

Meanwhile, upon arriving at RAF Northolt, The Queen’s Colour Squadron will convey the coffin to the state hearse.

It will then travel to Buckingham Palace via the A40, Eastbourne Terrace, Lancaster Gate, Bayswater Road, Marble Arch, Park Lane, Hyde Park Corner and Constitution Hill.

With so many people rushing to the capital to be part of the historic moment, Transport bosses have warned that the city will experience “unprecedented travel demand”.

As a result, some tube stations will need to temporarily close to avoid overcrowding, with passengers urged to avoid Green Park station altogether.

Network Rail, Transport for London and the Rail Delivery Group said: “As Her Majesty’s coffin travels to London to lie in state, it is expected that we will see unprecedented travel demand in the capital, especially from Wednesday, September 14.”

A service will continue to run on the Elizabeth line between Paddington and Abbey Wood on Sunday however, in a break from its usual schedule of being closed on Sundays.

Meanwhile, huge crowds are also expected to line the streets in Belfast and Royal Hillsborough today as the King and Queen Consort visit Northern Ireland.

This week, OK! celebrates the life of Her Majesty the Queen with a commemorative special in honour of Britain’s longest reigning monarch. Be sure to pick up your copy.