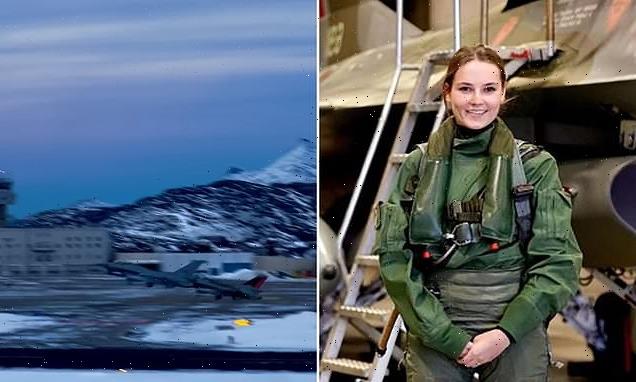 Another royal star has taken off this week, with Princess Ingrid Alexandra of Norway co-piloting a plane during a tour of a royal air force base.

The 17-year-old royal, who is the daughter of Crown Prince Haakon of Norway and Crown Princess Mette-Marit, and second-in-line to the throne, took a ride on a F-16 fighter jet during the visit to the Bodø base on Saturday.

The royal has been touring several army and air force bases in Norway to learn more about the country’s armed forces. When she ascends the throne, she will become commandant of Norway’s armies.

Seating in the backseat of the jet, the teenage princess observed as a trained pilot flew it away from the base, and later was allowed to control it briefly during a flight over Northern Norway.

The flying demonstration saw Ingrid Alexandra follow into the footsteps of her father, who co-piloted a F-16 Falcon in 1991. 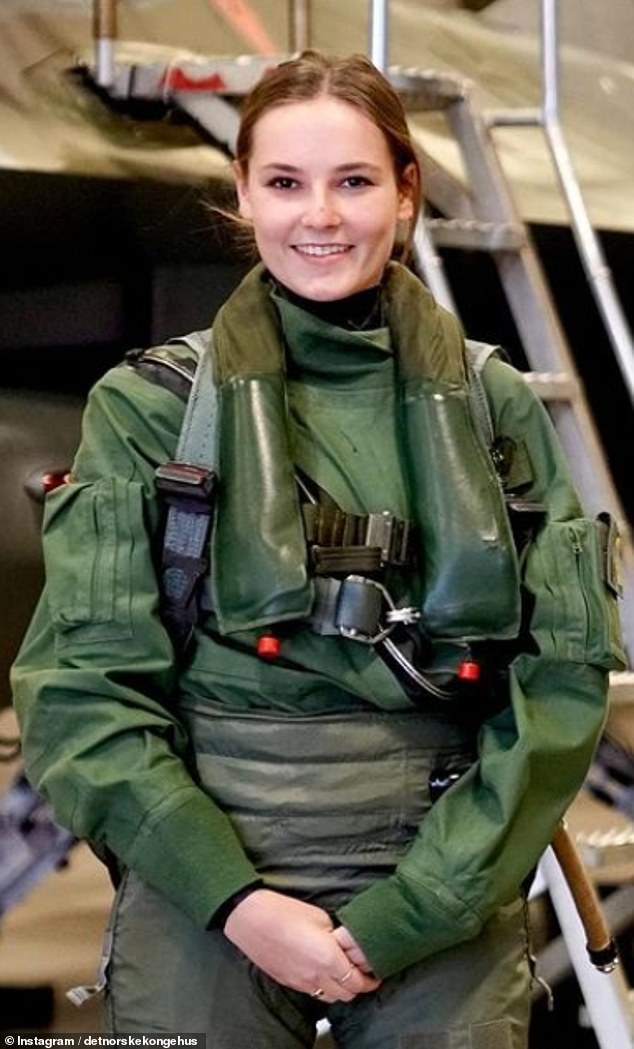 Princess Ingrid Alexandra of Norway, 17,  pictured, co-piloted a f-16 plane during a visit to the royal air force base of Bodø on Saturday

Dressed in a full uniform, the princess was greeted at the base by General Rolf Folland, who leads the Norwegian Royal Air Force, which is called the Luftforsvaret.

During her visit, she was briefed about Norway’s armed forces’mission statement, and learned more about the QRA – Quick Response Alert – where F-16 planes can be ready to fly in just 15 minutes to intercept foreign planes on NATO missions.

The royal went through a ‘thorough’ medical exam before she hopped on the plane.

Sitting on the F-16’s backseat, she was allowed to take control of the plane and pilot it as it flew over Northern Norway. 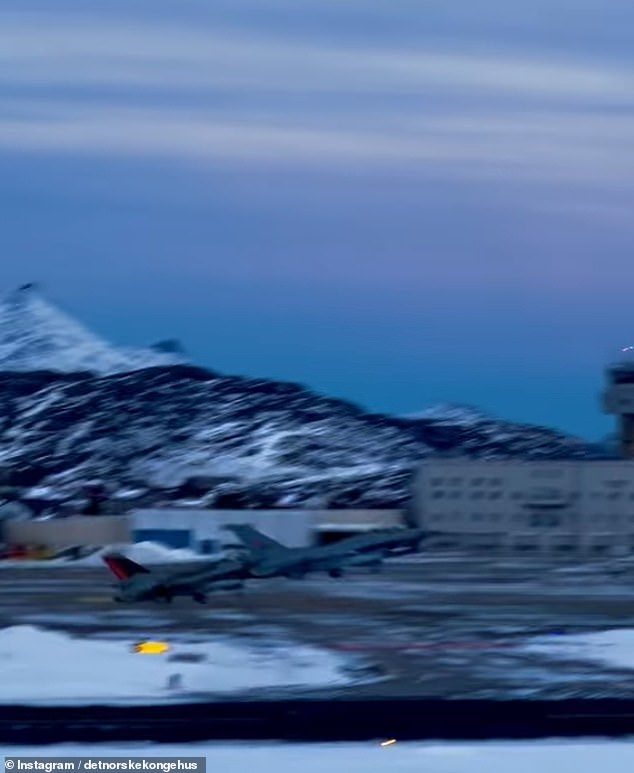 Ingrid Alexandra took off in the plane, pictured, and took control of it as it flew over Northern Norway

Ingrid Alexandra is preparing herself to take on royal duties after a childhood spent largely away from the spotlight.

F-16 are being phased out of Norway’s air force and will be replaced by F-35, meaning it will probably e the last time a member of the royal family is allowed to fly in one.

Earlier this year she visited a female-only squadron of the army to learn more about their work.

She has a brother, Prince Sverre Magnus, who is 16, and ranks above him in the line of succession due to the rule of absolute primogeniture, which states that the firstborn of the Crown prince will succeed him, regardless of gender.

The Norwegian royal has kept a low profile growing up, attending a local state primary school, which was attended by her half brother, Marius Borg Høiby, whom Mette-Marit had before she married Prince Haakon.

Her parents wanted her to have as normal a childhood as possible, and Ingrid would walk to school with her half brother.

Her godmother is Crown Princess Victoria of Sweden, and Ingrid Alexandra was one of her bridesmaids at her 2010 wedding. 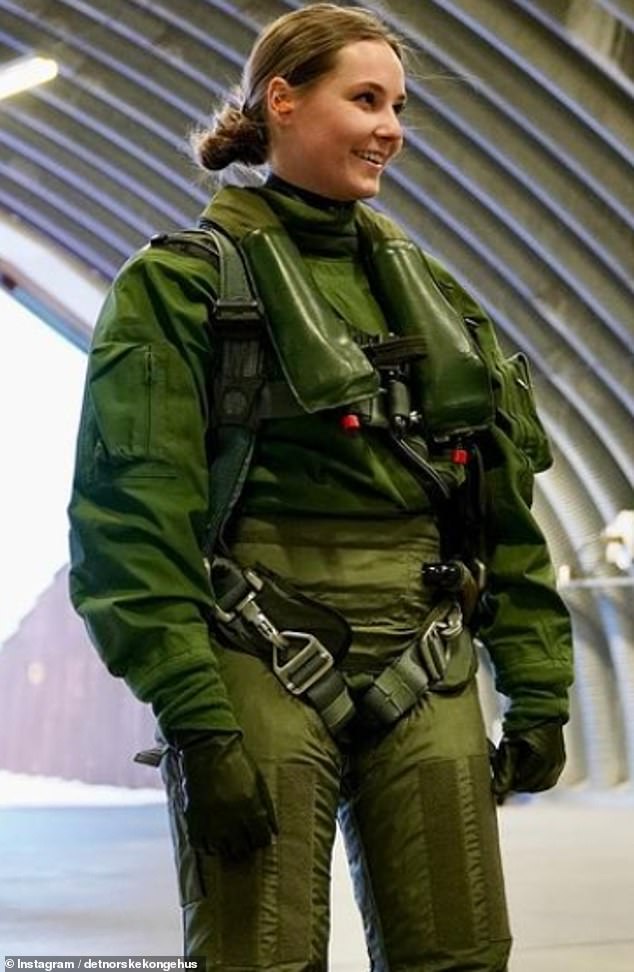 The royal dressed in pilot gear and seemed enthusiastic to follow into her father’s footsteps. Crown Prince Haakon of Norway flew a F-16 plane in 1991

During her teenage years, she attended the private English school Oslo International School so she could become fluent in English, and later attended the Elvebakken Upper Secondary School in Oslo.

Turning 18 on January 21, Ingrid Alexandra has been stepping in with her father, Crown Prince Haakon of Norway, the son of King Harald and Queen Sonja, to take on more royal responsibilities.

This summer, she looked solemn as she and her father laid a wreath on Utoya island as Norway marked ten years since Anders Breivik killed 77 people in the country’s worst ever massacre.

King Harald, 84, and Queen Sonja, also 84, have been reigning over Norway for 30 years after ascending the throne in 1991. 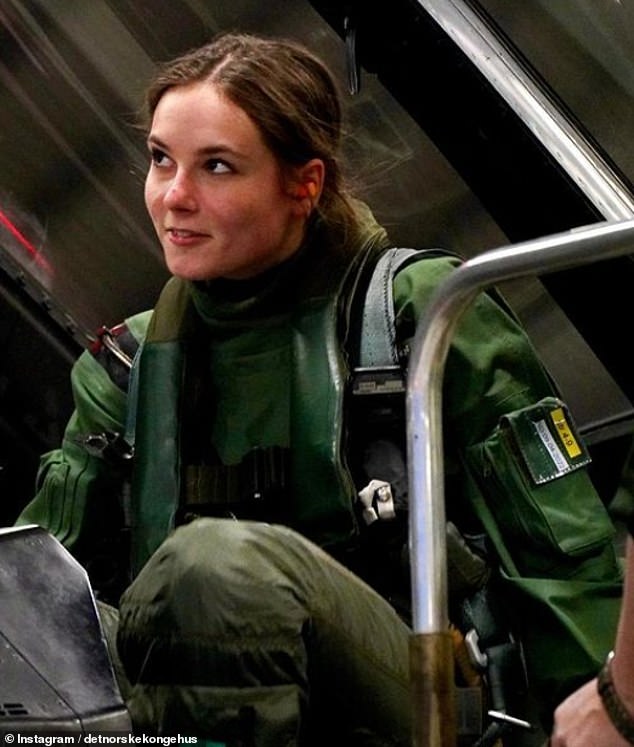 Ingrid Alexandra listened carefully as she was briefed about how the armed forces of Norway;s mission statement, pictured 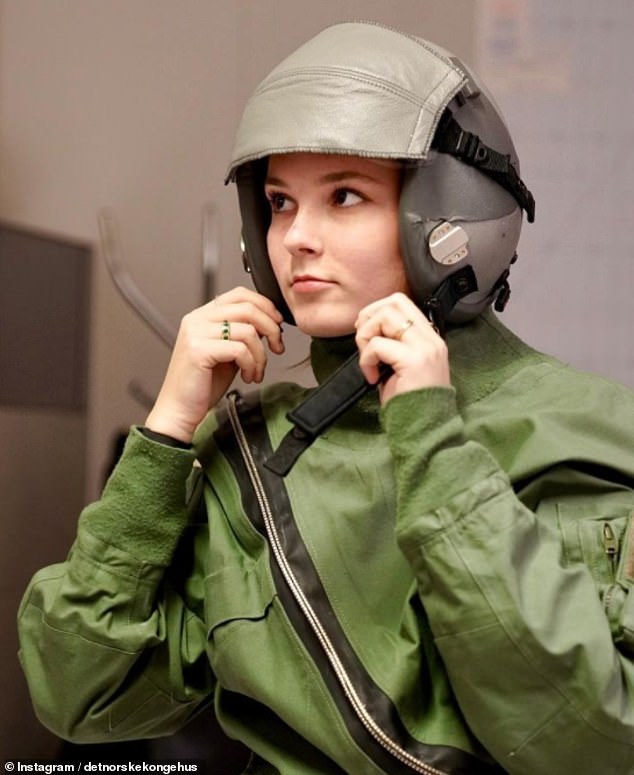 The royal looked serious as she put on her helmet, pictured, before hopping on the F-16 plane on Saturday 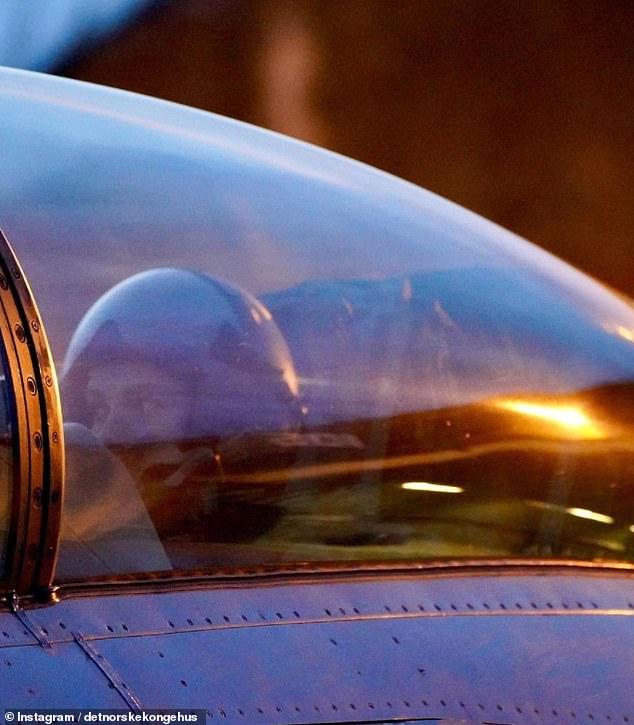