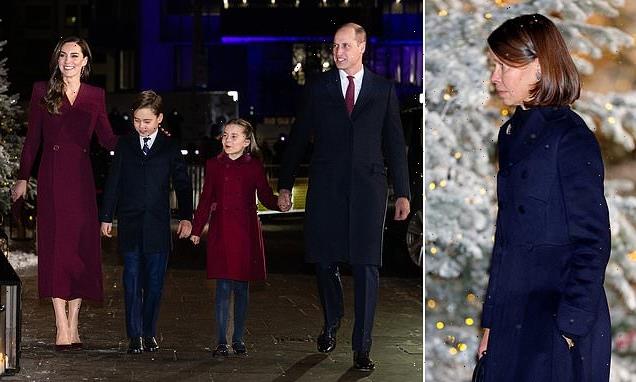 Prince Harry’s godmother made a low-key appearance at the Princess of Wales’s Christmas carol service at Westminster Abbey as the Royal Family put on a show of solidarity.

Lady Sarah Chatto, the niece of the late Queen Elizabeth II, almost went by incognito as she walked into the Abbey last night in a structured black coat ahead of Together At Christmas concert, set to air on ITV on December 24.

She appeared not to have received the memo about the colour of the evening, as the Princess of Wales, her daughter Princess Charlotte, Zara Tindall and Pippa Middleton all arrived at the Abbey in plum/burgundy coats and coat-dresses. Mike Tindall and Prince William also echoed the colour theme as they wore ties with similar shades of deep maroon.

The Royals put on a show of solidarity after the final three episodes of Harry and Meghan’s explosive £88 million Netflix series dropped yesterday morning, in which the Duke of Sussex claimed his brother William had ‘screamed and shouted’ at him during crisis talks at Sandringham as he discussed his future within the Royal Family with King Charles and Queen Elizabeth II in early 2020. Buckingham Palace has declined to comment. 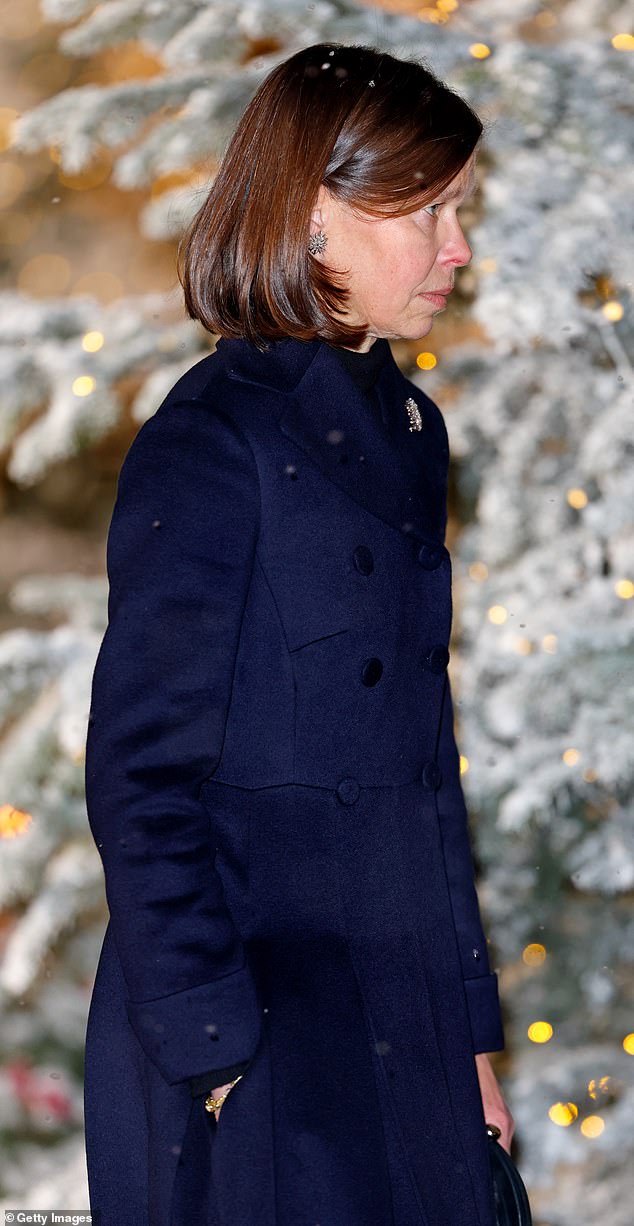 Lady Sarah Chatto (pictured), 58, almost went incognito as she arrived at Westminster Abbey for the Together at Christmas carol concert last night, hosted by the Princess of Wales

Lady Chatto, the only daughter of Princess Margaret, is Harry’s godmother and the second cousin of the Duke of Sussex and Prince of Wales.

She is also godmother to Lady Louise Windsor, the daughter of Sophie Wessex and Prince Edward.

Lady Chatto’s last visit to Westminster Abbey was for a much more sombre occasion as she attended the state funeral of Queen Elizabeth II, and she paid a sweet tribute to her aunt in her outfit. 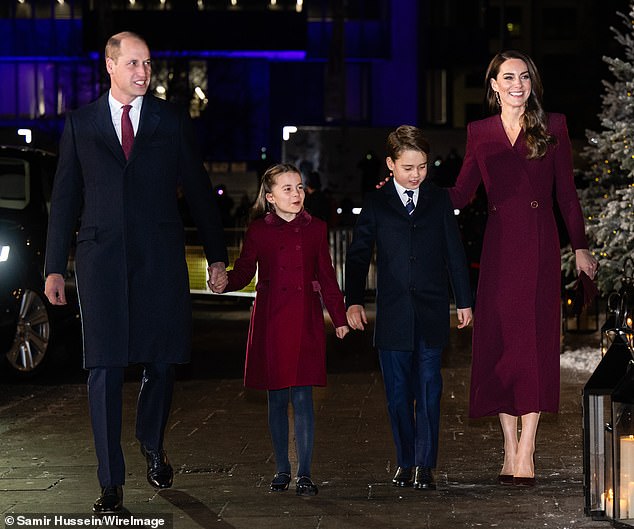 The Princess of Wales arrived at the carol service with her husband, Prince William and children Princess Charlotte and Prince George

The 58-year-old wore the Snowdon Floral Brooches, thought to have been a gift from her mother Princess Margaret.

Margaret, Her Majesty’s younger sister, was given the brooches by her ex-husband Antony Armstrong-Jones, 1st Earl of Snowdon, to mark their wedding in 1960.

In recent decades, the late Princess’ only daughter Sarah has worn them for key occasions – including her own wedding to husband Daniel Chatto in 1994, when she wore them as a tiara, and to her mother’s funeral in February 2002.

Sarah, who enjoyed a warm relationship with her aunt throughout her life, and remained close to Her Majesty and Prince Philip following her mother’s death in 2002, also sported the jewels to the celebrations for the Queen and the Duke of Edinburgh’s 50th wedding anniversary in 1997.

Last night’s carol concert included further tributes to Her late Majesty as Prince William evoked her memory in a speech made to the guests.

William poignantly read a passage from the late Queen’s 2012 Christmas message in which Her Majesty said she was ‘always struck by the spirit of togetherness’ during the festive season. It was a time, she added, ‘when we remember that God sent his only son ‘to serve, not to be served’.

Kensington Palace said the Together At Christmas carol service, the second concert Kate has hosted, was dedicated to the late Queen and the values she demonstrated throughout her life, including ‘duty, empathy, faith, service, kindness, compassion and support for others’.

The palace said these principles were ‘shared and personified by the inspirational guests who have been invited to the Abbey in recognition of their tireless work to help and care for those around them’.

A Christmas tree was decorated with small Paddington Bear figures – a nod to the late Queen’s famous jubilee comedy sketch – while guests were greeted with atmospheric snowflakes from a snow machine as they arrived at the entrance.