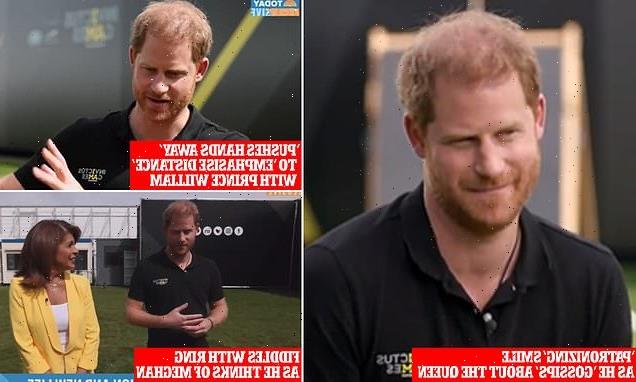 The ‘gossipy’ Duke of Sussex ‘wanted to emphasise’ his closeness to the Queen and distance from his brother Prince William’ during his Invictus Games interview, a body language expert has claimed.

In his latest interview on US television, Prince Harry, 37, who is currently living in his $14 million mansion in California having stepped back from royal duty last year, spoke about his life in the US and his relationship with the Queen.

Sitting down with  NBC Today presenter Hoda Kotb in The Hague, the Duke also said he feels Diana’s ‘presence in almost everything that I do now’ and that he talks to his son Archie about her and there are photos of her in their home.

Body language expert Judi James told FEMAIL the Duke appeared ‘open, intimate and confiding’ throughout the interview, saying Harry was ‘slightly gossipy especially when he talks about the Queen.’ 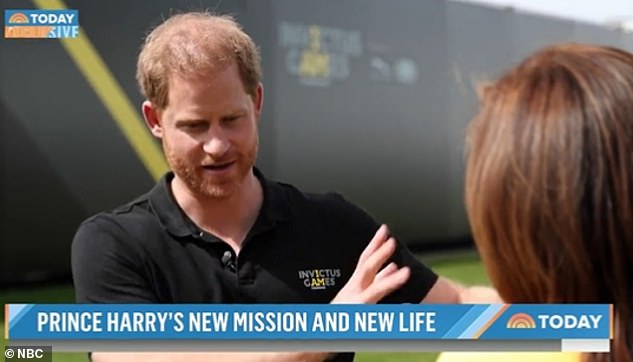 The ‘gossipy’ Duke of Sussex ‘wanted to emphasise distance between him and his brother Prince William’ during his Invictus Games interview, a body language expert has claimed

Meanwhile she said he wanted to ’emphasise distance’ between him and his brother Prince William.

The Duke has a deeply strained relationship with his family – especially his father Prince Charles and brother Prince William – and missed last month’s memorial service at Westminster Abbey for his grandfather Prince Philip.

His on-air sit-down marks the latest in a handful of media interviews that he has done since he and Meghan arrived in The Hague on Friday for the start of this year’s Invictus Games.

As well as doing several interviews during his time at the Games, Harry has also been followed by a crew of cameramen from Netflix, which is making a documentary about the sporting event as part of the Sussexes reported multi-million pound deal with the streaming giant.

FEELING IN PAIN WHEN THINKING OF DIANA 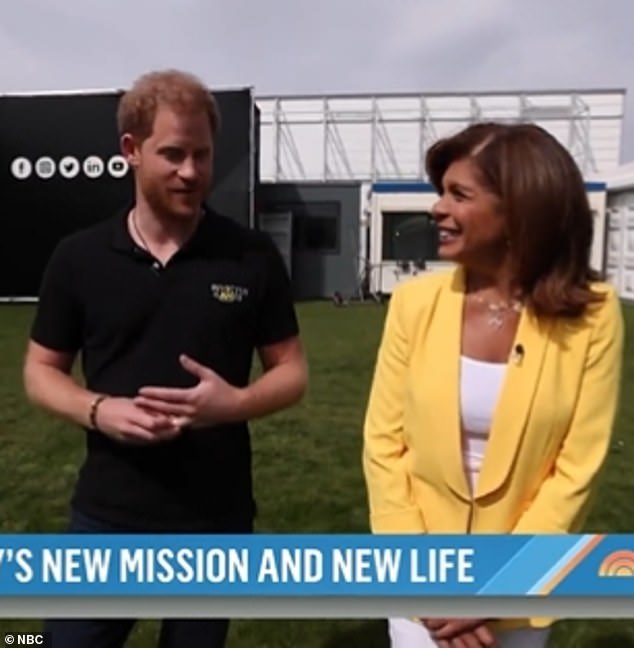 Judi revealed: ‘When he is first asked about Diana he performs a self-comfort gesture we have seen before during the Invictus games: a rolling and fiddling of his wedding ring that implies his thoughts and desire for support are with Meghan.

‘This is also a partial barrier ritual to create a slight distance and sense of self-protection.

‘But once he is facing the interviewer all barriers drop and his gesticulation is open and emphatic to the point of over-congruent, miming most of his words as though desperate to ensure the messages hit home.

‘There is also a micro-wince facial gesture that suggests ongoing pain when he thinks of Diana.’

DETERMINED TO ‘EMPHASISE DISTANCE’ WITH WILLIAM 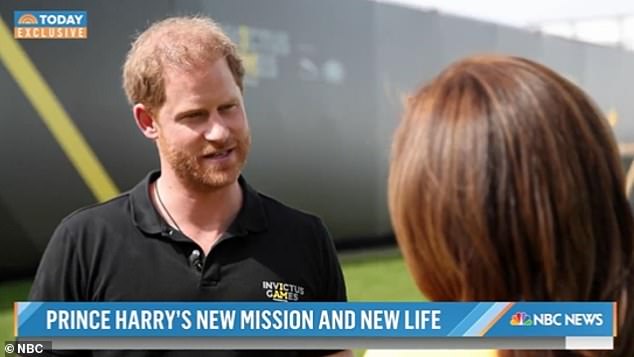 The body language expert explained: ‘Prince Harry’s body language signals when he speaks about his brother William and their mother suggest the opposite to sharing.

‘William is literally held by Harry’s left hand at the furthest distance, with his arm outstretched fully as though wanting to emphasise the distance between them.’

She continued: ‘Once William’s ‘position’ in Harry’s imagination has been established he uses his right hand to refer to himself, kept a long distance away from his left.

‘At one point he seems to be holding and invisible ball that he ‘throws’ in William’s direction dismissively. 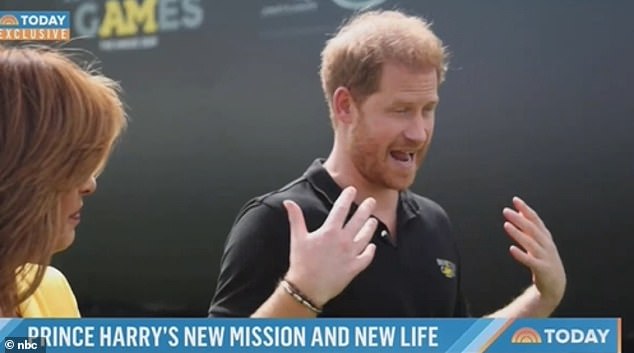 According to Judi, Prince Harry used ‘distancing gestures’ and ‘alternating hands’ to describe his relationship with Prince William

‘He tells us that Diana ‘Got him (William) set up’ and that now she is ‘helping me’.’

‘His distancing gestures and the way he alternates hands suggest he felt William had his mother’s attention for a long time but that now he ‘Harry’ has her almost to himself.’

She continued: ‘When he says ‘His kids’ about William he uses a pushing away gesture with the palm of his left hand.

‘When he has finished he shrugs as though these dramatic rituals are nothing and he is in emphatic agreement when the interviewer says Diana must be proud of him.’

HAPPY TO ‘GOSSIP’ ABOUT THE QUEEN 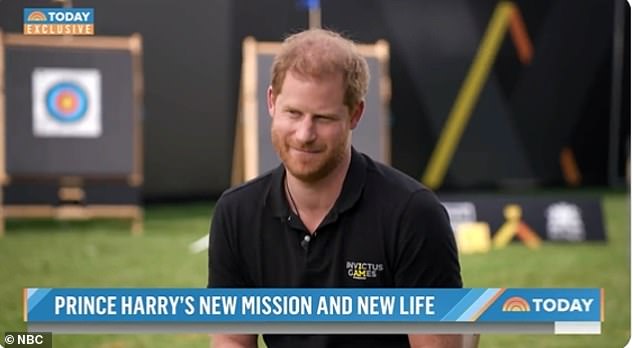 After using ‘distancing’ gestures to describe his relationship with Prince William, Prince Harry’s ‘tone softened’ and he became ‘gossipy’ when talking about the Queen

Judi revealed: ‘This is where his tone softens and drops and he makes several facial ‘nods’ to the interviewer to suggest a more confiding and even gossipy tone.

‘When he talks about getting ‘bored of birthdays’ he performs a patronizing-looking smile with his lips clamped and stretched and a knowing nod that appears to be a tie-sign to the interviewer.

‘His pause when asked if the Queen will be bored by her Jubilee, an event the whole country is waiting to share with her, his ‘Errr…’ comes before an unsure ‘no, I don’t think so’ that seems to leave the image of potential boredom hanging in the air.’

ATTEMPTS TO DISTRACT WHEN ASKED ABOUT RETURNING TO THE UK

The body language expert suggested Prince Harry had ‘attempted to distract when he was asked about returning to the UK for the Queen’s Jubilee.

She explained: ‘Asked if he will attend, his reply is speedy by contrast.

‘Looking to his left as though to recall his response or deliberations he shakes his head and his verbal tone drops.

‘He throws his right hand out high in what looks like an attempt at distraction to maybe get off the subject and back onto the Games.

‘He giggles as he says he wants to ‘get my kids to meet her’ (Queen) and he performs an eye-narrowing that looks almost like a knowing wink.’

A RELAXED AND LOVING FATHER 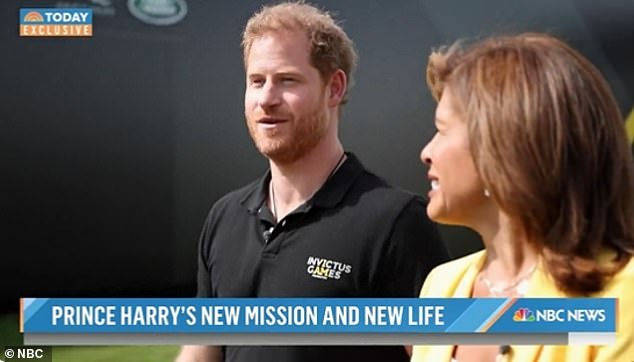 Judi continued: ‘Harry looks relaxed talking about fatherhood here, with his mime rituals increasing to get his messages across.

‘His facial features soften and he performs a double-handed cupping gesture just beneath his chest to suggest love and protection.

‘He is happy and with his hands held high he appears to be open and detailed when talking about the children he clearly adores.’

Prince Harry on secret Queen trip, how America is ‘home’ and whether he misses William & Charles

On visiting the Queen: ‘Being with her, it was great. It was just so nice to see her. You know, she’s on great form.

She has always got a great sense of humour with me and I’m just making sure she’s protected and has got the right people around her.’

On the best thing about the Queen: ‘Her sense of humour and her ability to see the humour in so many different things.

We have a really special relationship. We talk about things that she can’t talk about with anybody else, so that is always a nice peace to her.

But I think she’s… I think after a certain age you get bored of birthdays.’

On whether he misses William and Charles: ‘Look I mean, for me at the moment, I’m here focused on these guys and these families and giving everything that I can, 120 per cent to them to make sure they have the experience of a lifetime.

That’s my focus here. And when I leave here, I get back and my focus is on my family who I miss massively.’

On whether he will attend the Platinum Jubilee celebrations: ‘I don’t know yet. There’s lots of things with security issues and everything else.

This is what I’m trying to do, trying to make it possible that I can get my kids to meet her.’

On Archie: ‘He’s into the why stage. Why this? Why that? Why that? And instead of just trying to move it on, I give him the most honest answer I can.

And then it goes on and on and on until he’s satisfied. And then that’s it. It’s done.

Otherwise it ends up with – because the world is round and that it is the way life is.’

On his late mother Princess Diana: ‘It is almost as though she’s done her bit with my brother and now she’s very much, like, helping me. Got him set up.

And now she’s helping me set up. That’s what it feels like, you know?

He’s got his kids. I’ve got my kids, you know the circumstances are obviously different.

But now, I feel her presence in almost everything that I do now. But definitely more so in the last two years than ever before. Without question. So she’s watching over us.’