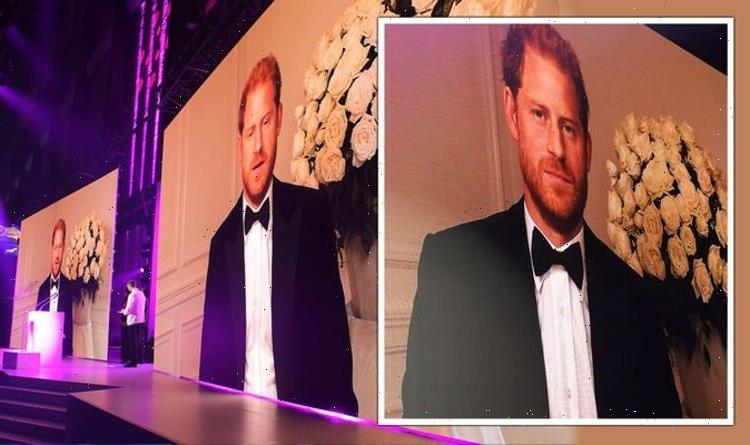 The British GQ Men of the Year Awards took place at the Tate Modern in central London last night, September 1. Having worked closely with the magazine for the past year, Jonathan Heaf, British GQ’s Chief Content Officer, asked Prince Harry to announce the final award-winners.

Harry appeared via video call, speaking live from his home in Los Angeles.

Wearing a traditional black velvet tuxedo, the Duke of Sussex presented the concluding award to Professor Dame Sarah Gilbert, Dr Catherine Green, and the entire team behind the creation of the Oxford, or AstraZeneca, vaccine.

The Prince recognised the scientists’ incredible achievements over the past year.

He said: “I’m deeply honoured to be introducing our final awardees, who you’ll immediately recognise for their landmark contribution to the fight against COVID-19.

“Our heroes of this evening are Professor Sarah Gilbert, Doctor Catherine Green, and the entire team of dedicated Oxford scientists.

“Their breakthrough research on the Oxford Vaccine has brought the world one of our greatest tools for achieving vaccine equity.”

The Prince then went on to speak about vaccine hesitancy and those he believed to be to blame.

He said: “Families around the world are being overwhelmed by mass-scale misinformation across news media and social media, where those who peddle in lies and fear are creating vaccine hesitancy, which in turn is dividing communities and eroding trust.”

Although smiling and sat in front of a large bouquet of yellow roses, one expert claimed Harry’s speech was “serious” and his body language came across as though he were an “expert” on the issues he brought to the audience’s attention.

Body language expert Judi James said: “Appearing on two huge screens and clearly wanting to align with the theme of the event with his bow tie and massive flower arrangement in the background, Harry keeps his body language minimal to deliver a very pointed lecture about vaccines to his audience.

“This is formal and rather regal posing with no apparent signs of the kind of fun approach you could expect at a magazine awards.

“Harry sits slightly slumped – his shirt creases across the middle – to suggest he is in guru, expert, or campaigning mode, rather than anything reflecting more military experience.”

She said: “His smile suits his serious, hard-hitting themes, with no sign of the grin he is famous for.

“It is more a closed lip mouth curl that would suggest concern for his serious subject.

“This rather low energy, seated look with no apparent gesticulation places an ‘expert’ rather than a more personal spin on his themes of ‘mass-scale misinformation across news media and social media where those who peddle lies and fear’.”

The body language expert added: “This ensures he is here to refer to the ‘vaccine hesitancy’ rather than any more general interpretations.”

Harry ended his speech by thanking the team behind the Oxford vaccine, saying: “The Oxford Team have done their part.

“They are heroes of the highest order who gave us an instrument to fight this disease.

“They are our nation’s pride, and we are deeply indebted to their service.”

He continued: “For the rest of us – including global governments, pharmaceutical leaders, and heads of business – we have to keep doing our part.

“That must include sharing vaccine science and supporting and empowering developing countries with more flexibility.

“Where you’re born should not affect your ability to survive, when the drugs and know-how exist to keep you alive and well.

“Thank you, again, to Professor Gilbert and Doctor Green, who The Guardian called ‘two ordinary people who managed to pull off an extraordinary feat while dealing with the everyday stresses that come with being full-time mums and breadwinners in a notoriously insecure and poorly paid field’,” the Duke of Sussex added.