Someone’s got a cake craving! Chrissy Teigen, who is currently pregnant and expecting her third child with husband John Legend, baked the “best” carrot cake on Sunday, August 16, and even shared her trick for ensuring that the pastry won’t become dry.

“This color is incredible,” the 34-year-old said on her Instagram Stories at the time as she focused on three separate layers of the cake fresh from the oven. “While it’s still super hot I’m going to put glaze [on top] and it’s going to soak up all that glaze and be really sticky.” 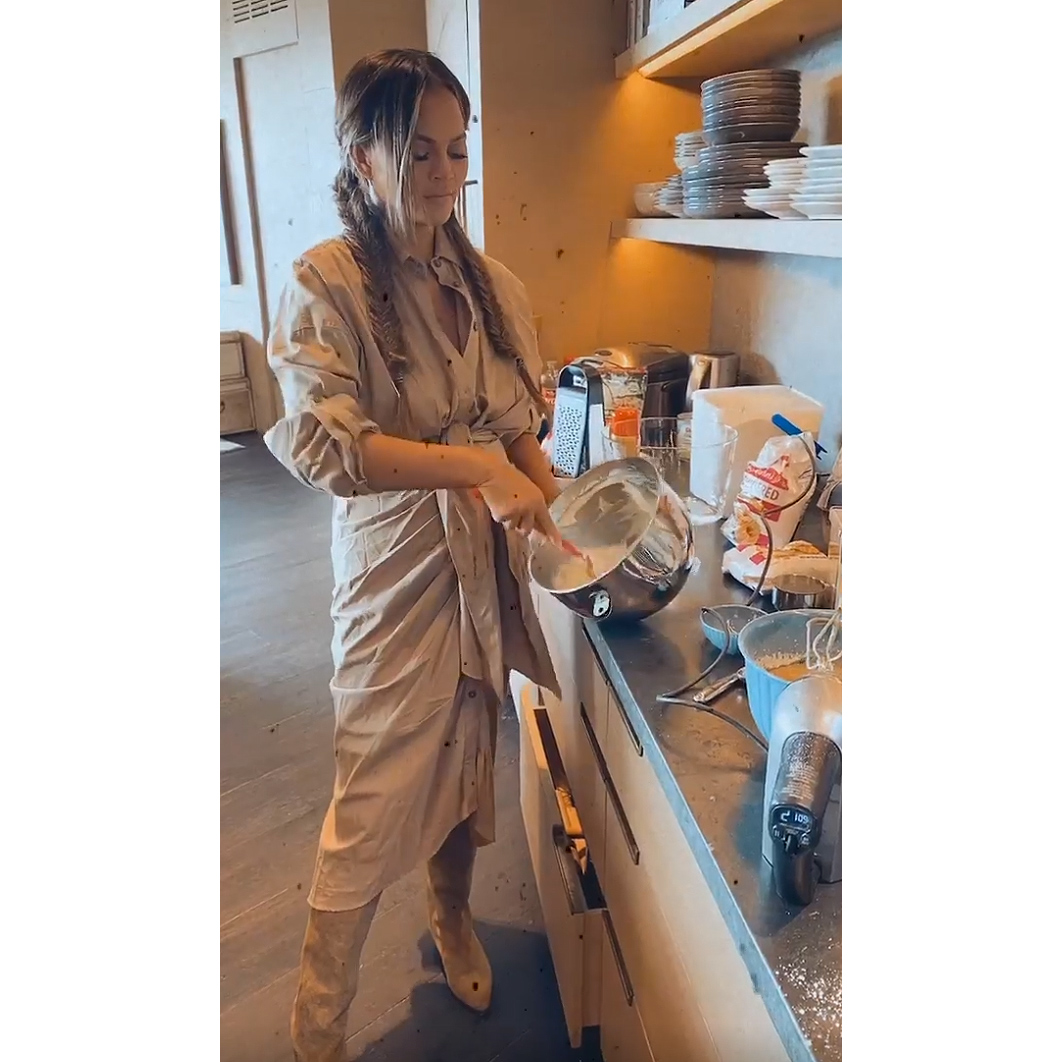 On Twitter, the Bring the Funny judge noted that she was “making the world’s best carrot cake! Coconut, canned crushed pineapple and the pouring of hot buttery glaze over the warm layers make this extremely, extremely special.”

The Cravings author added via Instagram: “Instead of keeping it as a cake, it tends to be, like, a really messy cake to eat — it just falls apart — I’m going to put it in my little trifle thing and make it, like, a scoopable, layered cake.”

As Teigen topped each layer with homemade glaze, she described the sweet sauce as a “buttery caramel” and made sure to soak the edges of each cake pan, so there wouldn’t be a dry bite to be had. “Gorgeous,” she gushed. 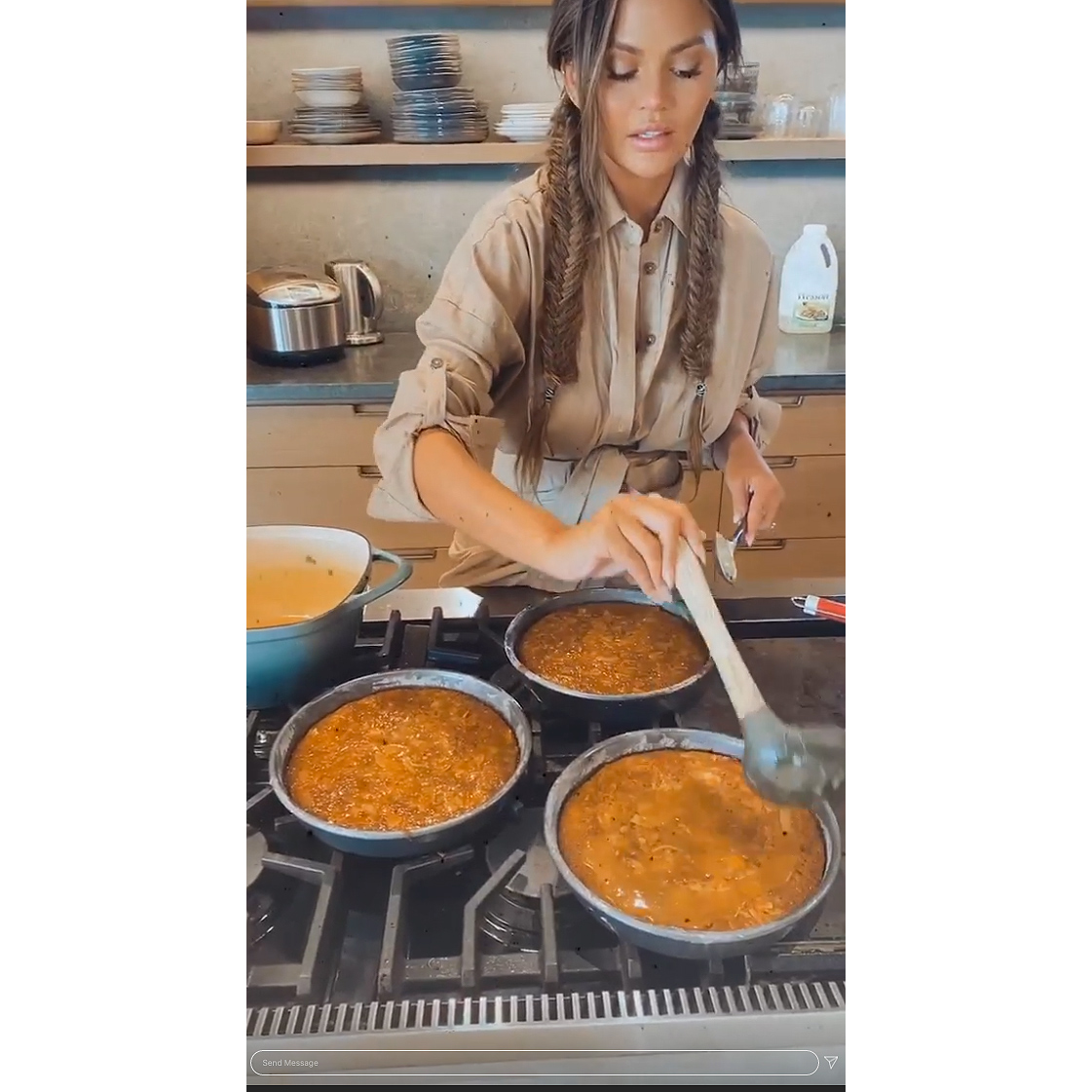 When it came time to arrange her creation, the Chrissy’s Court host admitted she wasn’t “exactly positive” what she was going for. “I know that I want it broken up. I’m so excited because, honestly, the best part of carrot cake is the inside,” she explained as she broke off a piece and placed it inside a trifle dish. “The coconut flakes are amazing and the crushed canned pineapple makes it really amazing. I want you to be able to see all of this good stickiness, so my whole layer on the bottom is going to showcase all of that.”

After coating the bottom of the glass dish with cake pieces, Teigen added some frosting to the mix and ran some of it up the sides of the bowl so it was visible from the outside.

“Mom, if you want, I can lick your finger!” the Utah native’s 4-year-old daughter Luna offered as she spread the frosting around. (Teigen and Legend, 41, are also parents of son Miles, 2.)

Luna then added a handful of raisins to the frosting layer. “Tell me when to stop,” she told her mom.

“Just whenever you think that there’s enough delicious golden raisins in there,” Teigen replied. She then shared a look at the finished dessert, which boasted an “R” made out of raisins on top in honor of a pal who was celebrating a birthday.

The Cravings: Hungry for More author, who feasted on carrot cake at her September 2013 wedding to Legend, later posted a photo of her sweet treat in a car and dubbed it a “travel trifle.”

Us Weekly confirmed on Thursday, August 13, that Teigen is pregnant with baby No. 3. The star showed off her baby bump during a shopping trip that same day, then continued giving glimpses of her pregnancy progress on Twitter. “Look at this third baby s–t,” she said in a video at the time. “What the? Oh, my God.”

On Friday, August 14, the Sports Illustrated Swimsuit model revealed that she is “very worried” about her pregnancy since she has previously conceived with the help of in vitro fertilization.

“Part of me misses the safety of my perfect embryos, created in their little dish. They felt untouchable and safe,” the Cravings cookware creator tweeted. “IVF was an amazing choice for us to be able to make. So hard, but we got two beautiful monsters out of it. I promise you, I never ever ever ever ever thought I could.”

For his part, in an interview on Monday, August 17, Legend called the little one on the way a “little quarantine surprise.”