Police are searching for dozens of people thought to be migrants who fled on foot from the back of an 18-wheeler at a truck stop in San Antonio, the CBS affiliate there, KENS-TV reports.

The station says at some point after 6 p.m. Thursday, city emergency units had a massive response to a TA truck stop off I-10.

A San Antonio Police Department spokesperson told reporters police got a call from someone driving on the interstate who thought something about the big rig was suspicious – perhaps even people in the trailer who were potentially being smuggled. 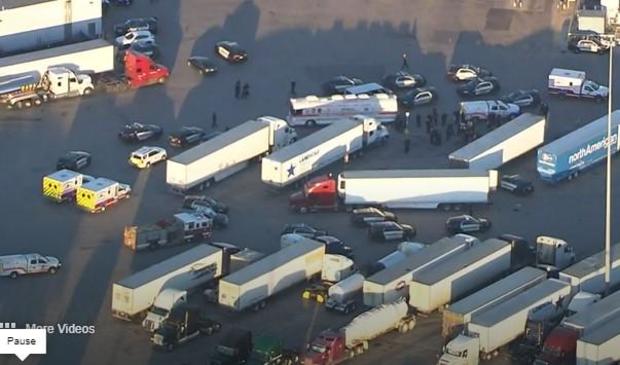 The spokesperson said the caller “potentially saved a lot of lives. We never know how these cases are gonna end up. But somebody was alerting us that they noticed something suspicious. They called us. We had an officer who was behind the vehicle relatively quickly.”

Authorities initiated a traffic stop and the rig went to the truck stop. At that point, what police say were 80 to 100 adults jumped from the truck’s trailer and fled.

As of 8:45 p.m. local time, about 29 men and women had been caught,  police said, adding that one who was dehydrated was taken to a local hospital out of precaution.

The driver of the truck, identified only as being 49 years old, is in custody, and U.S. Homeland Security officials are leading the investigation into where the people came from and how long they were in the big rig.