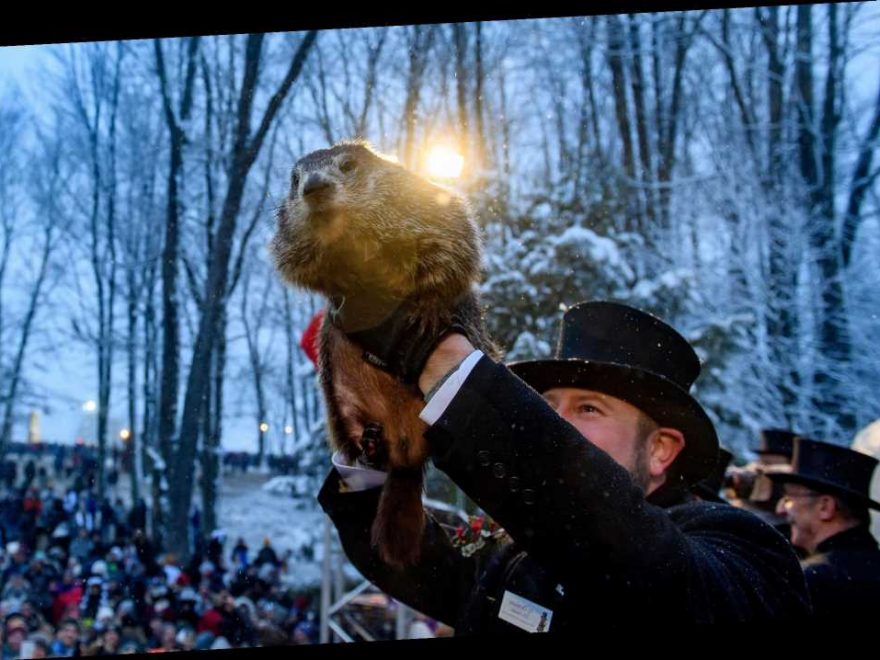 Snow may be falling in the Northeast, but that won't stop Punxsutawney Phil and "his inner circle" from marking the 135th Groundhog Day.

The Punxsutawney Groundhog Club tells PEOPLE that their virtual celebration at Gobbler's Knob will continue as planned with "Phil and his inner circle" on Tuesday despite the weather.

Approximately 8-12 inches of snow is expected to fall in Punxsutawney, Pennsylvania — the 5,500-person town where the annual celebration takes place — by the end of Monday evening, according to AccuWeather.com.

"The event will take place virtually no matter the weather," a spokesperson says. "We never cancel because of weather."

Prior to the snowstorm, Punxsutawney Groundhog Club's president, Jeffrey Lundy, had confirmed on their website that the annual event, which typically brings in thousands of visitors, would take place virtually due to COVID-19 concerns.

"The health and safety of our faithful followers and everyone associated with Phil's prognostication has been our number one priority," Lundy wrote in a statement on Nov. 17.

"Today we announce that Phil, along with the Inner Circle, will be making his live annual Prognostication from Gobbler's Knob this coming Groundhog Day February 2nd 2021, but it has been determined that there will not be any in-person attendance or guests on the grounds as the potential Covid risks to overcome are too great," Lundy added.

To ensure that people can still watch Phil come out of his burrow and potentially see his shadow, Lundy said they will be running a live stream through the Pennsylvania tourism website.

Want to get the biggest stories from PEOPLE every weekday? Subscribe to our new podcast, PEOPLE Every Day, to get the essential celebrity, entertainment and human interest news stories Monday through Friday. Get a taste of the podcast below. The stream is scheduled to start at 6:30 a.m. ET on Tuesday, with Phil expected to leave his burrow and observe the weather conditions at 7:25 a.m.

Other virtual events and interactions are also expected to take place, including the option to have people buy a crowd cutout of themselves to appear at Tuesday's ceremony, according to Lundy.

"We want to assure Phil's fans that even though the 2021 celebration will look different, the Inner Circle is excited to develop numerous virtual events and new opportunities to celebrate Groundhog Day," he wrote. "We look forward to the day when we can welcome back all our guests and faithful followers, hopefully in February of 2022."

The origins of Groundhog Day date back to the early days of Christianity in Europe, according to the Pennsylvania Tourism Office.

Born of a winter festival called Candlemas Day, the celebration found churchgoers bringing candles to be blessed. If the skies were clear, it meant an extended winter was in the forecast.

In the U.S., Groundhog Day dates back to the 18th and 19th centuries. Pennsylvania German settlers pulled the tradition from European weather lore that used the appearance of hibernators, like badgers, as a sign it was time to prepare for spring. The Pennsylvanian German folk had to work with their surroundings, and so they decided on the groundhog to replace the traditional European animals.

Meanwhile, the Punxsutawney Groundhog Club records date back to 1887, with the club protecting and caring for Punxsutawney Phil.

Though Phil predicted last year that an early spring was on the horizon, the National Oceanic and Atmospheric Administration previously reported that he is only right 40 percent of the time.

"You're better off trying to decide what the rest of February and March will look like by flipping a coin," said CNN meteorologist Judson Jones.

Punxsutawney Groundhog Club records also showed that Phil is far more likely to see his shadow and has only predicted an early spring 20 times in the last 133 years.