The clips, which have been shared on platforms including TikTok and Instagram, have led to some people accusing the diners of ‘animal cruelty’.

However others have stepped up to defend the practice, noting it is ‘part of culture’ in certain parts of countries including South Korea and China. 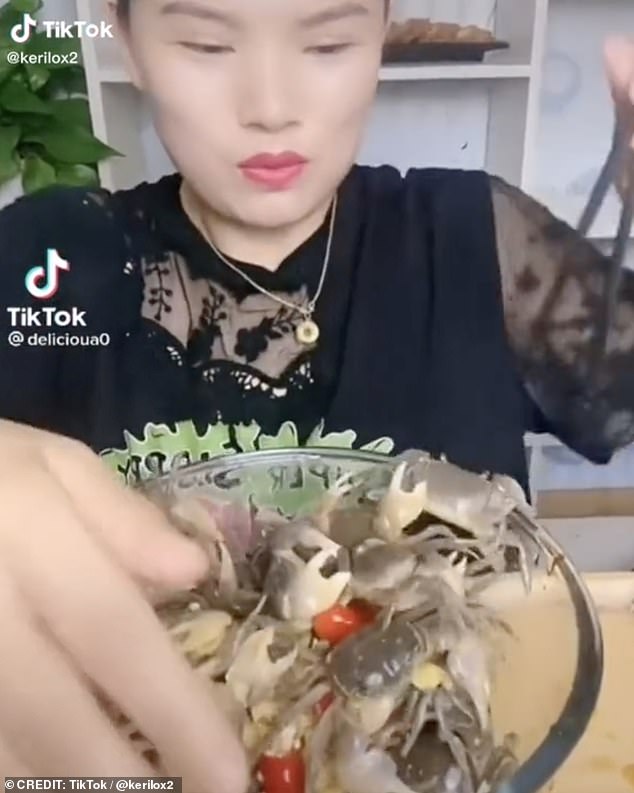 Social media users have been left divided over videos showing people eating live crabs. Pictured, a grab from one of the clips shared on TikTok

Two clips posted online show women sitting in front of a bowl full of live crabs. They pour spices and alcohol over the dish to season, then eat the crabs whole.

The videos have horrified some viewers, with some saying that it is cruel and could lead to health troubles.

One posted: ‘This is how you get a parasite’. Another wrote: ‘Why wouldn’t you cook them?’

However another woman stepped in, saying: ‘This is the sort of thing that my Korean church was divided on. 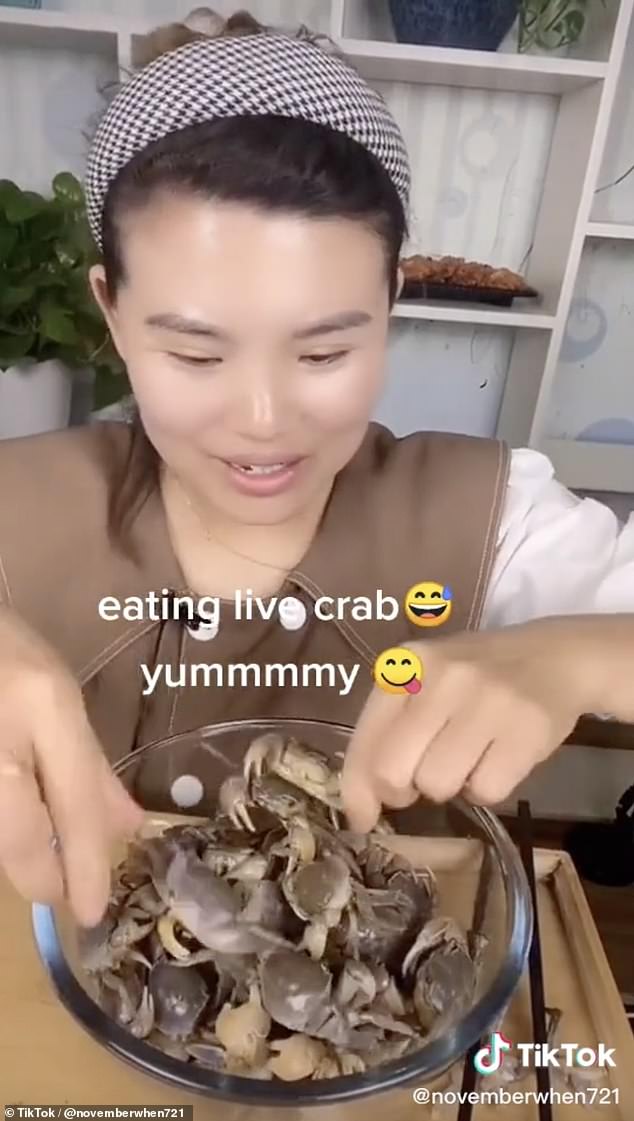 A woman was seen eating live crabs, crunching them in half in an ASMR video on TikTok. Such videos have proved divisive, with some claiming it is ‘animal cruelty’

The clips, which have been shared on platforms including TikTok and Instagram, have led to some people accusing the diners of ‘animal cruelty’

‘My mother said it wasn’t common and that this would happen in small villages, we used to see an old man doing it – but my mother was against it and said that it was cruel.’

Another wrote: ‘It’s part of their culture don’t hate.’

Others rushed to clarify that it is not a widespread practice, in response to some of the racist comments being posted.

One wrote: ‘I have eaten live seafood in Asia, certainly in mainland china but it is NOT widespread, this isn’t a common thing.’

Some viewers were fascinated by the idea, with one asking: ‘Can someone tell me if it’s safe to eat that because I want to try it.’ 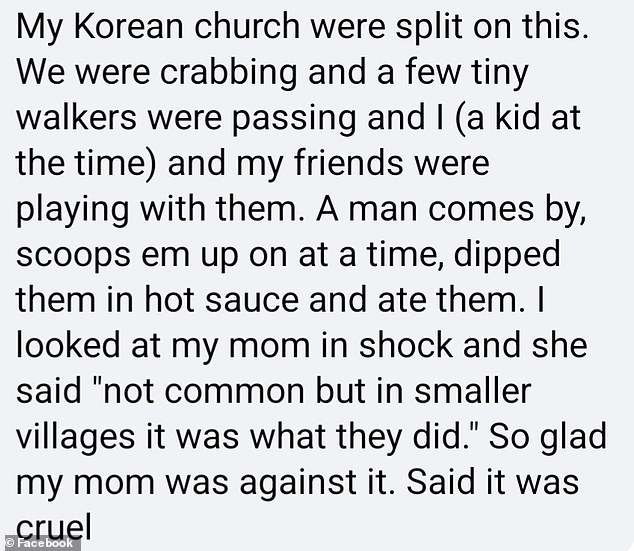 However others have stepped up to defend the practice, noting it is ‘part of culture’ in certain parts of countries including South Korea and China

The practice of eating live seafood is nothing new, as delicacies like drunken shrimp- where live prawns are marinated in sauce, beer and then devoured, have been enjoyed in coastal regions of Asia for decades.

There are risks surrounding eating raw seafood such as catching tapeworms and other pathogens that cause a severe impact to human health.

Debates around the sentience of sea creatures have come to a head in recent years, with the UK declaring several sea creatures sentient.

The move followed the findings of a government-commissioned independent review by the London School of Economics and Political Science (LSE) which concluded there is strong scientific evidence decapod crustaceans and cephalopod molluscs have thought and feelings.

Similar doctrines state that octopus must be killed humanely in the EU since 2016.

In 2013, The Atlantic reported that live crab vending machines were found in Hangzhou China.

Mr. Liu, the vending machine’s owner, said: ‘Crab shops like ours, they generally close at night.But what are people to do at night when their stomach starts to feel empty and they want to chow down on a hairy crab and knock back some booze?’