Forget about wearing an ice-cream container with eyes painted on the back. And don't bother adding spikes to a bike helmet.

Bird trainer Paul Mander believes magpies are way too intelligent to fall for those tricks. 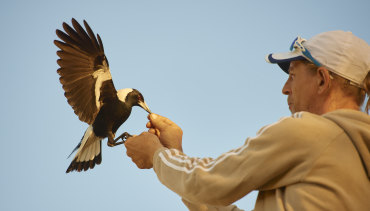 The best response when swooped by an angry magpie, he says, is not to run or wave your arms around. Just stop, look at him – it will almost always be a mature male protecting a nest – and make sure he knows he is being watched while you leave his territory. If necessary, walk backwards.

"When you react in a frightened way to a magpie swooping you, they know they've already won so they'll push and push harder if they're getting the reaction they're looking for," Mander says. "If you stand and keep your eyes on the bird, it will pull up and land in a tree. It will never swoop and hit you."

A bird trainer for film and television, Mander believes the magpie is sadly misunderstood.

He considers them among the most intelligent of birds, up there with the pelican. At least as smart as dogs or cats and surprisingly playful, even as adults.

"Their intelligence is much higher than predatory birds and their memory retention really stands out," he says from the Gold Coast, with warbles from an aviary in the background. "They pick up things very quickly and they remember things from the day before, which is a great training tool."

Mander trained eight magpies for the Australian film Penguin Bloom, a warm-hearted drama based on a real-life Sydney story about an injured chick that helps Samantha Bloom and her family recover after she is paralysed in a fall. It opens in cinemas on Thursday.

As well as two decades training birds for the likes of BeastMaster, The Lost World and the remake of Storm Boy, Mander runs a show at a Gold Coast theme park. 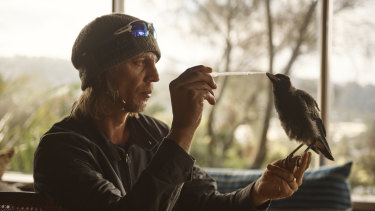 “Their intelligence is much higher than predatory birds and their memory retention really stands out”: Mander on the set of Penguin Bloom. Credit:Roadshow

Having become fascinated with birds as a child – his father was a falconer in England – Mander lives on a property with about 60 macaws, eagles, falcons, buzzards, parrots, owls and other birds that "free fly" during the day and return to their cages at night.

He considers a 22-year-old wedge-tailed eagle named Soren to be his best mate. "But all my birds are like friends, like family," he says.

For the film, Mander trained the magpies to respond to hand signals by rewarding them with mealworms that had been refrigerated so they were alive but still. "The more positive reinforcement you can give them, the better your relationship is with the bird," he says.

With the filmmakers wanting as few digital effects as possible, he taught the magpies to interact with the actors, take a teabag out of a cup, bounce on a trampoline and, in stages, pick up a woollen toy monkey in a hallway, carry it into a bedroom, jump on a bed, put it on a pillow, then fly out a window. 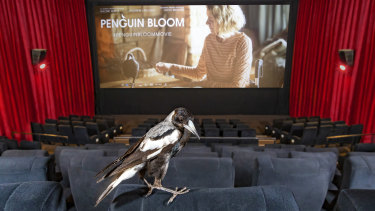 Promoting the film: one of the trained magpies in a cinema. Credit:Richard Walker

Mander was nearby when a magpie shat on star Naomi Watts' head and the trickle went down her face into her mouth.

"It was one of those moments where everybody didn't quite know how to react, especially me," he says. "There was a bit of a silence then when Naomi broke into a smile and laughed, everyone else laughed." 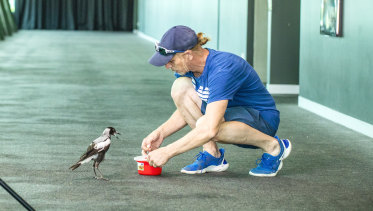 Mander, who kept a young magpie named Swoop for his open-door aviary after filming, while the others went back to their owner in Adelaide, is hoping Penguin Bloom will help Australians understand there are many sides to a bird with an unjustly bad reputation.

"Seeing them being a member of a family – Penguin became a big part of the Blooms' recovery – it's a beautiful story," he says.