One day I woke up and realised I didn't want to be in my life anymore. The moment of my awakening happened as I walked across a field on a farm in Queensland.

It was a fine day last year, fresh, blue. One of the two sisters who lived on the farm was off somewhere on her tractor. The other was inside the house, making a cake. 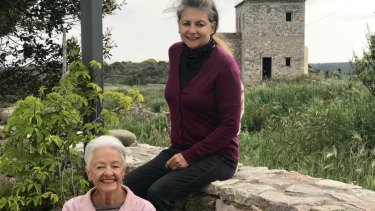 Author Susan Johnson, right, and her mother Barbara at their new home on Kythera.

Both had recently given up their jobs – one as a school teacher, the other as a social worker – to live more economically humble lives, but to feel free. In their late fifties, they had reached that stage in life when work is seen only as confinement.

As I walked across the grass to inspect an embarrassingly fertile wisteria, twisting along a wooden fence and breaking into a froth above a rusted gate, I experienced a blossoming of my own.

"I'm going to resign," I thought. I felt a giddy rush of freedom.

To get from there to here – living on one of Greece's least known Greek islands with my 85-year-old mother – naturally involves a back story.

It's not as if I've never known freedom from the slog of nine-to-five. I've stepped into freedom several times, most notably after a few years of uni and work, when I took what would now be called a "gap year".

It won't matter if I die there because I'll be in paradise anyway.

I was 21 and possibly it was that year which fatally set my compass towards Greece. One of my closest friends at high school was Greek-Australian, her family part of the worldwide Greek diaspora stretching back to Alexander the Great, via the sacking of Smyrna and the arrival in Australia of thousands fleeing poverty in the wake of the Second World War.

It was Maria (of course she was called Maria) who introduced me to Kythera. Roughly 40km long and 17km wide, at the meeting point of the Ionian, Aegean and Cretan seas, just off the Peloponnese, Kythera is Greece in all its drama.

Homer mentions it in The Iliad. In Greek myth, Kythera is the birthplace of Aphrodite, the goddess of love, who sprang from the sea when the seed of her father, the sky God Uranus, fell into the water along with his genitals, cut off in a rage by his son. Later, Zephyros, the Greek god of the west wind, blew Aphrodite in her famous shell across the sea to Cyprus.

And why wouldn't she be born near one of Kythera's bays of clear, bright water, below cliffs of volcanic rock shaped by winds that howl like the furies? Kythera is close to the Hellenic arc plate and earthquakes come with the territory; much of the island is rocky, mountainous terrain, inhabitable to nothing except goats and the kind of small, tenacious plants that look as if they could do with a break. 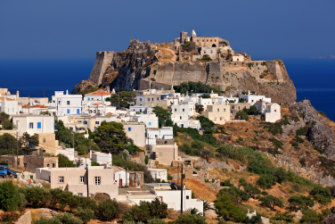 Much of Kythera is habitable only for goats.Credit:Shutterstock

The hard scrabble life on Kythera was the impetus for the people of Kythera's migration, many to Australia. The Andronicus coffee family are Kytherian, as was director George Miller's father, Jim, (originally Dimitri Milliotis) who ran Miller's General Store in Chinchilla, plus many thousands of less well-known migrants, whose kids became doctors, lawyers, architects, housewives, nurses and shopkeepers.

Back in 1978, Kythera had not long had electricity. In those pre-internet days, my parents didn't hear from me for weeks at a time: I could have been sailing in my own shell to Cyprus for all they knew.

Forty years later, I was well acquainted with adulthood's harnesses. Jobs, mortgages, divorces (two!) and – most life-changing of all – motherhood, had sank the good ship Solipsism. Not even a shell remained.

There I was, back in journalism, after years of scraping a living writing books. I was back where I began, on the very same Brisbane newspaper where I had started as a cadet reporter. My career goes bung indeed.

I was the sole breadwinner. Then – as in much of life – events coalesced: at work there was talk of voluntary redundancies; next, my younger son declared his intention of going back to London where his father lives, closely followed by my elder son, who was about to graduate.

It was around then I visited that sunny farm. It took me a while to weigh up the cost benefits between jumping free into open air and staying in one of the few remaining full-time journalism jobs in Australia – with sick pay, holiday pay and superannuation – where I could (hopefully) remain till they kicked me out at 67, clutching my fistfuls of money.

But I'm built for slipping the net. I learnt the art at my father's knee: my late father, John, was forever quitting the premises. As a young newspaperman, he chucked in his job to become a patrol officer in Papua New Guinea. Aged 21, he flew off to meet tribes who had never seen a white man.

Later he worked as a businessman, returning from America or Japan with tales of snow piled 12 feet high, bearing gifts of chocolate-covered ants.

Aged 40, he once again lit out for parts unknown, leaving corporate life in Sydney for a pineapple farm in Queensland. He knew nothing about farming, or pineapples.

My mother, Barbara – like many women who came of age in the 50s – was the accompanying act, the one who – as far as I could tell – did the boring bits. She never quit the premises, except to travel with my father on business trips or later, her three children grown, to fly to remote Queensland mining communities in her job raising money for the Miss Australia Quest. 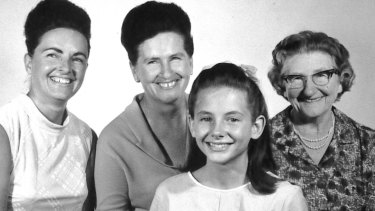 She was a renowned beauty herself, working as a model before her marriage, in between jobs as a florist and secretary, as well as being a radio and nightclub singer. She was a mother at 22.

My mother definitely wasn't part of second wave feminism. For a long while, my goal was not to be her.

But what is motherhood but a large slice of humble pie? Who was there when I suffered the consequences of a birth trauma, resulting in a 19-month temporary colostomy? Who flew to Hong Kong when my first marriage collapsed to help me pack up the debris of my hopes?

Motherhood is a lesson in forgiveness. In becoming a mother myself at the age of 38, I forgave my mother everything. My own mothering mistakes rendered me not only humble, but merciful.

Following my father's death in 2010, mum and I grew close. Her flat was near mine and every weekend we had a meal or saw a movie. 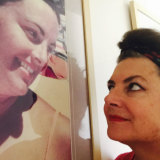 Following my father’s death, my mother and I became close.

I discussed with her leaving my job, as well as ideas about how I might survive financially, joking that a (relatively) impecunious novelist could live more cheaply in Bali or Greece. I'd become entranced with Greece again, after I returned in 2017, when one of my novels was translated into Greek.

"Would you come to Greece with me?" I asked. I couldn't leave her behind.

"Why not?" she replied, "it won't matter if I die there because I'll be in paradise anyway."

When mum told her sister-in-law she was moving to Greece she responded, "What? What did you just say?"

My brother, Steven, was enthusiastic. "Look, she's 85, we know what's ahead. Does it matter if she's here or there?" He thought she would enjoy the same activities she enjoys at home – doing crosswords, planning meals, cooking and reading – except with an added view of the Peloponnese.

But it turns out getting medical insurance for a healthy 85-year-old planning to be out of Australia for at least a year is virtually impossible: we ended up going to an American company, paying the best part of ten thousand bucks (Steven, mum and I split the cost).

Next, mum's Greek residency visa (I didn't need one because I also have a UK passport). Who knew she would need to fly to Sydney to apply in person, clutching her police check and negative syphilis results?

But what is motherhood but a large slice of humble pie?

"If I had syphilis at my age I'd be dead," she said, choosing to be amused rather than insulted.

At last we crawled out from beneath life's accumulated crust – the car and house insurance, the direct debits for electricity, rates, internet, Foxtel. I was still trying to cancel mum's Telstra account in the airport departure lounge.

When we finally reached Kythera in the first week of March, we discovered it was in the grip of one of the coldest winters on record. Did my mother approve of the house we had rented for the year? She did not. 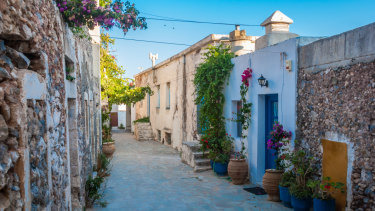 Tourists are deterred from visiting Kythera by tenuous electricity and the occasional earthquake. Credit:Shutterstock

The taps were all wrong. The doors wouldn't close properly. It was too cold. For Mum, anything below 20 is too chilly. The more she complained, the more I kicked back. "No wonder you've had two husbands!" she announced during one fight.

Our house is in one of Kythera's oldest, heritage-protected villages so, although built in 2004, it resembles a traditional village house. It has a fireplace: I learned to build fires again, except I failed to remember that in high winds smoke blows straight back down the chimney, smoking out a house within seconds.

And let's not forget the blackouts. Electricity on Kythera is still tenuous, possibly one of the reasons it has been protected from mass tourism. That night smoke choked the house coincided with the lights going out: mum rushed upstairs to open the doors to let the smoke escape and the furious wind crashed in, and neither of us could shut the door again.

Was that the same night as the earthquake? In my mind's eye, we are standing, laughing, pressed up against a door in the dark while the earth shakes. We laughed later, too, with some new Greek friends we had somehow made, who brought us gifts of fat lemons, so many mum had to look up lemon recipes, so that our fridge and cupboards are now full of lemon curd, frozen lemon juice, lemon pies.

No wonder you've had two husbands! she announced during one fight.

And olive oil! Most families on the island have a couple of olive trees – if not hectares of them – and everyone brings us olive oil, each claiming it to be Kythera's finest. Adonis brought us a gift of his homemade tsipouro (a Greek version of Italy's grappa, made from the residue of the wine press), so potent I worried about him drinking it while smoking at the same time. If he didn't blow himself up it was possibly because he was protected by love, like his namesake the Greek God, although we don't yet know if his arrow is aimed at mum, or at me.

At midnight on Easter Sunday, the village church rang loud with bells. Candles passed from person to person; as we left church birds flew off from the bell towers, fireworks waking sleeping children. Alithos Anesti (truly, he is risen) cried the faithful, dazed with light.

Here in paradise we hardly know the rules. We are currently looking for a new house. But we feel free, and alive.

Susan Johnson's new novel, From Where I Fell, will be published next year. She is working on a memoir of her travels in Greece with her mother.