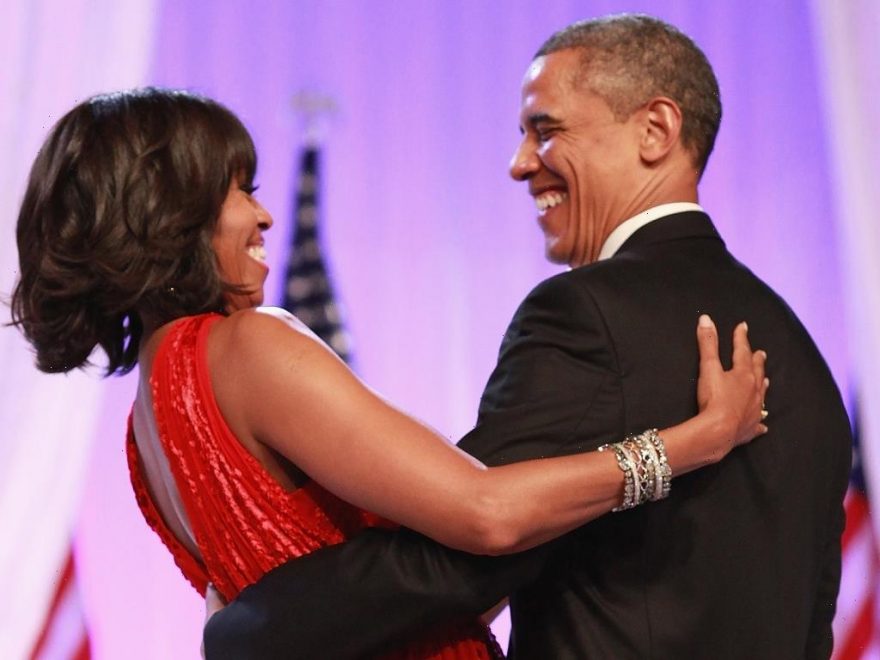 As Michelle Obama celebrates her 59th birthday, we’re looking back to October 1992, when her and tied the knot — and though we didn’t know it at the time, began one of the sweetest and most #RelationshipGoals marriages the country has ever seen. Sure, they occasionally bicker and have disagreements (which they are totally honest and open about), but their union has pretty much been totally free of scandal and drama. And we have the sweetest Barack and Michelle Obama pictures to prove it.

These two are so supportive of each other’s goals, so into parenting, so totally into each other — still, after all these years — we can hardly take all the cuteness. And on top of it all, they are way too photogenic at the same time.

Since they’ve been gone from the White House we’ve had fewer opportunities to see them interact and lead together. Even though they still have each other, we need them too. Let’s take a walk down memory lane with some of their best moments as a couple caught on film.

In celebration of his wife’s milestone birthday, Barack posted this romantic shot of the two of them on Twitter. Hugging as they watch the breathtaking view together, these two could not be any more cuter!

What do the Obamas do when they have five minutes to get silly in a photo booth? They whip out these classic poses and share it with the public like the Good Samaritans they always have been. 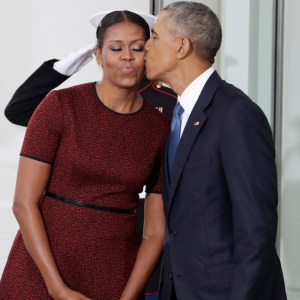 This had to have been a moment of so many emotions. Taken at the White House on Jan. 20, 2017, it was the last day the Obamas were president and first lady as well as the first day Donald Trump would be in office. Still, they are steadfast and steady as they hold hands and share a kiss. 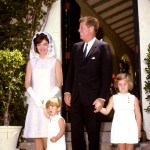 
A Look Back at Presidential Families Through the Decades

Only the Obamas Can Make Nose-Picking Adorable 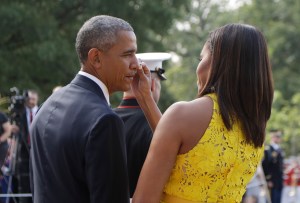 One thing we love about the relationship of the Obamas is that they are super-real. Most any married couple can identify with this moment in 2016 when they were awaiting the arrival of Singapore Prime Minister Lee Hsien Loong and Michelle spotted something in or on Barack’s nose. The intimate moment was caught on film, and we are just positive they are going to be a couple until the end of time.

The Couple That Reads Together… 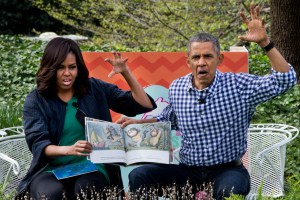 Sure, we are adults, but that doesn’t mean we don’t want Barack and Michelle Obama to read us Where the Wild Things Are on the White House lawn on Easter. We love their mutual dedication to kids health and education, and in this picture, they just look so totally in tune with each other and into what they’re doing.

An Intimate Family Moment at the White House

Another thing we love about the Obamas? Despite their big dreams and big ambitions, they are first and foremost always a family. We love this intimate shot Michelle posted on Instagram that captured their day-to-day life living at the White House — a situation that was far from normal but that they made as normal as possible for their girls.

Embracing at an Event 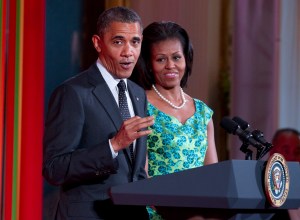 Sometimes in Barack and Michelle’s pictures, you can see exactly how cute and adorable this couple will be when they’re seniors decades from now. No strangers to little moments of PDA, they stole a quick peck during Michelle’s “state dinner” for 54 kids who won her “Healthy Lunchtime Challenge” back in 2012.

An Intimate Moment During the Swearing-In Ceremony 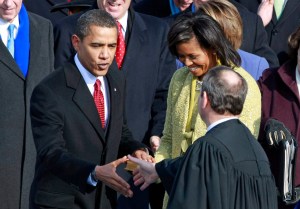 What’s cuter than holding hands? When you’re being sworn in as the president of the United States and your wife holds the Bible for you. This was a historic moment for the country and an especially huge milestone: Barack entering office as the first Black president with his partner by his side. We still get a little weepy thinking about it.

The Fist Bump Seen Round the World 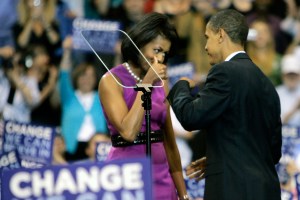 Too cute! This moment took place the night Barack found out he had won the Democratic primary in the 2008 election, and it truly symbolizes the deep, amazing partnership he has with his wife. In fact, fist-bumping might be our true love language — we just didn’t know it until now. 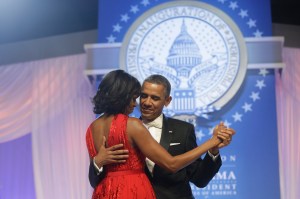 The new POTUS and First Lady looked so stunning in Jason Chu as they danced the night away at the Inaugural Ball in 2013.

Going on 28 Years of Adorable Moments

One of the craziest things about Barack and Michelle Obama’s relationship is they have been married for over 25 years now — and they were being cute decades before the country even knew who they were. Here’s proof: a shot of the couple on their wedding day as Barack playfully takes off Michelle’s bridal garter.

Here’s to many more sweet moments between this former president and first lady.

A version of this article was originally published August 2020.

Before you go, click here to see which celebrity couples have been together the longest. 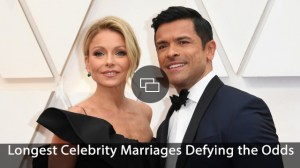