Anthony Albanese paid tribute to people “rostered on somewhere” on Christmas Day in his first Christmas message as prime minister, as Opposition Leader Peter Dutton reflected on what he said had been a “difficult year for Australians”.

Albanese said Christmas was a day for relaxing with family and friends” but also central to the faith” of many Australians. 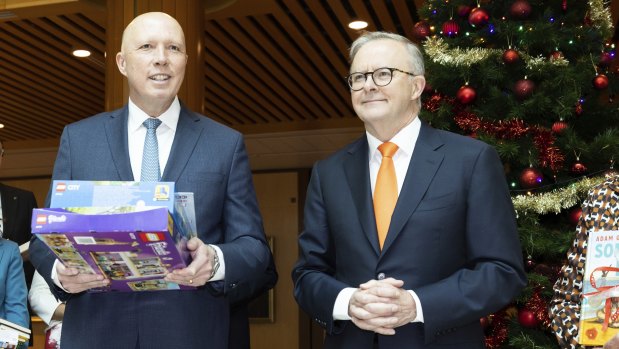 However, he also expressed gratitude to people missing out on festivities with family and friends.

“Of course, not everyone gets to take it easy. If you’re rostered on somewhere, I want to say ‘thank you for your service to others’,” Albanese said.

“If you’re working because you’ve volunteered your time to make Christmas better for your fellow Australians, whether you’re serving lunch to those in need or you’re keeping our beaches safe, I want to express my gratitude and my admiration.

“The same goes to all our emergency service workers, and of course all Australian Defence Force personnel, whether they’re serving here, or far from home overseas. Thank you to every single one of you.”

Albanese concluded his festive message by singling out another hard-working Christmas worker.

“Whatever form Christmas Day takes for you, may it be a very happy one,” he said, “and may Santa be good to every child.”

Dutton reflected on what he viewed as the challenges of 2022 in his first Christmas address as opposition leader.

While Australia had seen off the worst of the pandemic, he said cost-of-living pressures “continued to hurt families and small businesses”.

“Millions of our fellow citizens had their personal data compromised in the hacks on Optus and Medibank,” he said.

Dutton also said many Australians had experienced the “darkest of days” with floods damaging or destroying their properties “and tragically, of course, a number of families have lost loved ones”.

“I want to say a very big thank you to the emergency service workers, to police, to first responders, to volunteers, and to the men and women of the Australian Defence Force – not only helping so many Australians during the floods – but also for all of those who will be on duty during Christmas at home and abroad,” he said.

Dutton also noted the “terrible news” of the death of Queen Elizabeth II, who he said embodied “the very best virtues and values”.

“Whilst it’s been a difficult year, it’s the Australian way that we show gratitude for what we have. Christmas is a time for Australians to again express thanks for how lucky we are to live in the best country in the world,” he said.

“During Christmas, I hope all Australians have time to rest and to celebrate with family and friends.”