In 1937 Sydney photographer Harold Cazneaux travelled to the Flinders Ranges in South Australia to see, in real life, the trees and landscapes he admired so much in the paintings of Hans Heysen.

"The passing of the years has left it scarred and marked by the elements – storm, fire, water," he wrote later. "Although aged, its widespread limbs speak of a vitality that will carry on for many more years … I stood before this giant in silent wonder and admiration. The hot wind stirred its leafy boughs and some of the living element of this tree passed to me in understanding and friendliness, expressing the spirit of Australia." 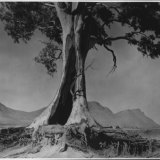 Cazneaux framed his shot like a Heysen image, cutting off the canopy to focus the attention on the strength of its mottled trunk and tangle of half-exposed roots. After a few false starts he called the image The Spirit of Endurance and it was one of his most successful, a symbol of hope in the middle of the war.

The tree, now called the Cazneaux Tree, is still standing – it's thought that river red gums can live for between 500 and 1000 years. As a long-time admirer of Cazneaux it was the first thing I wanted to see when I visited Wilpena Pound. It's signposted – not that you'd miss it if you'd ever seen the picture. It stands on a flat plain above a dry creek bed, supported at a respectable distance by some junior family members, like an aging queen attended by her courtiers. It looks ancient, just as it did 80 years ago, and inspiringly stoic.

River red gums are the iconic tree of much of our river and creek landscapes, charting the movement of water even when the water isn't visible. Sinker roots grow deep and are particularly effective at conducting water into the body of the tree, though the tree's long-term survival is dependent on occasional surface floods. In long, dry periods, the tree sheds leaves to reduce water loss. The last big floods at Wilpena were in 2007 and Cazneaux's canopy is thin, though it retains that sense of persistence against the odds that so moved Cazneaux. 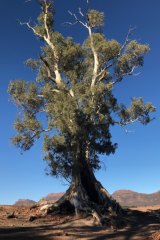 The Cazneau Tree is still standing – it’s thought that river red gums can live for between 500 and 1000 years.Credit:Robin Powell

I tell you this now because tomorrow is National Tree Day, a moment to consider our relationship with trees, the various ways in which they move us and their importance to our survival (new research suggests planting trees, billions of them, is the easiest, quickest, cheapest way to remove two-thirds of the carbon dioxide in the atmosphere that is driving global warming).

If you live in the City of Sydney you can find out more about the local trees you love in the council's Significant Trees register, which describes individual trees' importance as botanical, historical, cultural and aesthetic treasures. Whether your favourite tree is significant to others or just to you, tomorrow is the day to honour it.